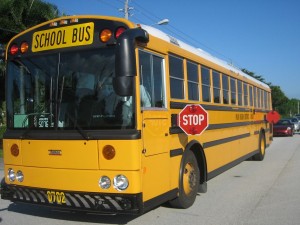 According to recent remarks made by NHTSA Administrator Dr. Mark Rosekind for the National Association for Pupil Transportation, the National Highway Traffic Safety Administration will shift its position to endorse 3-point lap/shoulder seatbelts on school buses.

As NHTSA’s administrator, my primary role is as the leader of our agency. NHTSA has not always spoken with a clear voice on the issue of seat belts on school buses. So let me clear up any ambiguity now: The position of the National Highway Traffic Safety Administration is that seat belts save lives. That is true whether in a passenger car or in a big yellow bus. And saving lives is what we are about. So NHTSA’s policy is that every child on every school bus should have a three-point seat belt. NHTSA will seek to use all the tools at our disposal to help achieve that goal, and today I want to launch a nationwide effort to get us there.

Is this a change in position? Yes. But it is consistent with NHTSA’s role as the guardian of safety on America’s roads. It is consistent with decades of progress in raising seat belts in the minds of the public from novelty to nuisance to “the car doesn’t move until I hear that click.” Seat belts are icons of safety. And that makes them the single most effective thing we can provide to improve the confidence of parents, policymakers and children. Without seat belts on buses, there is a gaping, obvious hole in our safety measures that sparks questions all of us have to answer. With seat belts, we can build momentum for student pedestrian safety, enhanced enforcement, and more. 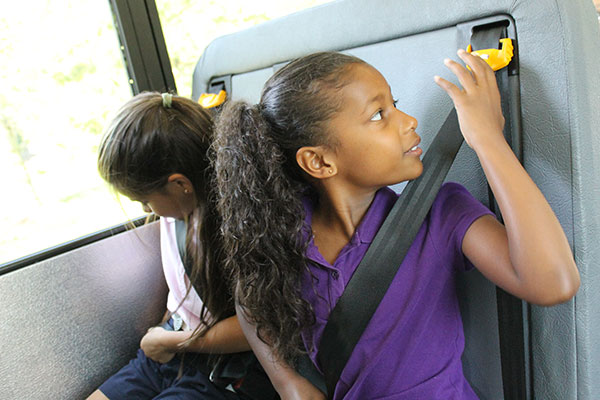 While school buses are among the safest methods of transportation due to size, mass, visibility, driver experience and other factors, seatbelts would make them even safer. Seatbelts would also make large buses compatible with child safety seats for younger kids. Smaller school buses are already being transitioned to lap and shoulder belt systems. Concerns include cost and passenger capacity, which could reduce the number of children served by buses, possibly forcing some to other means of transportation. Currently, states determine if large school buses require seatbelts. Six states currently require either lap or lap/shoulder belts, but some of these mandates remain unfunded.

According to NHTSA, approximately 4 school age children (5-18 years old) who are occupants of large school buses are killed annually. Assuming 100% seat belt use, a Federal mandate for lap/shoulder belts could save 2 lives annually. Passenger car fatality rates are over 7 times higher overall.

It is still worth noting that most published comparisons between cars and buses use overall car fatality rates where fatal injuries are dominated by unrestrained occupants and crashes where the car driver is a teen or is under the influence of alcohol or other drugs. Overall rates also don’t take into account that many car fatalities happen with greater frequency during overnight hours, evening rush hours and during summer months when school buses may not be operating. So, the rates for a grade school child transported by a parent or adult caregiver in an appropriate restraint system in the back seat of a family vehicle would presumably be closer to the rates observed in school buses.

Even so, CarseatBlog applauds NHTSA’s new goal that could cut school bus fatalities nearly in half, and significantly reduce many more preventable injuries, making large school buses safer than any alternative. The consistency of message for a child to buckle-up anytime they are in a vehicle is also extremely important. The American Academy of Pediatrics also endorses such a policy.

The AAP recommends that all children travel in age-appropriate, properly secured child-restraint systems when transported in all motor vehicles, including school buses, to ensure the safest ride possible. The AAP further recommends that all newly manufactured school buses be equipped with lap/shoulder restraint systems that can also accommodate car safety seats, booster seats, and harness systems. The AAP recognizes the added benefit of improved student behavior and consistent habits of restraint use when traveling in motor vehicles. Policies on seat belt use have been found to improve student behavior and reduce driver distraction.