The all-new Sedona is a big improvement for Kia’s new “Multi-Purpose Vehicle.”  It’s arguably the sharpest looking minivan on the market with a tastefully upgraded interior and exterior.  It is also more flexible for families than before.  For example, all trim levels offer three full LATCH seating positions, two in the 2nd row captain’s chairs and a third on the passenger side of the back row.  The third row center seat has a 4th top-tether location as well.  The Slide-N-Stow feature in the 8-passenger trim offers the easiest 3rd row door access in any minivan.  There’s a lot to like with the new Sedona, but does it stack up to the family favorite, Honda Odyssey?

Let’s start with some basic information and features. Please note that since this video was made, the NHTSA awarded the 2015 Sedona a 5-star overall safety rating.  The IIHS updated its ratings methods for 2015, requiring an auto-brake front crash prevention system for its 2015 Top Safety Pick “Plus” award.  The new Sedona did very well in all the IIHS crash tests but did not earn the “Plus” award, since it lacks such a front crash prevention system.  Visibility is decent, with a standard rear-view camera on all but the lowest trim level.  SX versions get the nicer Surround view monitor.  Our Sedona also came with the accessory tablet holder is a handy feature, but it protrudes and is very hard so it seems like a potential risk to a child in a frontal crash.

In Part II of the video, we discuss some of the aspects of the second row in the 8-passenger trim as well as the third row that is common to both 7- and 8-passenger models.  In the 8-passenger trim, the second row should fit various 3-across carseat configurations, as the middle seat is wide enough for some carseats.  Since there is no LATCH or tether in the middle, that seat is best suited for a booster seat or a seatbelt installation of a narrow, rear-facing carseat.  The seat cushion and seat back side bolsters may affect placement of wider carseats in the second row.  In the third row, the middle seat is quite narrow and 3-across will be a challenge, but might be possible with a selection of very narrow carseats/boosters.

A Maxi-Cosi RodiFix booster and a Britax Frontier 90 combination seat (below, left) work well in the 7-passenger lounge captain’s chairs.  A Graco 4Ever carseat fits in the third row.  There is also a nice location to attach a rear-facing tether accessory strap under the driver’s seat leg for a rear-facing convertible that allows this, like a Diono Radian RXT. (below, right). 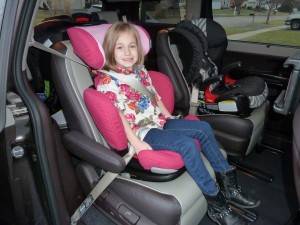 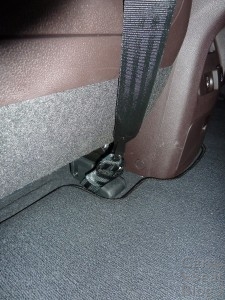 There is ample cargo space behind the third row seat (below, left).  The seats are relatively easy to stow and raise.  In the 7-passenger SXL trim, you have luxurious recliners in the 2nd row (below, right). 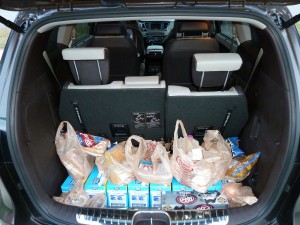 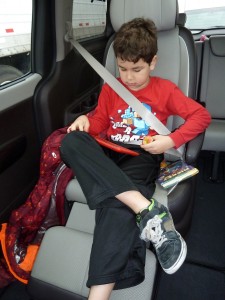 The previous Kia Sedona was a safe family minivan at a budget price.  The new 2015 Sedona is upgraded significantly in terms of appearance and features, but now commands prices similar to the Honda Odyssey and Toyota Sienna.  Families who want 8-passenger seating at the lowest price should seek out a Sedona LX with Convenience Package.  In addition to the extra 2nd row center seat, it also offers standard backup camera, dual power sliding doors, heated front seats, rear window shades, a cooling glove box and Slide-N-Stow seating.  It is competitively priced around $29,000.  That’s over $2,000 less than an 8-passenger Honda Odyssey EX or Toyota Sienna LE. Many families may opt for the mid-range Sedona EX with standard 8-passenger seating.  With the optional Premium Plus package to add rear cross traffic and blind spot alerts, it is nearly $35,000 MSRP.  For about the same price, the Honda Odyssey EX-L offers a better array of advanced safety features, better fuel economy and has more flexible options for child seating and cargo.

The high-end SXL with Limited Technology Package is the only trim to have a wide array of advanced safety features and also touts luxurious reclining seats like Toyota’s Sienna.    At over $43,000, it seats only 7 and manages only an estimated 17mpg city and 22mpg highway.  For comparison, an 8-passenger Honda Odyssey Touring trim costs over $1000 less with an EPA estimated 19mpg city and 28mpg highway.  Even so, the new 2015 Kia Sedona has a lot more to offer than before and is much more competitive with Toyota and Honda.  In particular, the Sedona LX trim with Convenience Package is one of the safest family vehicles available for under $30,000.

Thank you to Kia Motors USA for the Sedona used in this review.  No other compensation was provided.  All opinions are my own.