A common carseat conundrum that caregivers encounter is the issue of space in the backseat. Whether it is due to a small vehicle, a growing family, or vehicle limitations on where carseats can be installed, space can be an issue. With this in mind, Graco introduced the SlimFit All-in-One that is intended to solve some or all of your carseat space woes, especially compared to the similar Graco Milestone. Let’s take a look! 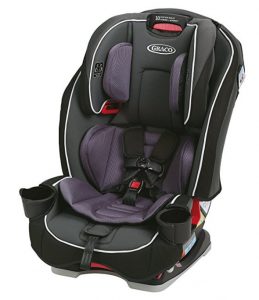 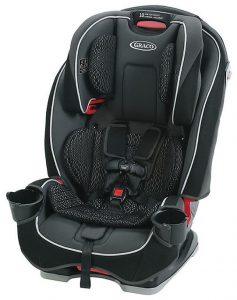 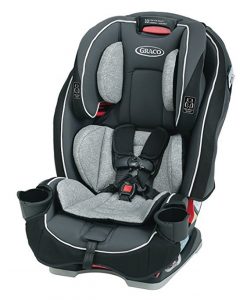 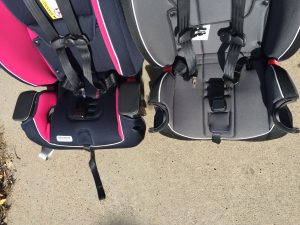 Overall, the SlimFit is very similar to what we found in the Carseatblog review of the Milestone with some minor differences noted here. This is because the SlimFit and the Milestone are nearly identical in terms of their features and are essentially the same product with the exception of fashions and a minor change or two. Above, you can see the Milestone without its optional single cupholder (left) and the Slimfit with its two cupholders retracted (right). They are so similar, in fact, that I was skeptical about whether the SlimFit really offered any additional advantages over my beloved Milestone. Could I really fit a SlimFit anywhere that I couldn’t fit my Milestone with its cupholder removed? Because I love the Milestone so much, I was more than willing to try the SlimFit and see if I could find a seat I loved even more. I am happy to say that I think I have! 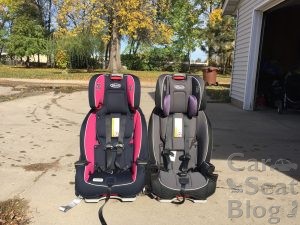 First of all, the installation of the SlimFit is very easy, just like my beloved Milestone. The instructions are very easy to understand and the seat features premium push-on LATCH connectors. Something I particularly liked about the Milestone was the easy access to the rear-facing beltpath. With a quick removal of a tab, you could easily get great leverage for pulling on a shoulder belt or lower connector strap. I was initially disappointed to see that the SlimFit had solid material wrapped all the way around the armrest, with no slit to pull the strap through. 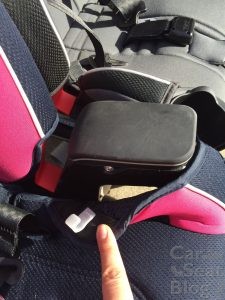 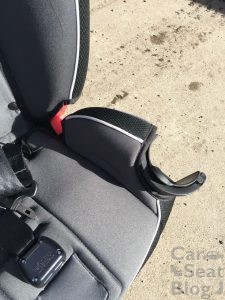 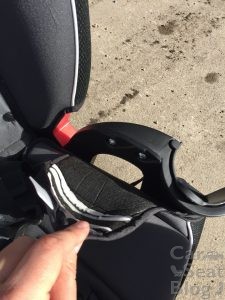 The SlimFit has the same recline positions as the Milestone: two for rear-facing, one for forward-facing with the harness, and one for forward-facing with the harness or as a belt-positioning booster. In my Subaru Impreza (2010) I was able to install it rear-facing with either of the two recline positions, although the more upright position was almost too upright in my vehicle, according to the level indicator. I was able to install the SlimFit and still fit comfortably in the front seat. I am 5’4″ — your mileage may vary, of course.

Forward-facing, the SlimFit installed easily with either the seatbelt or LATCH.

There are no issues when using the seat as a belt-positioning booster.

Installation Next to Other Seats

With only two children, I don’t routinely need to do a 3-across, but I do appreciate the ability to install seats side-by-side on occasion. This allows a third adult to ride in the vehicle, and it makes use of the center position, which is the safest place in the vehicle (provided you can get a good installation) from side-impact collisions. I particularly appreciated being able to install the rear-facing SlimFit in the center when we went on a road trip with a tall (6’3″) travel companion. Since we would be switching off drivers, it was important that neither the of the front seats be too cramped and that I not be switching the car seats around every time we stopped at a rest stop. Putting the SlimFit in the center meant that either of the front seats could be adjusted to a safe (if not ideally comfortable) position for my tall friend.

While the SlimFit definitely fits nicely next to other seats, it is not a guarantee that it alone will solve your space issue. I found that it was very important that the other seats be quite narrow as well. I was able to install the SlimFit next to a Combi Coccoro and an IMMI Go, which are some of the narrowest seats available. Below are two pictures of possible three-across situations involving the SlimFit — one features a forward-facing SlimFit and Diono Radian with a rear-facing Combi Coccoro in the center and the other shows two SlimFits (FF and F) and a Chicco KeyFit carrier (installed without the base). 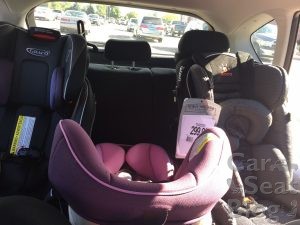 A rear-facing and forward-facing SlimFit could fit side-by-side very nicely. In fact, as you can see in the picture below, they puzzle together so well that in my vehicle they didn’t even touch one another. 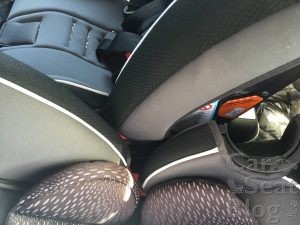 Again, all of these configurations were done in my Subaru Impreza, which is not exactly known for its spacious back seat. In some larger vehicles with more room to work with, the options for other seats may be more varied.

The SlimFit features a removable body support that can be used to provide a better fit for smaller babies. The body support is required if the child’s shoulders are below the lowest harness setting, but is optional for larger babies and children. There are also a removable headrest pillow and harness strap covers, both of which have no requirements for use. My children didn’t like the harness strap covers and didn’t need the body support, so we removed those. Both of them liked the headrest pillow and found it to be nice and cushy for sleeping. I do wish that the SlimFit had a buckle pad of some kind, but it’s not a big deal.

The belt fit was decent, but she was sitting as perfectly as she could. I would have preferred the belt to be a little lower for a bit of wiggle room on an actual car ride. We were just trying this out in our driveway — I wouldn’t be surprised if she had the belt up over her belly after even a short car trip. 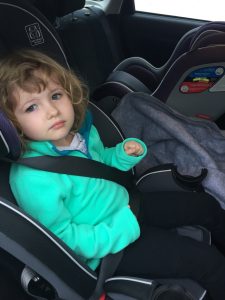 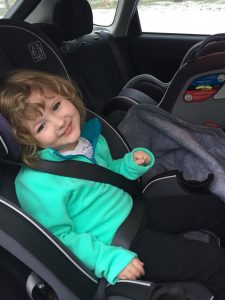 The belt guides are easy to use and intuitive, but like many combination/all-in-one seats, it was difficult to buckle. My daughter certainly wouldn’t have been able to buckle it on her own, and I as the adult found it very difficult to reach across to buckle her into her seat.

Moving the LATCH strap from the rear-facing beltpath to the forward-facing beltpath is easy and convenient. The seat has one LATCH strap which slides along a bar, making it virtually impossible to get it twisted or backwards in the process. Like on the Milestone, the harness components do not have to be removed when you change the seat to booster mode. To convert the seat to booster mode, slide all the buckles and clips together at the butt area of the seat and then store the harness components in the convenient storage compartment under the seat pad. The straps lie cleanly against the back of the seat and do not need to be removed. If you had had the seat installed with the lower connectors, then you can even make the switch to booster mode while the seat is still installed with the lower connectors and tether (Graco allows you to secure the SlimFit to the vehicle seat with the LATCH components as long as they do not interfere with the use of the seatbelt). 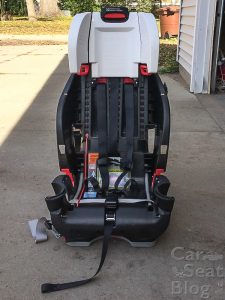 The SlimFit cover is relatively easy to remove and is machine washable. The cover is attached mostly with clips and elastic bands and the removal is quite intuitive. Just for fun, before watching any videos or reading the instructions for removal, I timed myself removing the cover. It took me 2 minutes and 15 seconds and didn’t cause me to rip anything or throw a tantrum. The Milestone cover is a little easier to remove, but the SlimFit really isn’t difficult. Re-attaching it wasn’t difficult either, although in the meantime you have to make sure you don’t lose the little white plastic anchors while the seat cover is in the wash.

The Graco SlimFit All-in-One is a compact, versatile seat for a wide variety of child sizes. With all the features of the Graco Milestone (plus dual cupholders!), the SlimFit is a clear winner when the prices are similar! The SlimFit is also scores an IIHS Best Bet Booster Rating.

So was the SlimFit really more versatile than a Milestone without the cupholder? Yes. I did do some comparison attempts with my Milestone to see if the SlimFit really made a difference and I can say that I was unable to get the same side-by-side installs with the Milestone. The shape of the armrests makes a huge difference. If you are looking for a great seat with virtually all the same great characteristics as the Milestone, but with the added benefits of increased flexibility in narrow spaces, the SlimFit is for you! 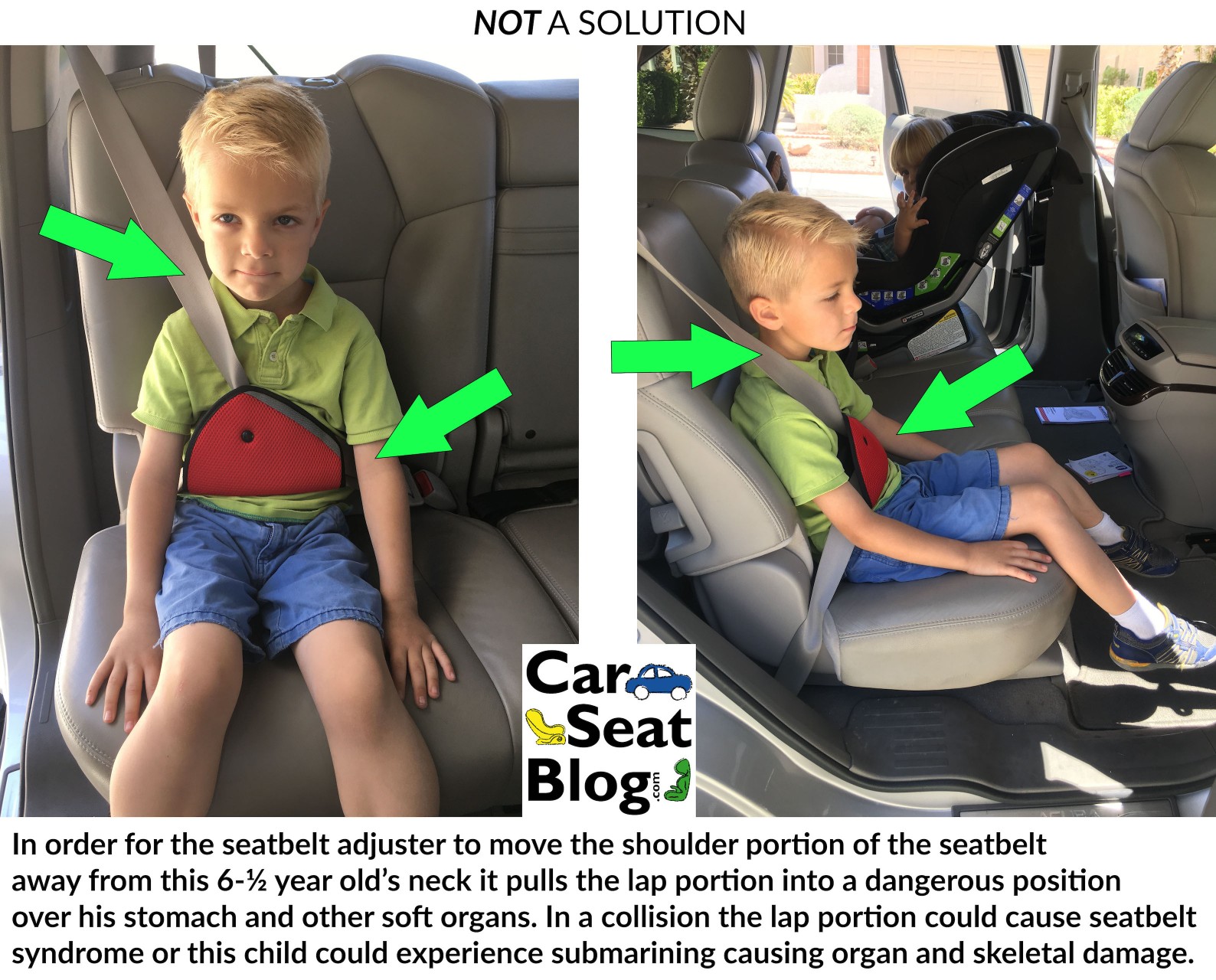