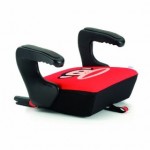 Before I even began this blog post, I was intrigued by the name Olli so I had to Google it.  What I learned is that the origin of the name is Finnish and it’s a short form of Olaf.  Olaf is of Old Norse origin, and its meaning is “what remains of the ancestors”.  Not sure what, if anything, that has to do with this product but I like the name Olli.  It’s cute, memorable and easy to spell – which eliminates the need for yet another child restraint acronym.  Plus, the Paul Frank Julius the Monkey designs are soooo cooool!

For those who may be unfamiliar with the

Basically, a backless booster is for older kids who rarely sleep in the vehicle and have outgrown a harnessed (5-point) child safety seat but don’t yet fit safely in the vehicle’s adult seatbelt.  The only proper way to assess whether or not an older child still needs to use a booster is to have the child sit directly on the vehicle seat, buckle them up and then determine whether or not the child passes the 5-Step Test.  If the child doesn’t pass all 5 steps (including the all-important 5th step) then the child still needs a booster to help the adult seatbelt fit properly.  The “boost” is crucial because if the seatbelt doesn’t fit the child the way it’s designed to fit us adults then the child could actually be injured by the belts in a crash.

But the Clek Olli

is way more than just a basic, backless booster with a quirky  name.

It is a sad moment.  My trusty Cosco Triad is finally going to the carseat graveyard.  It was returned to me last week by a friend who borrowed it years ago.  I had forgotten all about it.  Though it served 3 kids very well in its day, at 8 years old it is beyond its useable lifetime, so it is headed to the junk heap.  The sentiment reminded me of this video…  Back in 1999, I became involved in Child Passenger Safety when I couldn’t get a Century Smartmove to fit in a Saturn SL2 sedan.  If an engineer couldn’t do it, who could?  (Well, turns out those happened to be among the most difficult carseat and vehicle combinations at the time but I didn’t know that!).  It didn’t seem like it should be rocket science, but in some cases it certainly is.  There was hope, though- a new system called LATCH was coming.  In late 2000, I bought one of the first LATCH carseats on the market, a souped-up Cosco Touriva called the Triad.  Despite the cumbersome 2-ring tether adjuster, it installed quite nicely in my 2001 Honda Odyssey, also equipped with LATCH.  Less than a year later, I made a webpage (that’s a link to the archived version that appeared in spring/summer 2001) to help other parents learn as much as I did.

Just a short recap on our Kia Sedona rental I mentioned previously.

Our 2008 Sedona proved to be an excellent minivan overall, really on par with the offerings from Toyota and Honda.  While there are some advantages and disadvantages as I mentioned previously, I think it will appeal to many families.  I’ll add to my earlier post that braking was very good throughout our trip, especially in the mountains.  Unlike the steering and accelerator pedal, I had no complaints at all about the brakes in terms of performance or feel.  Traction was solid on dry pavement, rain and even a couple hail storms on the Trail Ridge road in Rocky Mountain National Park. I drove it for a week and couldn’t come up with any major complaints at all.

The interior was really up to par, too. There were no rattles or squeaks of any kind. The controls all worked well and had a good feel to them, even though they were sometimes awkward in placement and function compared to our current vehicles. While this was an LX model without power sliders, the manual ones operated easily enough that our 7 and 9 year olds could open and close them.

The price is right too, as the LX sells for under $25k and even less when the big rebates are in effect. I wouldn’t trade in my Odyssey EX-L for one, but if I was shopping for a new vehicles at this price and had safety as a top priority, the Sedona Base would be a finalist.

As I wrote in a previous entry, we opted to take the Amtrak California Zephyr home, rather than fly.  Our youngest loves trains and we thought it would be a fun thing to do.  As a bonus, airports are always a bit stressful with 3 kids so the train had to be better, right?