I think one of the biggest challenges for a car seat company is when they already have an exceptional product on the market. Typically, it’s not that difficult to find ways to improve your existing product. But when you already have a great seat, like say, the Nuna PIPA, it’s tough to find ways to make it better. Nuna seems to have been working hard on this and for a great majority of families, I think they’ve knocked it out of the park. 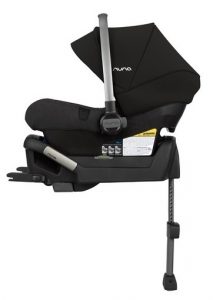 First, I’d strongly recommend you read our 2020 Nuna PIPA Review because the PIPA lite is, at the most basic level, a PIPA, and that review is a very thorough look at it. I’m not going to waste words retelling the PIPA story because I want to highlight the features of the “lite” model.

The PIPA lite and PIPA lite lx have the same exceptional base, the same stroller adaptivity, and basically the same dimensions. If you looked at one from a distance, you might not notice it wasn’t an original model PIPA. But when you get closer and especially when you get your hands on it, you can see the ways they’ve taken an already outstanding rear-facing-only seat and thoughtfully upgraded it.

What Makes it Lite?

So the base is the same, the shell is essentially the same and you might be tempted to dismiss the PIPA lite as nothing new, but you’d be wrong because there are some substantial differences between the original PIPA and the PIPA lite and these differences are big deals. 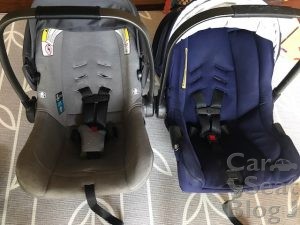 The original PIPA model weighs in at a very reasonable 9.4 pounds, but the PIPA lite (without the inserts) is only 5.3 pounds, making it the lightest rear-facing-only car seat out there. When the seat is empty, it’s almost unbelievably light for an infant seat, especially for such a solid seat made of quality materials. It’s so light you can literally carry it with a single finger. Once you put a baby in it, it’s not quite as light, but I will tell you, without hesitation, the difference in weight between my 4-month-old baby in the PIPA and in the PIPA lite is noticeable. Those 4 pounds make a difference.

I routinely have to carry several handfuls of kid paraphernalia out of the car in addition to the baby, and the PIPA lite is so much easier to carry than other infant seats. I often carry it with 2 fingers or hook it in the crook of my arm and even with Ben in it, it’s generally not the heaviest item in my arms. You might be tempted to dismiss the weight reduction as insignificant, but you would be wrong. I really mean that.

To make the PIPA lite so light, the folks at Nuna had to trim some “fat” from the original PIPA and adjust some of the materials.

What’s missing from the original PIPA?

The last time Peg Perego brought a new infant seat to the market we were pleased to see an anti-rebound bar and a parent-friendly seat belt lockoff integrated into the base. And now with the new Peg Perego Nido, they have upped the ante again. Not just an anti-rebound bar and a lockoff, not just anti-rebound handle position and European routing for baseless installs, but now the Nido can be added to the short list of American rear-facing-only seats featuring a load leg! Every part of the Nido is carefully thought out for safety and comfort and it more than lives up to the Italian word “nido”, or nest, as a safe and comfortable place for your baby when your family is on the go. 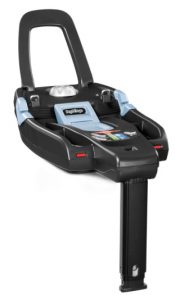 The base on this car seat is where it first starts to separate itself from the pack. We’ve seen rear-facing-only seats with load legs before and we know that they vastly improve safety by decreasing rotational forces in a crash. We’ve also seen rear-facing-only seats with anti-rebound bars that attempt to reduce rebound into the vehicle seat during the second phase of a frontal crash. But we haven’t seen both a load leg and an anti-rebound bar on the same base…until now.

The Nido base has a solid anti-rebound bar that goes against the vehicle seat back and a load leg at the back of the base. The load leg can be adjusted to 10 different heights and the Energy Management Foot at the end of the load leg is designed to crumple upon impact to help absorb some of the energy from a crash. There is an indicator on the base to show whether the load leg is fully engaged as well as red/green indicators to show whether the car seats is completely clicked into the base.

The base also features the “Right Tight System”, which is a seat belt lock off that provides a secure installation without requiring the belt to be manually switched into a locking mode. The anti-rebound bar, load leg and “Right Tight System” combine to create a base that is entirely unique and exceptionally well designed for safety.

I initially got interested in carseats when my oldest child was a baby and the first thing I learned was about extended rear-facing. Prior to having him, I had no idea that there was any real benefit and once I fell down that rabbit hole, there was no coming back. Very early in my research I was told by another parent that if a child is kept rear-facing, they won’t fight it because they don’t know any different. And I bought that line and handed it out like candy to my friends and family. Even more so once I became a CPS Technician.

My first child fit that mold perfectly. He rear-faced until he turned 4 and never once asked to turn around, despite having more than adequate language to do so. He truly didn’t care. 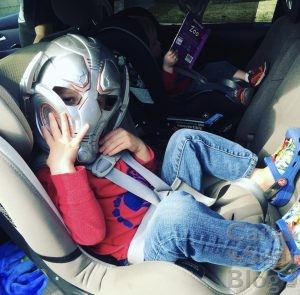 I was so sure this was my doing. I told his story far and wide – the story of how he didn’t know there existed any other option and he was perfectly comfortable and blah blah blah. I was always very polite and never shamed people for forward-facing within the limits of the law, but in my mind I thought they must be crazy. Kids will rear-face forever if you let (okay, make) them.

And then I had my second child. And look, I adore him. He is one of the cutest kids on the planet. He is incredibly smart and when he’s not screaming he’s pretty articulate for his age (2.5 years) too. But he’s also basically a honey badger. He does not care if you punish him, he does not care if you want him to do something. There is no hill too small for him to die on. No battle too silly to fight. His teachers at preschool have complemented me on naming him appropriately (his name is William, we call him Will) because he is exceedingly willful. 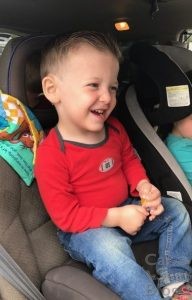 And my little honey badger, who is petite enough that he could rear-face to middle school, is miserable in his rear-facing convertible. Every single time we get in the car he climbs into his seat and sits facing forward. Sometimes he will ask me if I think he’s funny (spoiler alert: nope), sometimes he will just demand to sit that way, but the common thread is that each time we get in the car I have to wrestle a 24 pound honey badger to rear-face in the car and get him buckled before he planks out of the seat.

At first I thought great! I will nip this in the bud and then I can write something to help other parents with this problem. But well, please don’t hold your breath on that post because the only tip I have is to give myself an extra 5 minute cushion every single time we go somewhere so I can force him into his seat. My child cares DEEPLY that he is rear-facing and he has never faced forward a day in his life.

So let me publicly eat my words. Some kids care. Some kids care very, very deeply about rear-facing, even if they have never forward-faced. And some parents would be completely reasonable to want turn their honey badgers forward after age two, even if they had room to grow rear-facing (note: I’m not encouraging this, just saying I understand it and do not judge it for even a second).

As for me, I choose to fight the fight each day, partially in hopes that I’ll break his carseat spirit and partially because the kid didn’t get his stubborn streak from his dad. You don’t grow a honey badger in a vacuum.

To my fellow badger parents, I’m sorry. If you have figured out how to cure this problem, please share. I’m all ears. And maybe some tears. 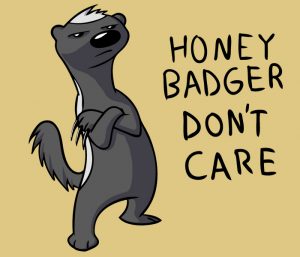 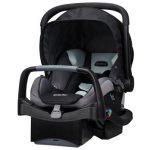 In recent years, Evenflo has been pushing the boundaries of carseat safety. They were an early adopter of side-impact testing and they were the first in the industry to implement rollover testing of their carseats. The SafeMax Infant Carseat with anti-rebound bar has passed all their arduous crash testing and features advanced safety and convenience features that will surely endear it to new parents all over the country. 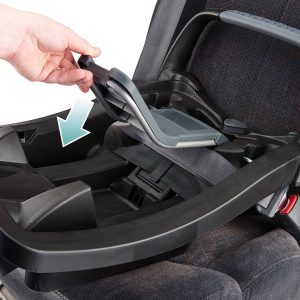 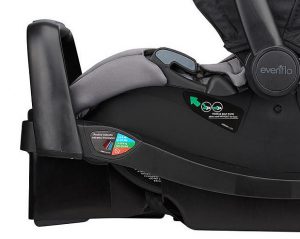 *There are 3 crotch buckle positions in the shell, but only 2 slits in the cover for it to route through. So while you can make the buckle a little bit shorter for a newborn, it will still emerge 4″ from the back of the seat.

**There are 3 hip width settings, but again, only 2 slots in the fabric. So once again, you can get the harness a little shorter by routing through the inner-most hip slot, but they will still emerge 5” apart. 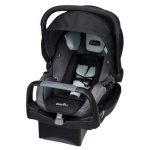