Back in February, I had the opportunity to join a number of child passenger safety advocates to preview Graco’s new, state-of-the-art crash testing facility that officially opened March 1st, 2011.  The new facility in Atlanta replaces their previous facility.  It’s based on a nearly identical system operated by MGA, the same company that does many standard certification tests for the NHTSA.  In this manner, Graco can verify almost exactly any results done at MGA’s facilities, whether by the government or other party.

Here is some information provided by Graco:

Graco’s crash testing facility is one of leading in the country for child restraint systems and is helping set the standard for other facilities.

•In the Baby & Parenting Essentials crash testing facility, the R&D team conducts nearly 3,000 crash simulations per year.
•The Décor GBU conducts 800 “pull” cycles per day per person per blind to test the durability and lifespan of its blinds
•Microscopes in the Beauty & Style lab can show if your hair has ever been colored (even once!) in your life
•An estimated 300 tons of concrete and 15 tons of steel reinforcement was used to construct the crash sled
•In the environmental testing chamber, temperatures can range from -92° to 302°F
•During a crash test, the total crash impact occurs in only a quarter of a second

One of the interesting things about this type of facility is that it runs in reverse of other types of crash test sleds.  Normally, you would picture a sled with a carseat being launched down a track and coming to an abrupt stop, with the data being taken as the sled suddenly decelerated as it hit the bumper at the end of the track.  In this type of sled, it is actually forcefully accelerated by a sudden release of extremely high air pressure and then the sled comes to a gradual stop.  It’s that momentary jerk at the initial launch that simulates a sudden stop, only in reverse. It can take a little while to wrap your mind around that when you see it.  A background as a test engineer helps, sometimes!

Here’s a photo of Stephanie Tombrello (SafetyBeltSafe U.S.A.) and I on the sled.  Stephanie had the honor of pressing the “launch” button for the first run down the sled! 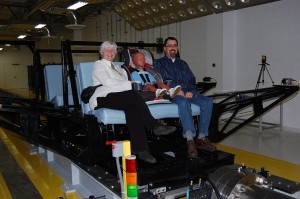 Thank you again to Graco Children’s Products for travel expenses and the tour of their facility and also for sponsoring our April anniversary giveaways at Car-Seat.Organd here at CarseatBlog.com.  Congratulations to all the winners of carseats, gear, mousepads and other prizes!