First and foremost, I’d like to say that we’ve been heaping a lot of well-deserved praise on Honda lately. Darren and I have both had the pleasure of reviewing and reporting on the new 2011 Odyssey.  Additionally, there was the recent release of stellar crash test results for this newest generation Ody from NHTSA & the IIHS which prompted yet another blog to sing the praises of a job well done by Honda.  Even here on the homefront, we have a new-to-us 2006 Honda Pilot sitting in the driveway and overall I’m very impressed and happy with our new vehicle.

However, with that said, there is one area of child occupant protection where Honda and their luxury brand, Acura, really fall short.  I’m talking about tether anchor weight limits.  To be fair, it’s not just Honda & Acura that have failed to compete in this category – Mercedes Benz & Ferrari also state the same low, uber-conservative 40 lb limit for their lower anchors and top tether anchors.  But it’s not a stretch to assume that there are far more children in the US riding around in the backseat of Honda vehicles than in all the others (Acura, MB & Ferrari) combined.  That’s why it’s so important for us, as advocates for child passenger safety, to attempt to bring some much-needed attention to this issue.  We are continually frustrated in our efforts to practice and promote best-practice recommendations for child occupant protection because our efforts are hampered by ridiculously low tether anchor weight limits.

For the record, I’m specifically referring to the numbers provided by the vehicle manufacturers themselves to the editors and researchers of The LATCH Manual, published by Safe Ride News.  For those who are not familiar with The LATCH Manual – it’s considered the premier reference resource used by CPS practioners for obtaining accurate and comprehensive information on all things relating to the LATCH system.  Unfortunately, in the current 2011 Edition of LATCH Manual, Honda continues to list 40 lbs as the maximum child weight for using lower anchors and top tether anchor in their vehicles.

In reality, the stated 40 lbs weight limit on the lower anchors isn’t a huge problem because there’s a simple and more-than-adequate alternative to using the lower anchors to secure a CR – it’s the old standby, the vehicle’s seatbelt!  However, in the vast majority of situations there is no simple alternative to reducing head excursion in a crash without using the vehicle’s top tether anchor.  Of course, this is only a dilemma if your child weighs more than 40 lbs and rides in a Honda/Acura/Mercedes or Ferrari (we should all be lucky enough to have this problem!) in a CR with a harness rated beyond 40 lbs.  But considering how many kids over 40 lbs are currently riding in higher-weight harnessed seats, this is an enormous problem that deserves immediate attention.

In comparison to the 40 lb limits stated by Honda, Acura, Mercedes & Ferrari – most other vehicle manufacturers either state higher weight limits or simply defer to the Child Restraint instructions for guidance on the issue of when to use (and when to discontinue usage) of lower anchors and/or top tether anchors.  Forward-facing CRs should be used in the manner that they were designed and tested to be used – which in most cases includes the usage of the top tether strap if a tether anchor is available.

To summarize, it’s not like Honda uses subpar tether anchor hardware compared to Ford, Nissan, Toyota or Volvo (who all defer to the CR instructions for TA usage).  All lower and top tether anchors have to meet the same federal standards mandated in FMVSS 225.  Why the engineers at Honda/Acura, Mercedes & Ferrari have greater liability concerns and/or less faith in the anchor hardware is a mystery to those of us who are not privy to their water cooler discussions.   And I’m not trying to over-simplify the issues – I just don’t understand what they’re thinking.  These low, arbitrary tether anchor weight limits are potentially putting children at risk for head injuries due to increased head excursion in a crash if the tether strap on the CR isn’t used.  These limits also tie the hands of CPS Technicians and Instructors as they attempt to promote and educate parents & caregivers on best practice recommendations for child passenger safety.

Hopefully, Honda (and all vehicle manufacturers) will quickly adopt weight limits consistent with today’s child restraint systems rated to 65 or even 80 pounds.  At the very least, they could defer to the child safety seat manufacturer for guidance on limits.  Providing no such guidance, as is the case with many Honda owners manuals, places both parents and technicians in a very confusing situation regarding an important safety issue. 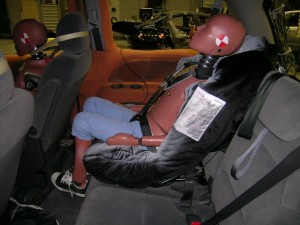