Home
Automobile Safety
2011 Nissan Quest Review: Is the Newly Redesigned Minivan for You?
Tweet Pin It

It’s been 7 years since Nissan came out with the original Quest and it was overdue for a redesign. They’ve had a history of having forward-thinking design with their minivans—no stuffy styling here.  And the Nissan engineers have continued in that tradition with sporty styling that says “Outta my way!”  I’ll be honest: I wasn’t all that impressed with the appearance of the 2011 Quest by what I saw on their website.  It was very 2-dimensional (and yes, I’m aware they haven’t come out with a 3-D home computer yet 😉 ), even as I dragged the slider around to spin the virtual van every which way and back.  I just didn’t see the lines that were supposedly there.  So, first impressions were dim.

But, I was excited to get away—an overnight mini-vacation in an awesome hotel—L’Auberge Del Mar!  For the rest of the journalists there

covering the “ride,” it was yet another day away from home.  I don’t get out much evidently.  When my driver pulled up in front of the hotel, there was a Quest parked right there in front for all guests to see.  I was impressed!  It looked *so* much nicer in person than on the website.  It looks small, but the length is within a half-inch of the new Sienna.  Perhaps it’s the shininess that caught my eye, the newness.  It is a very different-looking van from all the competition, and that is what Nissan is known for doing with the styling on its mini-vans.

Inside, the fit and finish were nicely done.  There were no rattles in the 2 vans my partner and I drove.  These were nice, classy vans that, once you drop the kids off at school, you’re not afraid to take your friends who drive Mercedes out to coffee in.

So, what is the new Quest?  Well, to start, it has 4 trim levels: S, SV, SL, and LE.  It shares the same platform as the Maxima, Altima, and Murano.

All trim levels have:

That’s where the similarities end.  While the base model does have some nice features, you really do have to upgrade to at least the next level, SV, to benefit from power sliding doors—a must-have if you are going to purchase a van.

Mom Likes (and Dad too!)

Carseats and the Quest

LATCH access: Hidden.  I felt it was difficult to access in the bight; my partner didn’t think so.  I had trouble shoving a deluxe LATCH connector onto a LATCH anchor.

There were 2 carseats available for installation, but not a lot of time for play since the goal of the day was to drive.  I had a Graco Nautilus and Chicco KeyFit to install.  The Nauti was pre-installed with LATCH and the seatbelt behind the driver.  I could see that LATCH wasn’t going to be a problem; it was going to be the seatbelt—duh duh duhn!  The buckle is several inches forward of the bight, but that’s par for the minivan course these days.  The problem in the new Quest is the stiff metal buckle stalk (see in the picture just how far up the buckle goes).  The buckle is perfectly positioned for installing rear-facing seats, not forward-facing seats.  I did get the Nauti installed with the seatbelt, but it was ugly and I had to recline the vehicle seatback to get the belt pulled tightly enough.  One of the Nissan executives is checking current LATCH weight limits for me, but the 2009 LATCH handbook states that Nissan defers to the child restraint manufacturer for LATCH weight limits.  Graco says that LATCH use must be discontinued at 48 lbs. at which time the seat must be installed with the seatbelt.

The KeyFit installed behind the passenger seat beautifully using LATCH and the seatbelt (separately, of course!).

Third Row: I have a bad feeling about this.  OK, I’ve probably seen Star Wars 100 times too many (thanks ds!) and should come up with a different line, but I do predict there will be major incompatibilities with the 3rd row.  The buckles are placed high in the bight and I’m concerned that even kiddos in boosters might have improper lap belt placement because of it.  The Quest also has stadium seating in the 3rd row, so a high-back booster on its tallest setting might have problems fitting—speculation on my part since I didn’t have one available to me for trial.  The center position has 9″ of space between the buckles.

I hang my head in shame: you dangle something shiny and new in front of me and all my good sense takes leave.  I forgot to look for rear-facing tethering spots.  Next time I will have Kecia and Darren text me mid-evaluation to remind me of such key things.

The test drive to Balboa Park was great.  The van drove solidly: acceleration was smooth, quick, and powerful.  Braking was average new car: we weren’t on a driving course, so we couldn’t do any special maneuvers to test the brakes.  Steering was tight and had a sporty feel to it.  Nissan went with a feel-the-road steering concept rather than a more assisted steering concept because they wanted the driver to have a more fulfilling driving experience.  I did notice it but it wasn’t fatiguing in the way my dh’s Datsun 240 Z was that didn’t have power steering (talk about building some nice-looking arms by driving *that* car).

Yeah, you may have to search a bit to find carseats that will work, just like with the last iteration of the Quest.  As with *any* vehicle, you need to find a carseat that’s compatible with your vehicle.  And the van really was nice . . .

Geez, this is the part I don’t like.  There were a few things that just didn’t work for me.  Some were minor, some were major.

It’s noteworthy to mention that the Quest is made in Kyushu, Japan.  It’s a Japanese vehicle from a Japanese company.  Even though they have their American headquarters in Tennessee, these vans are from Japan.

Our test drive was provided courtesy of Nissan USA at a press launch event in December.  Please note: the opinions and content given are strictly those of CarseatBlog and were not submitted to us by Nissan or any other entity, except for certain photo content.  No compensation was accepted, beyond travel expenses to attend the media event. Thank you to Nissan USA and L’Auberge Del Mar for a great event! 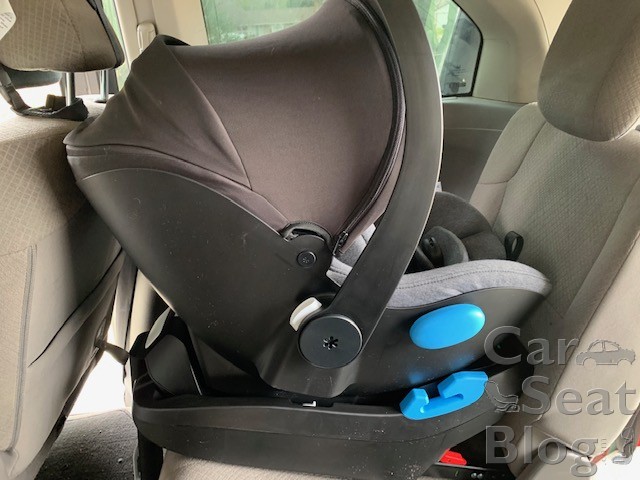