Perhaps one of the longest awaited convertible seat launches in carseat history is the Peg Perego (pause–any guesses here?) Primo Viaggio convertible seat. The market has been anticipating the arrival of a convertible seat from Peg for longer than I would hazard a guess at, and according to the aptly-named Nicolas Perego their newest seats should be hitting the market early next year. Although the convertible carseat market is fiercely competitive right now, it does seem that the PV Sr. should at least hold it’s own in the current marketplace.

I had this opportunity to meet with Mr. Nicolas Perego at the ABC Kids Show in Las Vegas to discuss the company’s newest seat. What became immediately clear was that the show displays were prototypes, and many of the details of the seat are not yet set in stone with the company. Many of the details Mr. Perego was able to provide on the seat are still tentative as the product is still in the development stage. 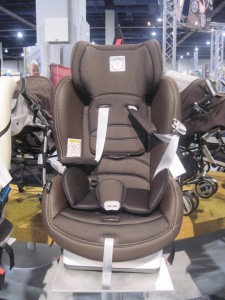 Here’s the skinny on the stats–skinny, indeed; The Peg Perego Primo Viaggio Sr. is expected to have a 65lb forward-facing weight limit, with a current estimate of the rear-facing weight limit being 30lbs but “maybe 35-40lbs”. The occupant total height estimate is 49″, and because I was seriously lacking a tape measure at ABC (as if I didn’t already feel like a pack mule?) I didn’t get to measure the top harness height on the prototype. The overall height looked very similar to a Britax convertible, as would be expected with that 49″ number. Rear-facing tethering seems to be on Peg’s radar, but there’s no confirmation either way by the company. Nicolas did confirm a 22lb forward-facing starting weight, but that remains to be seen when Sr. hits the market… And when might that be?

According to Mr. Perego–initial production may begin in Italy, and then later be moved to their United States production facility. Initial production is expected this Winter (Dec-Jan) and there is some possibility that Sr. will hit the Canadian market shortly after hitting shelves in the United States.
As the Italians say…Non lo so! Peg really doesn’t seem to have much of anything set in stone, but we hope they will look to Carseatblog.com for a comprehensive review when the first production seats come off the line!

Aww, who couldn’t love the adorable folks at Peg Perego? They were wonderful hosts at ABC, and after looking at the Primo Viaggio Sr., I moved on to explore my other obsession… 😉