This guest review is posted on behalf of Peggy G., winner of a contest on our forums earlier this year for a Britax Frontier 85.  You can read my review of the Frontier 85 here.

My grandson Kindon is 4 years 10 months old, is 45” tall and weighs 42 pounds. He rides in a Graco Nautilus in both of his parents’ vehicles after having outgrown his Sceneras by height shortly after his second birthday. He had recently been riding in a Turbo Booster in my vehicle after outgrowing the Marathon I had for him by height (he’s definitely all torso). While this worked okay for short rides, he clearly wasn’t ready to be boostered on longer trips since he would flop over out of the seat belt any time he fell asleep. Needless to say, I was thrilled to log in to Facebook on April 2 and discover my name listed as the lucky winner of the Britax Frontier 85 that was given away by Car-Seat.org and Kids ‘N’ Cribs. I was even more excited ten days later when it arrived on my doorstep so that I could reharness him in my van.

When I unboxed the seat, I really liked the cushiness of the seat cover. It just seems like it would be comfy for a long trip. I also liked the fact that the harness moves in conjunction with the headrest so that both would be properly adjusted at all times. It is also a very solid seat and feels like it would be very secure in a crash.

I first installed the seat in my minivan, a 1995 Ford Windstar with the infamous sliding latchplates (the last model year before locking belts were required) in the second-row driver’s side seat, getting a rock-solid installation using the long belt path and tether in under two minutes. To my great delight, the LBP also used up the entire length of seat belt, eliminating the need for a locking clip. The third row outboard seats provided an equally great installation, although the legroom in that area was somewhat lacking. I was even able to get an acceptable installation in the center of the third row, although that would be my least preferred choice of location in this vehicle due to the lack of a tether anchor for that position. 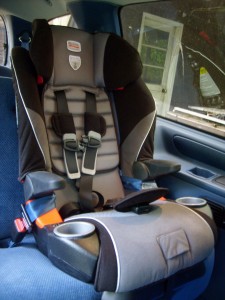 Next I tried installing the seat in our camping van, a 1989 Ford Econoline E-150 with lap-only belts in the second-row captain’s chairs. This installation took a little longer but by reclining the seat, buckling the belt (using SBP since it was a lap-only belt), and then popping the seatback up to vertical, I once again got a rock-solid installation. Since there are no actual tether anchors in this van, I tethered the seat to the third-row seat belt. The versa-tether allowed me to route the tether straps around the sides of the captain’s chair instead of over the top, eliminating any concern about the tether sliding off the side of the headrest and introducing slack. 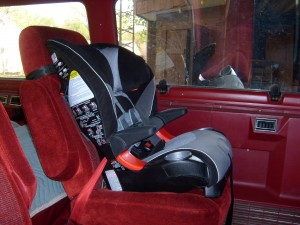 Finally I tried it out in the “little car”, our 1995 Ford Escort wagon. The center seat has a lap-only belt, so I installed the seat using the SBP and the retrofitted tether anchor. By pulling the end of the belt through the slits in the cover I was able to get an awesomely tight install in the center position, and with the Frontier installed I even managed to wedge my not insubstantial booty into the outboard seat and close the door. While I wouldn’t want to ride a long way like that it was certainly doable in a pinch. The outboard installation using the LBP wasn’t nearly as easy but I got it done. More than likely we won’t be using this seat in that outboard position since we normally drive the minivan if we need the extra passenger room or if we’re going any distance. 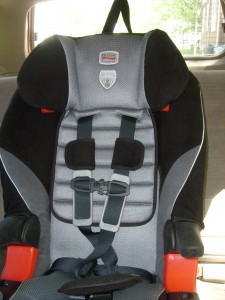 My grandson was delighted to have a new seat to try out. He sat in it in the house so I could get the harness height adjusted correctly and I was pleased to note that he has three more notches before outgrowing the harness height (versus the Nautilus where he is about ½” below the top harness slot. He of course loved the cupholders and the belly pad (also known as the “winky protector”). I strongly suspect that he’s a car seat geek-in-training.

Last week was the true test of the Frontier 85 when I installed it into Kindon’s mother’s Dodge Neon so that we could make an 800+ mile trip to visit my sister in Tallahassee, Florida. The LBP installation, while not effortless, was doable enough, especially at 9:45 p.m. in the dark (we were wanting to get a REALLY early start the next morning). Kindon was happy and comfortable in his seat during the entire trip. 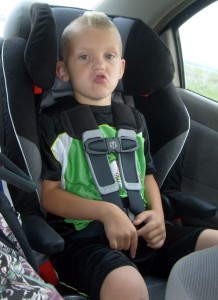 His head never flopped when he was sleeping (a common occurrence in the Nautili in his parents’ cars) and he never once complained about being uncomfortable. 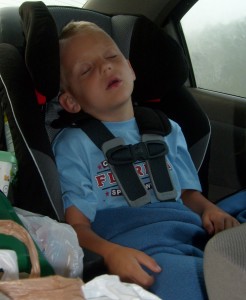 While we were in Tallahassee, we transferred the seat to my sister’s 2003 Honda Civic, and once again the installation was a snap, this time using the lower LATCH and tether anchor. 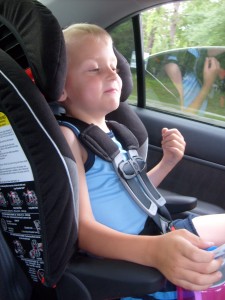 There are only a couple of downsides that I’ve found with this seat. The first feature that I find really annoying is the plastic harness shield in the back which persists in popping off virtually every time I move the seat. While I realize that this won’t be a huge issue on a daily basis, as I don’t anticipate moving the seat frequently, it’s certainly not the level of quality that I am accustomed to from a Britax seat. Second, the belly pad slips off the buckle almost every time that Kindon gets out of the seat. When I have time I can probably add a couple of stitches to either end of the slit to secure it a bit better, but again, with a Britax seat that shouldn’t be necessary. I’d also like to see the comfort pads on the harness lengthened an inch or two, as the non-twisty-ness of the harness causes the edges to be somewhat stiff and uncomfortable rubbing on Kindon’s neck when the pads slip out of place.

Overall I am incredibly pleased with the seat. Thanks so much to CarseatBlog.com, Kids’n’Cribs, and Car-Seat.org for sponsoring this giveaway. The Britax Frontier 85 has truly been a blessing to our family.