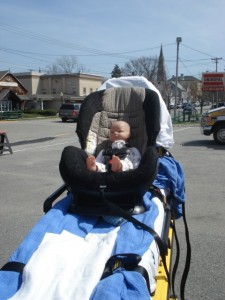 Sometimes, it’s the upside of a slow carseat check event – the opportunity to “play” with something new.  On this particular warm, sunny, spring day – parents were obviously busy doing something other than coming to the well-publicized check event.  That left us techs with a little free time.  At one point, some of the fabulous volunteers from the local ambulance corp showed up and the conversation quickly turned to transport of pediatric patients in ambulances.  I think I shocked a few of the local techs when I admitted that I had never actually installed a carseat on an ambulance cot (What? Something involving carseats that Kecia has never done??? Alert the presses! LOL)  Yes, I understand how it’s supposed to be done.  I’ve read the research papers and I’ve seen several presentations on the subject at various CPS conferences over the years but I had never actually done it myself.  Well, wouldn’t you know it – a short time later, an ambulance pulls up.  Yes, boys and girls – it’s play time!  😀

It was actually a fairly simple install on this nice, new Stryker cot with this particular convertible (Cosco Scenera).  For the record, the only type of conventional carseat that should be installed on an ambulance stretcher/cot is a convertible.  You really need to be able to secure the carseat on the cot using two different beltpaths and this is only possible if the carseat has separate beltpaths for the rear-facing and forward-facing positions.  Obviously, this setup is only going to work if the child actually fits in the convertible (and that will vary depending on the specific convertible model being used) and if the child can tolerate being transported in the semi-upright position.

First they showed me how to raise the head of the cot until we had it flush against the back of the reclined Scenera.  Then we routed the straps nearest the rear-facing beltpath thru that beltpath and routed the straps nearest the forward-facing beltpath thru that beltpath.  They helped me tighten everything up and Voila!  Next one of our local CPS techs strapped in our “non-critical pediatric patient” for good measure (and for the photo op)!  Finally, the guys showed me how to load this particular stretcher into the ambulance and secure it.  I have to say, I was really impressed with this particular Stryker Powered Ambulance Cot.  The hydraulic system was sweeeeet! 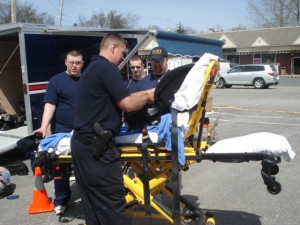 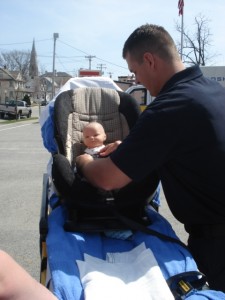 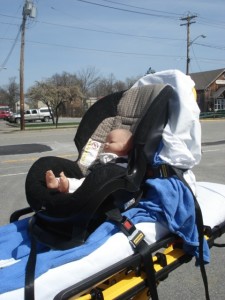 On this particular day, this exercise was all about learning something new in a relaxed and friendly environment.  However,  in reality, pediatric transport in an ambulance can range from “as safe as possible under difficult circumstances” to “downright scary for no good reason”.  Why does it vary so much?  Because currently there are no federal guidelines for pediatric transport in an ambulance.  Therefore,  EMS services are free to transport patients in any way they deem appropriate.  Personally, I probably wouldn’t allow either of my boys to be transported to the hospital in an ambulance unless they really needed to be attended to by a medic on the way there.  Unconscious and not breathing?  Massive head trauma?  Aortic Rupture?  Get him into the ambulance fast and I’m not going to care or worry about how he’s restrained.  Broken foot?  Get in the car and I’m driving you to the hospital myself.

For more information on the subject see “Crash Protection for Children in Ambulances”:  http://www.carseat.org/Resources/Bull_Ambulance.pdf 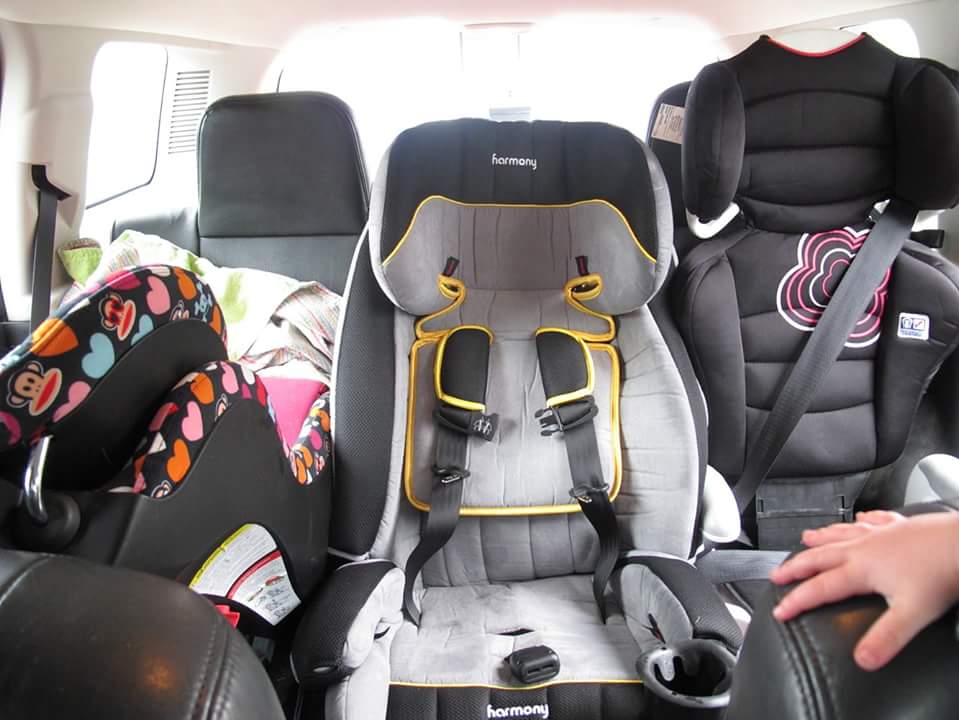