Sirona S in Black is currently in stock at BuyBuyBaby. Additional fashions and other retailers are coming soon! We will update when there is more information to share. 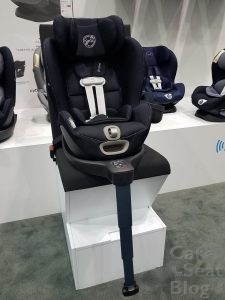 We’re thrilled that Cybex is working on an epic, game-changing convertible car seat: the Sirona S. Not only does Sirona S swivel 360 degrees for easy loading and unloading of children, it will also be the first convertible car seat in North America to have a load leg, a safety feature that significantly enhances crash protection in a frontal crash. As if that wasn’t enough, the Sirona S will also come standard with SensorSafe technology, which is built into the chest clip. 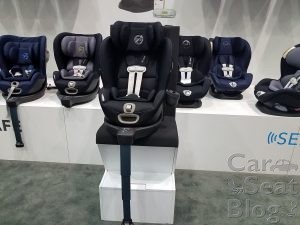 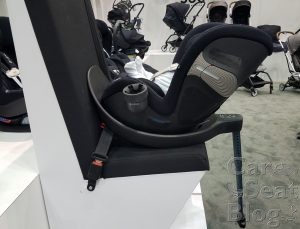 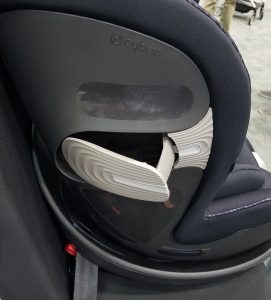 With features like swivel and load leg that are currently unique to the USA market, plus safety enhancements like LSP and SensorSafe, we deem it a “Shut Up and Take My Money” Award winner!  We acknowledge that $499 is a lot of money for a car seat but just like automobiles, innovations almost always launch on premium products and eventually work their way down to more affordable models. We hope consumers in North America understand and appreciate the safety benefits of a load leg because this is the evolution of crash protection for children! 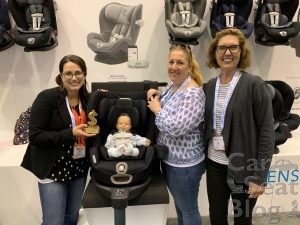 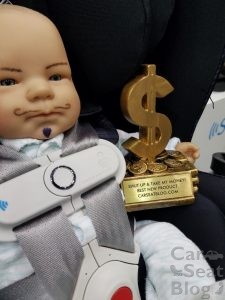 Better than a JPMA award!

The Sirona S has a single belt path for both rear- and forward facing, with a seatbelt/lower anchor belt tensioner for simple and secure installation. Once installed, the seat can swivel 360 degrees on its base, allowing parents to get kids in and out without having to lift them over the sides. This can be a convenience for any caregivers, but especially those who might have mobility difficulties. The swivel feature will also make it easy to switch between rear- and forward-facing for situations where two or more kids might share a seat. 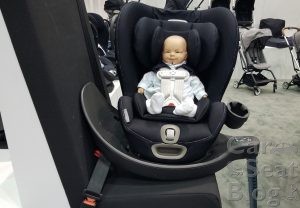 An indicator on the load leg will show when the seat is engaged in rear-facing or forward-facing mode since driving with the seat sideways will be neither secure nor allowed! 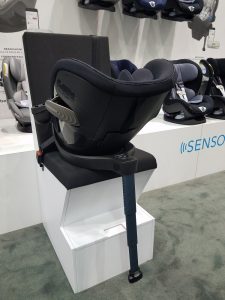 As usual, there is a tether on the back of the seat’s shell for forward-facing, and it would need to be unhooked from the tether anchor in the vehicle before you are able to swivel the seat when it’s installed for forward-facing use. We mused whether people would be able to use the load leg in place of the tether to potentially reduce head excursion (in situations where a tether anchor wasn’t available) but at this point, we aren’t sure if that’s even a possibility. Due to current federal regulations, car seat manufacturers can’t use the load leg to comply with FMVSS 213 standards since the test bench doesn’t have a floor. Cybex is testing the seat with load leg using a modified 213 sled, but even then, legal issues (including mandatory tether usage in Canada) make it seem unlikely that Cybex will ever say it’s okay to use the load leg as a substitute for using the tether. Keep in mind that all seats in the US have to pass testing with and without a tether so it’s almost always possible to install a forward-facing car seat without tethering it, **if there is no tether anchor available**. (Note: there are some exceptions for seats rated beyond 65 lbs. in the U.S. that REQUIRE tethering and all forward-facing seats in Canada REQUIRE installation using the tether). The bottom line here is that this is uncharted territory in North America, so it’s going to be complicated for Cybex to navigate these waters.

Cybex plans to release the Sirona S in the United States in fall 2019 with an eventual release in Canada (no timetable for Canada at the moment, sorry). The seat will retail for $499. Stay tuned for more information and a full review when production-model seats are available.

Watch our video for a demonstration of key features. (Note that the seat is NOT actually in full recline position when Kecia states it is. The prototype was a bit sticky. It does recline more for younger babies.)