I don’t generally consider myself to be a very creative parent. Mostly, my parenting is trial and (a lot of) error and motivated by a desire to just stay afloat and stave off a child-led coup. So far, so good on the last part, but it has been touch and go on many occasions. In one of these trial and error moments, we learned an important car seat related lesson and it came with a bonus we didn’t expect.

The way the lesson came about is a cautionary tale in itself, if we’re being totally honest. My oldest son, who was newly 6 at the time, refused to get out of the car one day. We had unbuckled him from his seat, but he just would not budge. He was mostly just joking around and we knew it, so we called his bluff and closed the van doors and went inside the house. I do not recommend this, this isn’t my parenting hack and it ended up being really scary for him and fully regrettable for us. I did not realize at the time that my son had no idea how to open the car doors, even though they weren’t locked. We waited just a few minutes for him to come in and then went out to retrieve him, thinking he was just being funny. But instead he was (understandably) pretty upset. 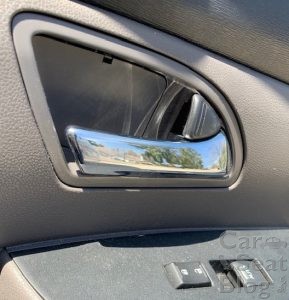 That night after he’d had some time to calm down and we’d had some time to reflect, we went to the car together and we showed him how to open each door, in each car, from the inside, just in case he ever needed to. We showed him where the locks were (both manual and automatic), how to open the trunk and how to use the horn for attention if he ever found himself stuck in the car again. We honestly didn’t realize until that moment how little he knew about the car because we had been doing all those parts for him. Since we had to open a door to free him from his harnessed seat, he’d never had the opportunity even to try to get out of the car on his own.

Once we realized how dangerous this lack of knowledge could be, how easily he could get trapped inside a car, we brought his 4 year old brother out and did the same, with more emphasis on how to get attention from others because we didn’t expect him to retain as many of the skills of operating the car doors/locks as his brother.

We knew that kids get trapped in cars all the time and that with summer approaching, the consequences of that can be tragic. But we were so sure that it couldn’t happen to us (as car seat aficionados) that we forgot to actually do the parenting things that would ensure that it wouldn’t. As we continued to think about the situation over the course of a few days, we realized that all of the things we taught him were useless if our son (and his brothers) were still trapped in their seats.

We spent the next few weeks teaching our oldest child how to get out of a 5-point harness. Fortunately he could reach the tab that loosened the harness in his seat, because he was able to get better leverage on the crotch buckle with a little bit of slack in the harness. But even still, about 50 percent of the time, he couldn’t get the buckle undone. So we showed him how to loosen his harness fully, unclip his chest clip and climb out. It wasn’t easy, and shoes had to be removed, but with enough slack he could do it. Once he mastered this, we felt like he had finally reached a point where if something happened, he could get out and get help. We didn’t teach his younger brother how to escape because we knew that he didn’t have the maturity to handle that particular skill and I didn’t want him climbing into the front seat while I was driving on the freeway. 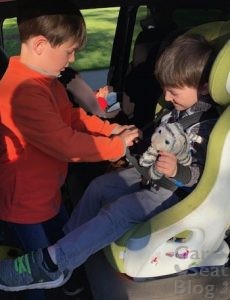 After all that effort, what I didn’t expect was the unintended bonus of all this practice. See, not only can my oldest son get himself out of his car seat and get out of the car, now he can get HIS BROTHER OUT. Like every morning at school drop off. Instead of me tromping around to both sides of the car to remove all the kids, now my oldest son gets himself out (he’s finally transitioned to a booster safely) and then releases one brother and I get the other. I don’t think he’s happier, but I am, and so it probably trickles down somehow.

There are a few morals here, but I hope you’ll take away from this that it’s important to show your kids how to get out of the car, even if you think they know and how to get attention from others if they’re trapped. And if you do that, you may find that in the end it doesn’t just make your kids safer, but it may make your life easier, too.