We were skeptical when we first heard about the hiccapop UberBoost inflatable booster seat. We typically hear about new seats long before they’re released, and since we’d heard nothing about this one, we suspected it might not be legitimate. It’s not uncommon to go on Amazon and find similar but dangerous, imported “seats” that don’t meet federal safety standards, such as this inflatable booster seat we “reviewed” a couple years ago. To be honest, I ordered this seat fully expecting to write another one of those “reviews.” Imagine my surprise, then, when I opened up the box to find what appears to be a totally legitimate product.

There’s a registration card attached to the product.

There’s what appears to be complete federally required labeling.

Then there’s the seat itself. Unlike the knockoff seat linked up above, the UberBoost feels firm and sturdy, not like a beachball. 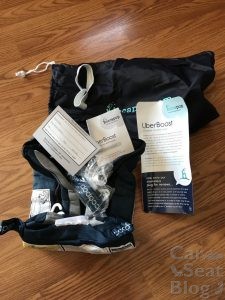 Some quick stats on the seat:

The air bladder is made of a very strong, heavy-duty vinyl. Fully inflated, the seat has barely any give when I push down on it. It feels more like a padded, conventional seat than something inflatable. 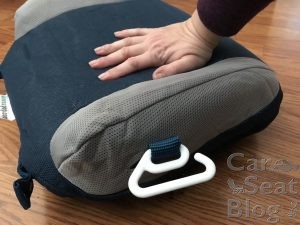 It’s a nice size–not too big that it’ll take up a lot of room, but large enough that it seems like it would be stable and supportive.

Grippy material on the bottom should help keep the seat from sliding around and should help keep it stable. I gave it a few nudges while it was sitting on the leather seat of my Odyssey, and I was impressed at how it didn’t move. 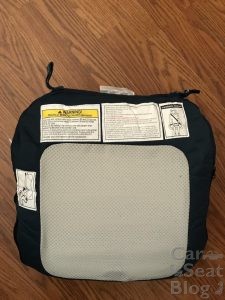 The shoulder belt guide has a clamp-type lock for easy adjusting. Simply open the clamp, pull the webbing through to make it longer or shorter, and close it up. 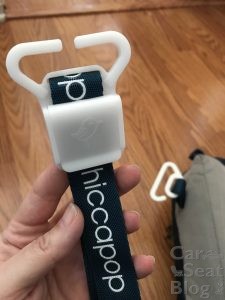 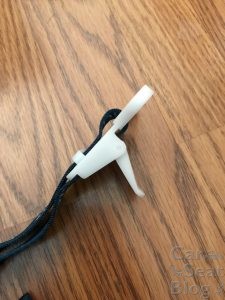 The informational card that comes with it is pretty hilarious. (I’ll admit this isn’t important and shouldn’t influence anyone’s decision-making, but carseat stuff can be pretty dry and serious, so this gave me an unexpected smile.)  You also gotta love that their website has a Rick Roll link at the bottom. 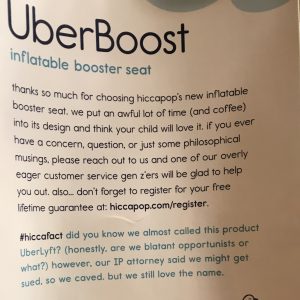 My kids had mixed reactions to it. My 9-year-old looked at it and sneered, “What is this?” (She was already in a bad mood and it was really cold out.) The belt fit was good on her, and didn’t need the shoulder-belt guide. She didn’t complain about comfort. 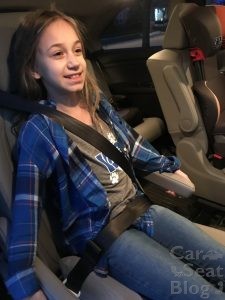 My 7-year-old looked at it and said, “Oooo! Squishy!” The lap belt fit him well but the shoulder belt definitely worked better with the guide. 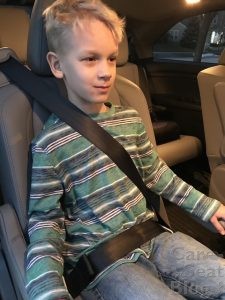 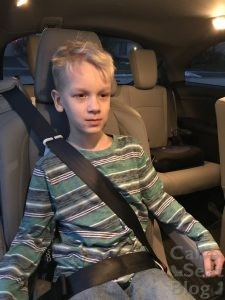 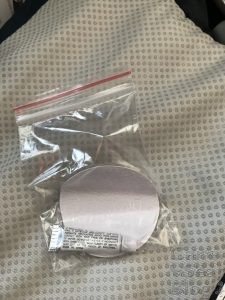 Unlike the BubbleBum (see our review of the original inflatable booster), the UberBoost contains no foam within the bladder. In the BubbleBum, the foam helps the seat hold its shape (and air), making it more difficult to deflate (which would be a good thing in a crash) and also providing some substance in the event it did spring a leak. In fact, the BubbleBum passes required testing even when deflated. The UberBoost’s Amazon product description says it’s “Designed To Prevent Popping Open And Deflating – The hiccapop UberBoost is constructed with a thick and durable vinyl bladder that will not give way to bursting open and deflating, even during rides over super bumpy roads.” That makes it sound like it has a guarantee against popping, which seems like a bold claim to make, especially since the seat comes with a vinyl repair kit.

We did speak to a representative from the company, which has a lot of experience with other inflatable products, and they said they did not test the seat deflated, as they didn’t expect it to significantly change the numbers and because the testing facility wasn’t sure they even could test it that way. The company does stand behind its products 100% and will replace any UberBoost that experiences leaking or is otherwise defective. So while there is no guarantee against popping, they claim there is essentially a lifetime guarantee to replace a leaking UberBoost.

Because the zipper for the cover is easily accessible from the front of the seat, and because the valve is also in the front, I’m concerned that a fidgety child could easily unzip the cover and open the valve, which could obviously be a huge problem. (The valve does require pushing in on a flap after it’s open to deflate the seat, but that wouldn’t be hard for a kid to figure out, either.) I suggested that going forward, they might want to put both components in the back to prevent that from happening. 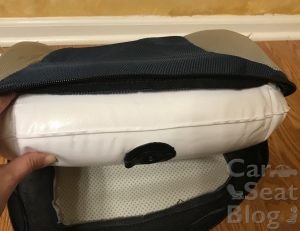 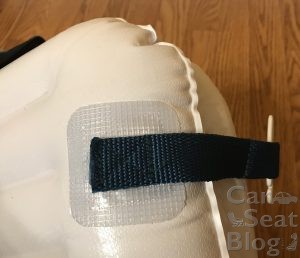 Another concern is that lap-belt guides are attached to the air bladder. The webbing actually seems to be sewn onto a flexible plastic piece that appears to be fused onto the vinyl. To my regular human strength, it feels impossible to rip off, but we all know that crash forces are far greater than regular human strength, which makes me a bit concerned that the guides could rip off in a crash. The hiccapop representative, though, said that they had not experienced any failures in crash testing. He said the guides are high-frequency bonded to the bladder, and that should actually give it more structural rigidity than having the guides attached to the cover.

When we asked about FMVSS 213 compliance, the company gave the following response:

Our booster was tested to National Highway Traffic Safety Administration Federal Motor Vehicle Safety Standard 213 Sled Test procedure Rev. 15, dated October 20, 2017. Our testing report was issued on 4/23/2018 (in the USA) by a nationally recognized and FEDERALLY approved research and safety corporation specializing in car seats, booster seats and transportation safety in general (with you being in the business…you know exactly who they are). Full dynamic tests and all inspections were conducted in accordance with 49 CFR Part 571.213 and laboratory test procedure TP-213-10. All required labeling was inspected and compared to the requirements of FMVSS No. 213 S5.3.1(b) and S5.5 as applicably determined by our testing agency. Additionally, we have met all other applicable test sections as required by law and with respect to (for example, but not limited to) Registration Forms, Installation, Dummy testing, Protrusion Limitations, etc. This all derives from a 48-page report that was furnished us and which is quite voluminous and complicated. We do not publish this because it contains proprietary information.

They also sent us portions of the report from the certified lab that ran the tests. All carseat manufacturers self-certify their seats, and from the report we were sent, the hiccapop does appear to have been successfully evaluated by one of the few major independent facilities that are approved to conduct this testing. The company is in communication with IIHS about their fit test (which tests how a booster positions the seatbelt on a dummy, but does not provide crash-performance ratings).

CarseatBlog encourages innovation and new products and this one does look promising. We hope to have a full review of the hiccapop UberBoost in the near future, once we have had time to evaluate it more extensively in daily use and it has been rated by the IIHS. Until then, we can neither recommend for or against this product compared to similar compact/travel boosters like the Bubblebum (an IIHS Best Bet booster).

Update 1/18/2019: IIHS has given the hiccapop a Best Bet rating. We will continue to evaluate the seat.