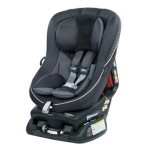 The Zeus 360 has many unique and innovate features but the most prominent is the 360 turn feature. This feature allows you to load and unload the child facing sideways (although the seat will be somewhat lopsided) and then swivel and lock the seat into either the rear or forward-facing position for travel. It’s also possible to load the child from the forward-facing position, then swivel the seat around and lock it in rear-facing – a feature that could be a saving grace for parents or caregivers with 2 door vehicles.

Check out the video of the Zeus 360 that was posted previously on CarseatBlog to see the seat in action!

The Zeus 360 comes with a lower body insert cushion (mandatory for all children under 25 lbs), 2 head support cushions (optional – can use one, double them up and use both or skip them entirely), harness strap covers (optional), a “tummy pad” which is sewn onto the cover and creates a padded shield between the child and the buckle/crotch strap and a firm but lightweight recline block to use, if necessary, to achieve the correct rear-facing recline angle in the vehicle.

Center LATCH installations with non-standard spacing are prohibited. Use lower LATCH attachments only in dedicated LATCH positions that have standardized spacing of 280 mm (11”) between the lower anchor bars.

For vehicle seat protection – Combi allows the use of a thin car seat mat, thin towel or thin blanket under and behind carseat.  Since the bottom of the base is smooth with no sharp edges or corners – this probably isn’t necessary but it’s nice to know that it’s approved since so many parents prefer to put something under their carseat, even if just to catch crumbs and small spills.

So far, I’ve installed the Zeus 360 in 3 different vehicles. In my 2005 Ford Freestar minivan, the seat installed relatively easily with LATCH in the captain’s chair. I did have to remove the vehicle head restraint on the captain’s chair otherwise it interfered with the carseat’s ability to lock into place after being rotated into the forward-facing position. I can definitely see where this might be a problem in some other vehicles with fixed, non-adjustable head restraints.

The first step in the LATCH installation process is to rotate the seat into the rear-facing position. This allows better access to the beltpath. If you’re planning to use the seat rear-facing, place the recline block under it near the vehicle seat bight. If you’re using the seat forward-facing – you can skip the recline block which will make the seat more reclined when installed, or use it to have the seat sit more upright. After threading the lower LATCH belt correctly through the beltpath channel (note: the belt webbing will roll, bunch or fold over – this is okay as per the Zeus instruction manual), attach the hooks to the lower LATCH anchors and to the top tether anchor. Next, rotate the seat to the forward-facing position to tighten the belts. The Zeus 360 instruction manual recommends that you place your knee in the seat and use your weight to compress the vehicle seat cushion while rocking from side to side to get the LATCH belt tightly adjusted. Do not attempt to route the LATCH belt through the lock-off devices.

In my Freestar, the recline block was needed to achieve an appropriate rear-facing recline angle for an older baby or toddler. However, even with the recline block, the reference line still wasn’t perfectly parallel to the ground and the seat looked a little too upright for a newborn. I wound up “beefing up” the recline block by wrapping a small thin towel around it. This made the reference line perfectly parallel to the ground and gave me a more appropriate angle for a young baby who lacks head control.

After achieving the maximum recline angle, I put a newborn-sized doll in the seat. I noticed that the infant head supports seemed to push the doll’s head forward which, in real life, could promote head slumping and possibly compromise the airway of a real newborn. I confirmed with Combi that these infant head inserts are entirely optional even though the insert for the lower body is mandatory for children under 25 lbs. Personally, for a newborn, I’d suggest removing both head inserts and using rolled-up receiving blankets to support the child’s head instead. Other than that, I thought the harness fit the 20” doll quite well with the mandatory lower body insert in place.

In our 2000 Honda Accord (with no lower LATCH anchors), I installed the seat in the outboard seating position with the lap/shoulder seatbelt. To install this seat with a lap/shoulder seatbelt – start with both lock-offs snapped shut and the seat in the rear-facing position. You can also try threading the seatbelt through the beltpath channel when the seat is in the reclined forward-facing position. Either way is acceptable – just do what you feel is easier, then buckle. The beltpath is definitely awkward and you will probably have to carefully guide both the lap and shoulder belt portions of the belt into the red channel correctly before buckling. Do not switch the retractor yet. If you have the seat rear-facing at this point, you won’t be able to open the lock-off. Hold the shoulder belt down in the beltpath and rotate the seat into the forward-facing position. Now you’ll be able to open the lock-off that you need. Put a knee into the seat, pull tightly on seatbelt where it comes out of the latchplate while rocking from side to side (make sure both portions of the seatbelt stay where they belong inside the beltpath channel), slide shoulder belt into appropriate lock-off (use only the lock-off that is on the opposite side of the seatbelt buckle), and clamp lock-off shut. Using the lock-off for lap/shoulder belt installations is mandatory. If you don’t clamp the shoulder belt inside the lock-off, it may interfere with the seat’s ability to lock into place in the forward-facing position. After the shoulder belt is clamped inside the lock-off, you may switch the retractor and lock the seatbelt if your vehicle has this feature. The seat is properly installed if it doesn’t move more than 1” from side-to-side or front-to-back when you tug on the seat near the beltpath. If the seat is installed tightly, the last step is to attach the top tether strap to the tether anchor (if one is available for that seating position) and pull it snug. Tuck the excess tether strap webbing someplace safely out of the child’s reach. Once again, you should expect that the seatbelt will be rolled or folded over inside the beltpath channel. Apparently, this is not something we should be concerned about.  (Note: the top tether strap is not attached to the top tether anchor in these pictures simply because no child was going to ride in the seat and I was being lazy.)

Honestly, the installation process with lap/shoulder belt is tedious so consider yourself warned if you’re thinking about using this seat in a vehicle or seating position that doesn’t have lower LATCH anchors. It wasn’t hard for me to get the seat installed tightly but it’s not a seat that I would choose if I needed to move seats around frequently.

Finally, there is the issue of space. Due to the design, the Zeus 360 does take up a considerable amount of room when used in the rear-facing position. However, because it sits up high on its base, it tends to “clear” the front seats in our 2000 Accord better than some other large rear-facing convertibles. There are multiple variables such as preferences for seatback recline angles and head restraint positions but just to give a ballpark indication of what someone might expect in the same or similar vehicle – with the Zeus 360 installed behind the driver’s seat, using the recline block, I was able to move the front seat into a comfortable driving position for myself. I’m only 5’4” but I do prefer to sit back as far as possible with my arms fully extended while driving. For reference, I pushed the drivers seat all the way back and attempted to count the “notches” as I moved forward until I reached a position on the seat track that wasn’t interfering with the rear-facing Zeus behind me. I did this twice and both times I counted 5 notches forward until I safely cleared the seat behind me.

2004 Hyundai Sonata – installed easily outboard with LATCH. Used recline block for rear-facing which gave an appropriate angle for an older baby/child. Driver’s seat was able to go most of the way back on track without interfering (2 notches forward from furthest position back) with the seat installed at that angle.

Since my 5 year old is too big to fit in this seat, I borrowed a friend’s child who is 3 years, 37” tall and 35 lbs. I installed the Zeus in her Sonata. Her son is technically too heavy (more than 33 lbs) and too tall (more than 36”) to use this seat in the rear-facing position. However, he did have more than 1” of shell above his head if you measured perpendicular – so if he wasn’t too heavy, one could reasonably suggest that he could still safely use this seat in the rear-facing position. (In case you’re new to all of this and wondering why the heck I’m even talking about having a 3 year old rear-facing, please check out this link  for more information on the subject)

Unfortunately, due to the low top harness slots, this child is actually too tall to use the Zeus 360 in the forward-facing position (his shoulders are above the top harness slots) despite the fact that he isn’t close to 40” tall yet.  This is where the realities of seated height vs. overall height clash. A different child with a similar 37” overall height might still fit forward-facing if that child had a shorter torso and longer legs. However, with top harness slots that only measure 14.5” (with the insert removed), the reality is that this seat will be outgrown quickly by the vast majority of kids in the forward-facing position. The Zeus 360 may actually be one of those rare convertible seats that can be outgrown forward-facing before being outgrown rear-facing for certain tall but lightweight kids.

Not a disadvantage but I have to point out an omission in the manual. The seat comes out of the box with the harness set up for a small infant. The harness straps are attached to the splitter plate using what I always refer to as “the newborn loops” which allow you to achieve a snug harness fit on a small baby. As the baby grows, you need more harness length. This necessitates removing the harness from the splitter plate in the back (pop the plastic harness shield off the back for access) and then reattaching the harness either all the way at the bottom of the webbing or in the middle loop position. Unfortunately, there is no mention of any of this in the current instruction manual. Hopefully, subsequent revised editions of the Zeus 360 manual will reflect this important information. In the mean time, Combi customer service reps should be prepared for the inevitable phone calls from frustrated parents who can’t buckle their infants in the harness anymore.

The Combi Zeus 360 is definitely a niche seat and could be very useful in certain situations. It’s also a very nice rear-facing seat as long as you don’t have a curious toddler who is likely to touch the rotation lever. The quality of the seat and its components is undeniable. Nothing about the Zeus 360 looks or feels cheap. I love the innovation and engineering that went into this design but there are numerous downsides that consumers should be aware of before making the decision to purchase this particular carseat. As always, the best advice is to “try before you buy” whenever this is possible.