Illinois has become the latest state to pass a law requiring children to ride rear-facing until they’re 2 years old.

On Friday, Governor Bruce Rauner signed HB4377, which amends Illinois’ existing child restraint law. Currently, state law requires children to ride in an appropriate child restraint until they are 8 years old. The new law will also require children to remain rear-facing until they are 2 years old unless the child weighs more than 40 pounds or is more than 40 inches tall.

The original version of the bill would have imposed a $75 fine for a first-time offense, but that language was later omitted, leaving penalties to the discretion of local authorities.

The governor’s office has confirmed that the law will go into effect January 1, 2019. 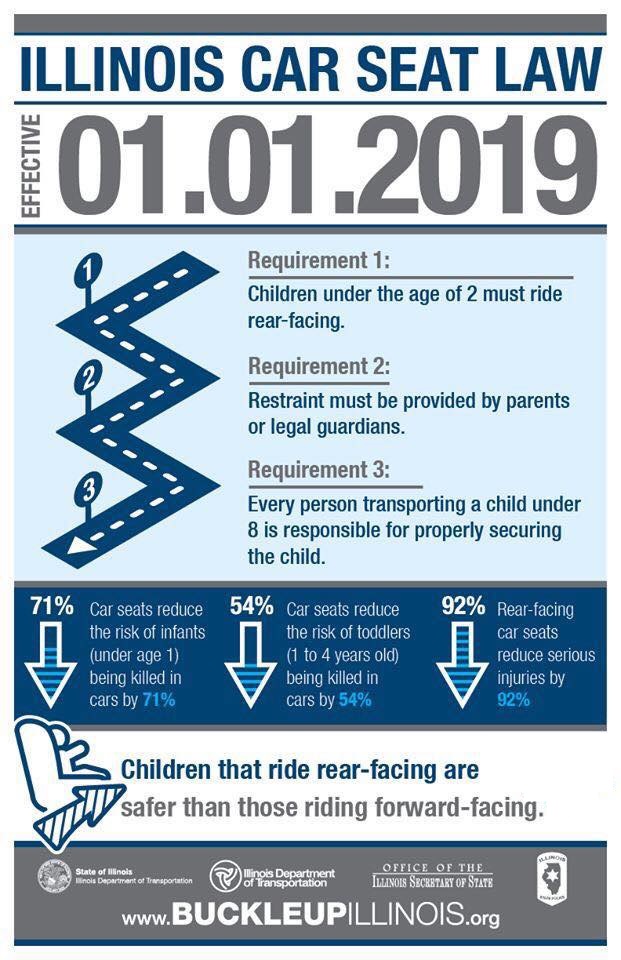 Full text of the amended child restraint law can be found here.

Section 5. The Child Passenger Protection Act is amended by changing Section 4 as follows:

Sec. 4. When any person is transporting a child in this State under the age of 8 years in a non-commercial motor vehicle of the first division, any truck or truck tractor that is equipped with seat safety belts, any other motor vehicle of the second division with a gross vehicle weight rating of 9,000 pounds or less, or a recreational vehicle on the roadways, streets or highways of this State, such person shall be responsible for providing for the protection of such child by properly securing him or her in an appropriate child restraint system. The parent or legal guardian of a child under the age of 8 years shall provide a child restraint system to any person who transports his or her child.

When any person is transporting a child in this State who is under the age of 2 years in a motor vehicle of the first division or motor vehicle of the second division weighing 9,000 pounds or less, he or she shall be responsible for properly securing the child in a rear-facing child restraint system, unless the child weighs 40 or more pounds or is 40 or more inches tall.

For purposes of this Section and Section 4b, “child restraint system” means any device which meets the standards of the United States Department of Transportation designed to restrain, seat or position children, which also includes a booster seat.