The Graco Sequel 65 is a mid-priced convertible seat with easy-to-use features such as a smooth harness adjuster and an open forward-facing belt path. It’s a tall seat—great for tall kiddos—and is similar to the Graco Extend2Fit, but doesn’t have the E2F’s higher rear-facing weight limit or leg extension tray. It’s compact front to back, which makes it a great option for tight spaces.

*We recommend following the American Academy of Pediatrics minimum guidelines of rear-facing to the limits of your child’s convertible carseat before turning them child forward-facing. 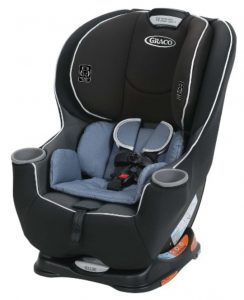 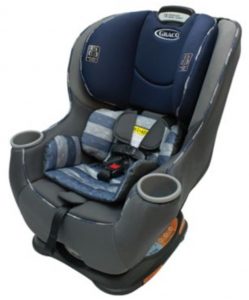 Comparing the Sequel to the Extend2Fit Convertible

Because the Sequel is based on the Extend2Fit platform, it’s only fair to compare the two. We have a chart and pictures of the two side by side. 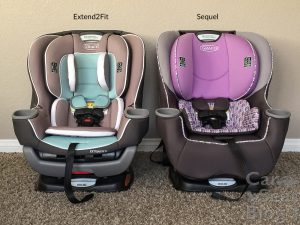 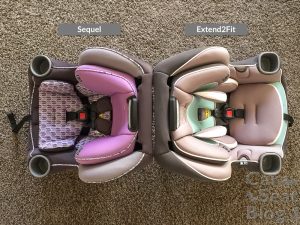 Installation for both rear- and forward-facing was easy when I installed the Sequel using the lower LATCH anchors and then when I switched to the seat belt. The only downside is that the lower LATCH connectors on the Sequel are the clip-on style, but you have to give up something in return for a lower price point and carseat weight. The LATCH connectors switch between rear- and forward-facing belt paths under the cover by sliding underneath a metal bar. 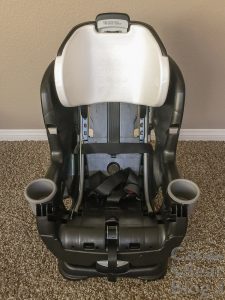 3 rear-facing recline settings: Infants 3 months and younger must have a recline that allows the ball in the recline angle indicator to be fully in the light blue circle, but after that age, you can make the recline more upright as long as the ball stays in the blue. The recline handle is on the very bottom of the seat and you pull on it to engage the mechanism. 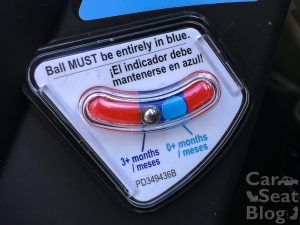 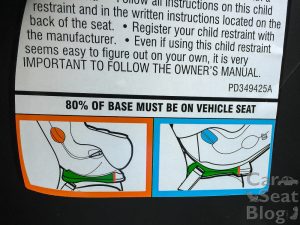 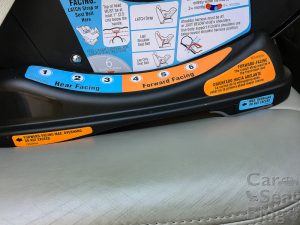 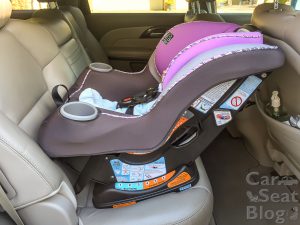 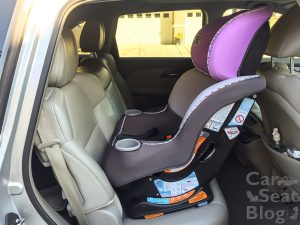 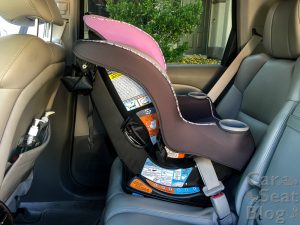 *Disclaimer: When installed rear-facing for this review, the carseat *never* touched the front seat. It looks like it did because of the angle at which I took the photos. There was at least a finger’s width between the carseat and the front passenger seat.

Unlike the Extend2Fit, there are no special rules regarding which recline to use or needing to remove harness covers. Just choose a recline you like in the orange zone, install it tightly, and attach the top tether to your vehicle’s top tether anchor. A nice feature is the opening in the cover so you can reach through and grab the seat belt or LATCH belt to pull it tight. Oh, there is one thing to remember:

Move the crotch strap to the forward position: The crotch strap has to be all the way out when forward-facing. It’s not a fancy buckle; you’ll have to turn the metal slide on the buckle and pull it out the top of the seat to remove it, then put it back down through the top of the carseat to replace it. Don’t forget to give it a tug to make sure it’s seated. 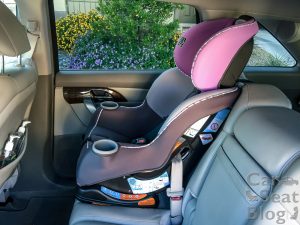 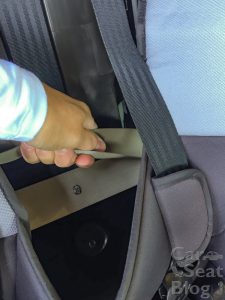 Graco allows LATCH installation in the center seating position if the vehicle manufacturer allows it and the lower LATCH anchor bars are spaced 11” apart when measured at their centers.

Like most other convertibles of its generation, the Sequel does not come with a locking clip. If your seat belts do not lock at the retractor or at the latchplate, you will need to contact Graco for a locking clip. 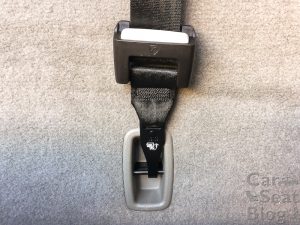 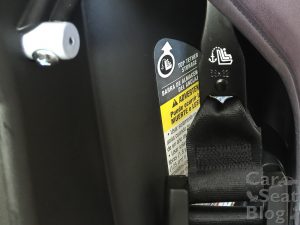 The fit for my 4 lbs. preemie doll in the Sequel 65 was poor; this is not a carseat that will work for a very small newborn. The harness was too high, there was too much space around the hips and crotch, and the buckle dug into the doll’s abdomen when properly tightened. My doll, Romeo, is about the size of an 8-9 lbs. newborn and he fits well without the body support. In the rear-facing fit section, the instruction manual specifies that the harness height must be at or below the child’s shoulders. 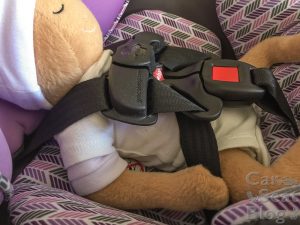 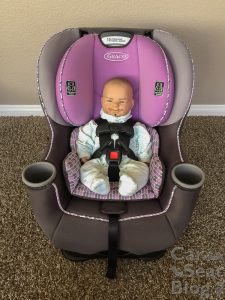 Fit on older kids was great. The headrest adjusted easily, as did the harness once the kids were in the seat. My models were easily able to buckle and adjust their own harnesses, though they’ve been taught from a young age to do so since their mom is a tech. 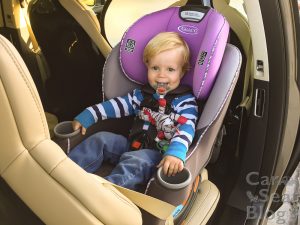 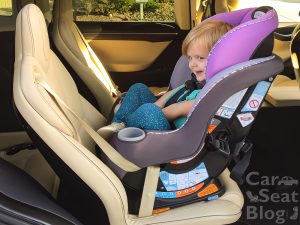 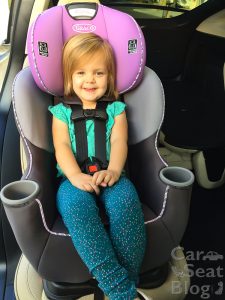 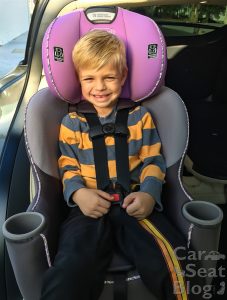 The cover that shipped on my seat was easy to remove and fairly easy to put replace. It has several elastics on the main body and a couple on the headrest to secure them in place which take some time and patience to hook on; otherwise, the cover slides on and secures with clips. For those observant folks who notice the 2 tiny elastic loops on the front of the cover where the harness comes out; they don’t hook to anything once the seat is out of the box. They’re for retail tags. 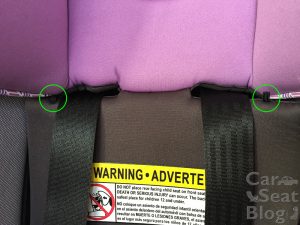 The nicely padded cover can be washed in the washing machine on cold and air-dried.

The harness is one long length, but it has a butterfly attachment in the middle under the child’s bum area, so there’s not a possibility of one side being longer than the other. It can be cleaned like any other: dip a washcloth in water and use a drop of mild soap (Dawn, Dreft) to clean it. Be sure to wipe off that soap with the wet washcloth and let the harness thoroughly dry. Set it in full sun if it still stinks.

Graco has gone to a 1-harness-slot set design on their no re-thread convertibles, which means that it will be more difficult to tighten and loosen the harness in lower “slot” positions because the headrest is pushing on it, causing friction. As your child gets older and taller, there will be less friction and it will be easier to use.

The Sequel is FAA-approved, but you will most likely need to raise the armrests on the airplane seat to get it to fit because of the cup holders.

The Sequel has a lifespan of 10 years and Graco wants you to replace it after any crash.

(In fairness, these aren’t necessarily problems but I list them here to inform potential consumers of specific Sequel 65 issues)

It’s easy to compare the Graco Sequel 65 to the Graco Extend2Fit because they are based on the same platform. They are very similar in shape and size, but the Sequel lacks the Extend2Fit’s pull out leg extension panel and upper rear-facing weight limit of 50 lbs. However, when you consider the MSRP on the Sequel is $40 less than the E2F, it definitely is worth a look if you don’t need the higher weight limit rear-facing.

Thank you to Graco for providing the Graco Sequel 65 used for this review. No other compensation was provided. All opinions expressed are those of CarseatBlog.

Leave a Reply to Dana