In 2017, 42 children have died from heatstroke after being left in hot vehicles. Differing circumstances surround the deaths, and many more unreported near-tragedies, but a warning system may have prevented many of them. It only takes 10 minutes for the temperature inside a vehicle to rise about 19 degrees and deaths have been recorded during all seasons of the year. GM already offers a Rear Seat Reminder on all new 2017 Acadia models and plans to add it to many more 2018 model year GM vehicles. Nissan also offers a Rear Door Alert that is standard equipment on the 2018 Pathfinder.

Hyundai now enters the game with its Rear Occupant Alert system, a system designed with multiple layers of warnings for the driver. Beginning in model year 2019 vehicles, Hyundai adds ultrasonic sensors to the headliner which monitor the back seat for motion. If there’s motion, a message displays, and a chime plays, on the center instrument console alerting the driver to check the back seat. Further, when the driver walks away and movement continues in the back seat, the horn honks, lights flash on the vehicle, and the driver receives a message on a cell phone app to check the vehicle. 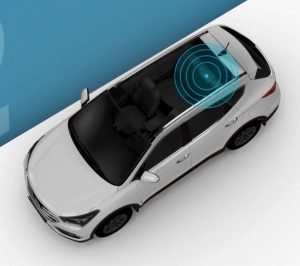 Right now, the sensors only pick up movements of an awake child. When asked, Hyundai responded that technology is in development for detecting sleeping children. The app works with the phone via Hyundai’s Blue Link system, which will also work when a parent is far away from the vehicle.

The system can also be deactivated, which benefits people who don’t have children, but it can also be deactivated by parents who find the system annoying. One auto trade group pointed out that new parents tend not to buy new model vehicles, so these systems won’t be used by the very groups who need them most. However, over time, these notification systems will be on vehicles used by parents who purchase them as previously owned vehicles.