Home
Matt
A True Athlete in My Presence
Tweet Pin It 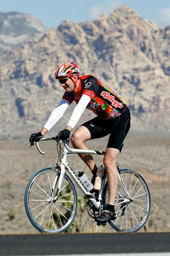 Since you’ve been introduced to Matt, I thought I’d share something he did two weeks ago that I think is really cool.  No, it’s not car seat related—though if he was able to uninstall the Sunshine Kids Monterey from his SUV without calling me first or install the Britax Frontier using the long belt path, well, that’d be pretty spectacular.  He made two separate bike rides of 103 miles on October 18th and 119 miles on the 25th.

Every year in October, there’s what organizers call a “Century Bike Ride” that’s about 100 miles (there are also shorter distances of 50, 20, and 10 miles usually).  All the local riders enjoy it and spend the year gearing up for it.  This year, though, it was cancelled for some reason much to everyone’s dismay.  A town a couple of hours north picked up the slack and planned their own century ride for the 18th and all the die-hards headed up there.  My dh rode the 50 miles here last year, but was insistent on riding the 100 miles this year.  He trained with my friend, Jim, a baby store owner and fellow tech, who we didn’t know was a rider until his wife mentioned it to me one day earlier this year.  The summer was broilingly hot and the wind was always blowing in their faces as they trained.

Right as they were getting ready to sign up for the 100 mile ride up north (which is never 100 miles, it’s always more, lol), the folks here in town got around to putting on their regular ride at the last minute.  Well, of course, dh and his friends couldn’t pass it up!  Not when it’s in their own backyard!

The 18th came and the guys—my dh, Jim, and my dh’s friend from work, Todd—rode the route and were strong.  The training paid off!  Dh texted me as they stopped for breaks to let me know his mileage.  They still had enough stamina to drive the 2 hours home after the ride, though dh did just lay in bed the rest of the evening, lol!

The 25th came and the same guys got up earlier (5a—ouch!) because the ride started earlier.  Dh texted me mid-morning and said he was tired.  Uh oh, too early to be tired when you have 60 miles left to go.  The route had him going less than a ½ mile from our house, so we went out to cheer them on.  Jim and Todd came up the hill strong, but dh looked awful.  I thought for sure he was just going to come home right then and there (or be sick 😮 ).  But nope, after 5 minutes, they continued on.  Two hours later, we were out there again to cheer dh on as he rode the final stretch back—downhill all the way 🙂 .  He did it!  119 miles a week after riding 103 miles.  Very impressive!

He hasn’t been on his bike since.