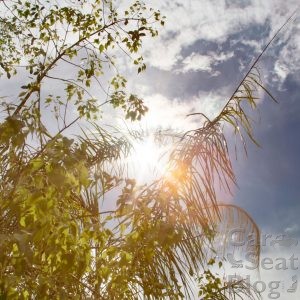 I remember the good ol’ days when my neighbor friends and I would climb into their old truck in their driveway and pretend to drive to faraway lands. We would each take turns “driving” the old stick shift and using our imagination, pointing out landmarks and making tire squealing noises as we yanked on the steering wheel. I think back and wonder how I’m alive today; that truck could have easily slipped into neutral and we would have rolled into the street or over one of us as we played or did one of our other insane things (I did not partake in jumping from my roof into the pool, but my friends, on the other hand . . .). But even in the good ol’ days, kids were dying in hot vehicles, just as they are now. They’re dying on a weekly basis now, sometimes daily, and we need to change this.

People who live in hot climates know this isn’t a modern phenomena, though with the advent of social media where news travels at lightning speed, hot vehicle deaths become known about within moments. Rear-facing carseats also have contributed to an increase in these deaths, though kids have fallen asleep in cars since there have been cars, so it’s hard to place the sole blame there. The old “out of sight, out of mind” adage is often mentioned with rear-facing seats, but it’s much more than that. 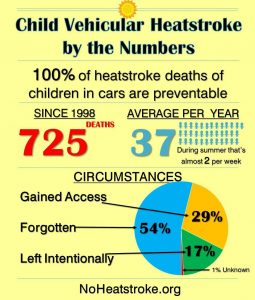 We know the human brain is fallible; it forgets things, especially when there’s a change in its routine. The brain likes to fly on autopilot. Think about what you grab before getting in your car: your keys, cellphone, and wallet. One day you also want to take a bottle of water, but your wallet is on the kitchen counter instead of next to the door with your keys and water. You’re still taking 3 things with you, right? You take the keys, water, and cellphone because your brain expects you to take 3 items. You get to your destination and realize you don’t have your wallet. Or maybe the time you left a drink on top of your car because your hands were full and you needed to unload items into your back seat? Recognizing this is the first step in taking away the “It can never happen to me” mentality because guess what? That’s what the parents who forgot about their kids thought too. And before you cast stones on parents who do accidentally leave their kids in cars and proclaim, “I’d *never* forget *my* child in a car,” read this article. It’s so important, I’ve linked it twice in the same paragraph.

We also need to dispel this idea that the vehicle is a babysitter. This is NOT proper parenting practice and needs to STOP. Do NOT leave your child in the car without supervision while you run into the store/bank/cleaners/hair salon. Just don’t. This is 2017 not 1977 and we know better now. I’m going to judge you on this one. And call the cops. We’ve had too many instances of kids who can’t open their carseat buckles bake to death in their carseats, who can’t open car doors because they’re locked, who are stuck in stolen vehicles—I can go on.

Vehicles are tools to get us from one place to another. We wouldn’t let our kids play with a power tool, right? When our vehicles are parked, they should be locked and the keys put in a place where kids can’t access them so they don’t accidentally get stuck in them (otherwise known as vehicle entrapment). Think like your child for a moment: perhaps they left a crayon or marker in the car and want to go get it. So they go to the car, climb in and locate the item. But the child locks are on and they can’t open the door—they’re stuck in the back seat now! Panic sets in and it’s hot because the car’s been in the sun or hot garage. Maybe there’s stuff on the center front console and your child sees it as too big a wall to climb over. Since a child’s body heats up 5 times more quickly than an adult’s, their thinking can be foggy very quickly and they can become overheated in minutes. If you can’t find your child, check bodies of water first (including neighbors’ pools and ponds), then check your vehicle thoroughly.

Don’t forget to ask your childcare provider to follow up with you immediately if you don’t drop your child off at your prearranged time. With our technology now, it takes only a minute to send out a text blast at even the largest daycares. Even an hour can make a difference, so it’s important to confirm drop off times quickly. 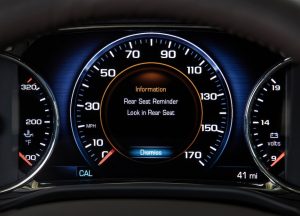 What about alarms? Evenflo has the SensorSafe Technology™ on certain carseats (we previewed the Embrace DLX with SensorSafe here) that chimes when the 2008 or later vehicle is turned off (or when the chest clip is opened while the vehicle is in motion). GM offers a Rear Seat Reminder on all new 2017 Acadia models and will be expanding it to more Buick, Cadillac, Chevrolet, and other GMC models for 2018 models. A smart pre-teen from Texas created an alarm that blows a fan after a neighbor’s 6 month old died in a hot car. Can we rely on alarms? Do they give us a false sense of security or will we eventually succumb to warning fatigue? The thing about humans is that we’re lazy and unless we’re highly motivated, we’re going to start to ignore the sounds and reminders, especially if they’re . . . routine.

I’d like to see mainstream media take these vehicle heatstroke deaths and make half as big a deal out of them as they do most news stories. Having been in a grassroots organization for years trying to get media coverage for child passenger safety, it’s frustrating not to have this topic taken seriously. Word of mouth only goes so far in getting the message out. But of course, there are still a lot of people out there who don’t think keeping children safe in and around vehicles should be a priority so it’s not surprising this topic doesn’t rank higher in the news cycle. I wonder how many kids have to die until it does?

Infographic provided by noheatstroke.org, run by meteorologist Jan Null. He keeps this website up-to-date with the sad statistics and other scientific data regarding hot vehicles.