By now, most everyone knows about the total solar eclipse in a few weeks on August 21st that passes from coast to coast in the USA. Unfortunately, it’s only a VERY narrow path across the nation that will see up to 2 minutes and 40 seconds of total eclipse. ONLY people in this narrow band during the short time window when the moon completely blocks the sun may look at a total eclipse with their eyes directly, and it is an awesome sight!  For many, this may be a once in a lifetime opportunity, so please be ready to view it safely.

So, if you are not lucky enough to be in the total eclipse path, how do you safely allow your kids and family to view it? There are a few ways, but perhaps the most popular is to use paper “eclipse glasses”. These resemble the old style paper 3D glasses used in theaters or TV broadcasts, but the solar glasses have lenses so dark that you can’t see anything through them except for direct observation of the sun.  If you solar observation or eclipse glasses from a reputable manufacturer who has certified and tested them to the correct standards, you can use them for a partial eclipse or even to look at the full sun any time.  Even if you are in the total eclipse path, these glasses are still handy to watch the event before and after the total eclipse phase, when the moon only partially blocks the sun.  Caution: Even the darkest sunglasses will not protect your eyes from damage, use only products certified for direct solar viewing.

Buyers beware! Like some untested and un-certified carseats that we helped expose on Amazon, sold directly by dubious sellers in China or Asia, there are also questionable eclipse glasses. They might claim to be certified, but do you trust them for your family? I wouldn’t! So, if you are buying some inexpensive paper eclipse glasses, stick with well-known and reputable brands. These include Celestron, Meade, Eclipse Shades by Rainbow Symphony and American Paper Optics. These brands have not only been around a long time, but print all the necessary certification and testing information on the glasses, along with their company name and address and other information.  Update: Counterfeits of these trusted brands also exist:

Then there are the knockoffs. These might claim to have an ISO and/or CE certification, but often don’t list any company name or testing information at all. Maybe they are safe. Maybe not. Why take a risk? For example, these were mixed into a pack of 10 that I bought on Amazon for $6 and they are definitely questionable.  One lists a certification number and logo, but no company or testing  information is present anywhere on the glasses.  The other has some helpful information, but no ISO standard and no company or testing information: 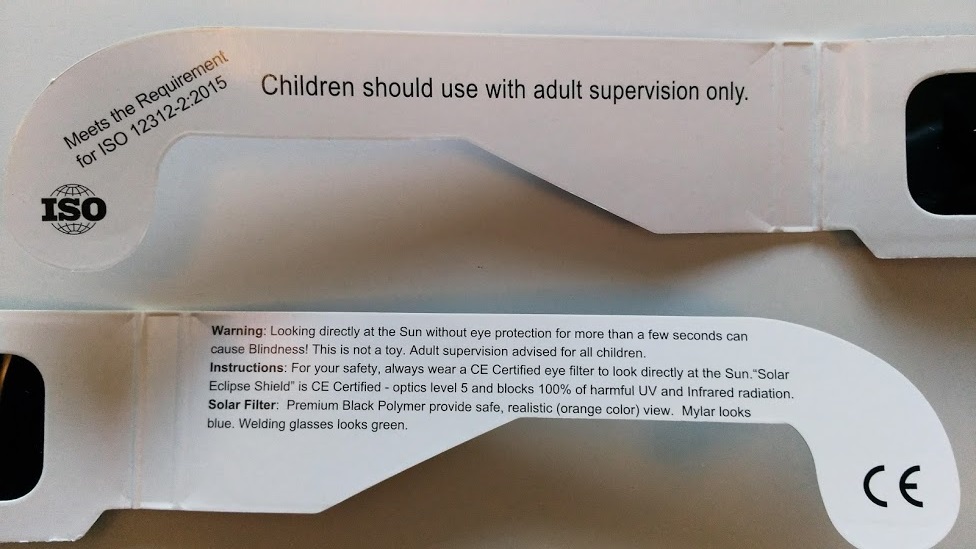 Direct viewing  through paper eclipse glasses will give you an image the same size as a full moon at night.  You should NEVER use any magnification in conjunction with paper eclipse glasses or other filters not specifically designed and approved for telescopes, binoculars or other zoom lenses.  Celestron makes some 2x magnifcation paper binoculars that will give you a slightly larger image, if you can still find some.  They also make solar filters for many of their telescopes.  I have a different style from another astronomical filter company on my scope- 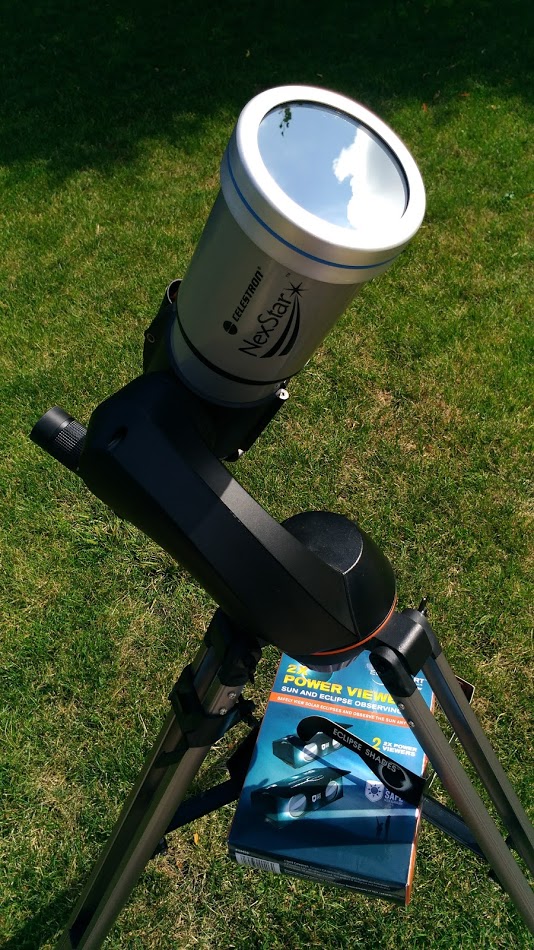 There are other ways to view the eclipse, such as indirect viewing with classic pinhole “cameras”.  NASA has some tips on eclipse safety.  More information can be found through the American Astronomical Society.  The last eclipse visible in the continental USA was in 1979.  The next one will be in 2024, and after that in 2045.  If you are lucky enough to travel to the total eclipse path and have good weather, I can offer one important piece of advice.  This is a relatively short total eclipse, so DON’T spend more than a few moments using your phone or camera.  Take in the awe of the total eclipse directly with your eyes (or safely with a telescope or binoculars) for as long as you can.  I spent too much time grabbing video the first time and won’t make that mistake again!

And please, don’t believe the fear mongers* and stay indoors!  There ARE safe ways to view the partial eclipse that will cover the entire continental USA and most of Canada.  If you are anywhere close to the total eclipse zone and can make the trip, do so!   There is NOTHING like viewing the result of the amazing astronomical coincidence (or divine intervention if you prefer) that made the relative sizes of the sun and moon to appear to be the same from the Earth’s surface when a total eclipse occurs.   Having seen partial eclipses as well as a total eclipse almost 20 years ago, I can attest beyond a doubt that even a 90% coverage zone has absolutely none of the awe of being in the total eclipse path.  I wish you safe travel and clear skies on August 21st, 2017!

*Some uninformed governmental and even medical agencies have advised people to stay indoors during an eclipse.  In some Latin American cultures, being outdoors during an eclipse while pregnant is said to cause various maladies to the unborn baby, from birth defects to demonic possession.  While I’m not 100% certain about the demonic possession claim, I can attest that our oldest son suffered no ill health effects from being exposed in the Caribbean eclipse before he was born in 1998…  In fact, just a few days after this year’s eclipse, he’s leaving for college to study Physics, perhaps Astrophysics, after earning straight-As in high school and a 36 ACT score, so don’t believe the myths!