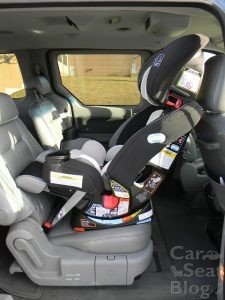 One of our most popular blogs is the Rear-Facing Space Comparison where we rate convertible seats based on the amount of room they take up in my vehicle compared with other seats in the group.

I was eager to add the new Graco 4Ever Extend2Fit to the comparison but I knew this was going to be more work than usual based on the many rear-facing installation options you have with this particular seat. This seat has 4 recline positions on the base that can be used to achieve an acceptable rear-facing recline position as per the angle indicator. The angle indicator is a liquid bubble level that has to be in the range of the blue line shown on the window. 4Ever Extend2Fit also has Graco’s unique 4-position legrest extension feature (truthfully there are 3 extension positions, the first position is fully retracted) AND the coveted 50 pound rear-facing weight limit. 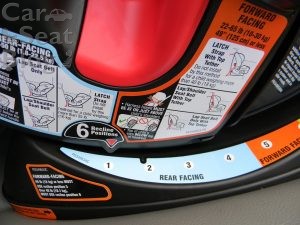 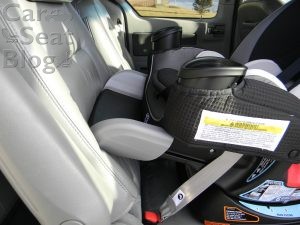 I summarized my findings in the space comparison ratings but I wanted to supplement that information with the full scope of my conclusions here.

I started with the 4Ever Extend2Fit in base position #1 (most reclined), no legrest extension, head rest flush with shell. This is how the seat would be installed for a newborn or younger baby. I gained 3.5″ of room (based on the worst performing seat in the peer group). This measurement translates into a “B” rating in the comparison. 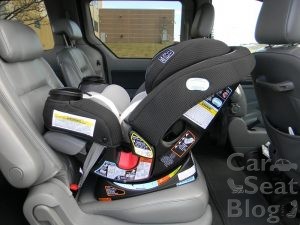 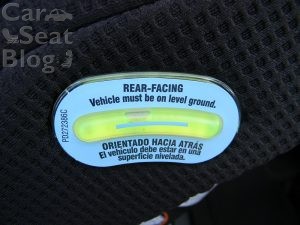 Base position #2 (more upright), no legrest extension, head rest flush with shell. This is how the seat might be installed for an older baby who has good head and neck control and can tolerate being seated in a more upright position. In this position I gained 4″ of room. This is a B+ rating in the comparison. 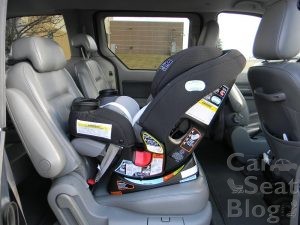 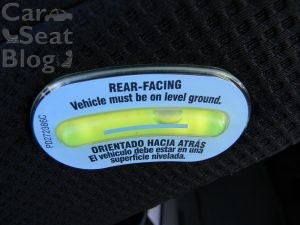 Base position #3 (very upright), no legrest extension, head rest fully extended. In this position the bubble level was outside of the acceptable range for rear-facing. This was NOT an acceptable installation as per the angle indicator so I’m not counting it. However, for those who are curious, it only gave me an extra half inch of room beyond what I got with the base in position #2. My measurement with the seat in this position was +4.5″ of space. 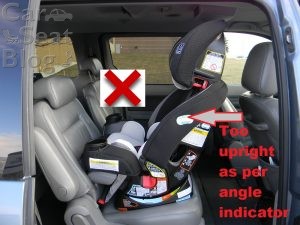 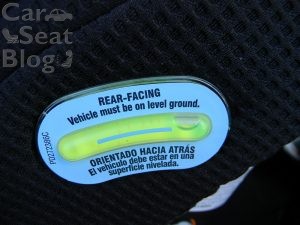 At this point, it seemed likely to me that you would only be able to use 2 of the 4 base positions in any particular vehicle to achieve an acceptable recline angle in the range allowed. But as I found out when I started to install using the legrest extension, the recline angle can change when you start to use this feature. More on that in a little while.

I went back to base position #2, extended the legrest 1 notch, head rest is still fully extended. Because I’m using the legrest extension now, I’m starting to lose space. Now I have +3.5″ (which is what I had with the seat fully reclined reclined in position #1 and no legrest extension). Again, this rates a “B” in the comparison. 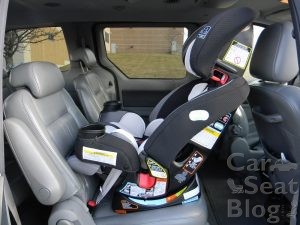 Here we are in the same #2 base position, with the legrest fully extended and the head rest fully extended. As you can see, it’s taking up a LOT of space now. At this point I’m measuring a gain of only 1″ (based on the biggest space hogs in the peer group). In the comparison, this is a C- rating.

However, I was surprised to see the bubble level indicator in the middle of the blue line range now. When I installed using the same #2 base position without using the legrest extension, the bubble was much closer to the end of the allowable range. This made me wonder if I could get an acceptable installation using recline position #3 on the base with the legrest panel fully extended… 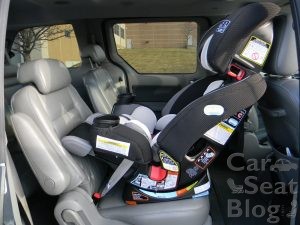 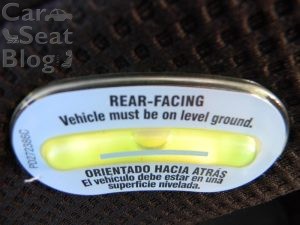 Final installation: Base position #3, legrest fully extended, head rest fully extended.  The liquid bubble is on the most upright end of acceptable range but it is within the range. I picked up a extra half inch of space with the base in position #3. The measurement is now +1.5″ which is a little better but still rates a C- in the comparison. 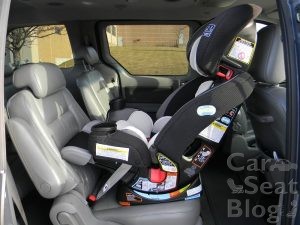 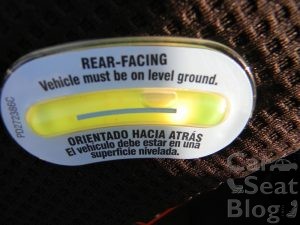 The other thing to keep your eye on when using the legrest extension feature is the amount of overhang allowed. When you start extending the legrest panel you increase the space between carseat and the vehicle seat and that positions the base closer to the edge of the vehicle seat cushion. Thankfully, Graco put a little blue sticker label on the edge of the base to show what the acceptable amount of overhang is. Overhang past that blue line is NOT acceptable. Too much overhang could be an issue in backseats with shallow cushions (e.g., Jeep Wranglers, some compact cars, extended cab pickup trucks, etc.). Luckily, you don’t have to use the legrest extension so you can just ignore that option if overhang becomes an issue. 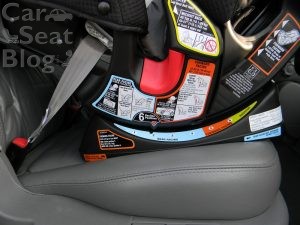 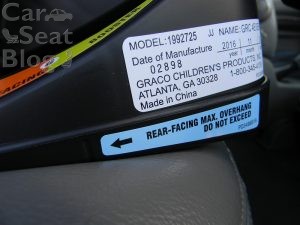 The Graco 4Ever Extend2Fit is a versatile 4-in-1 product with a 50 lbs. rear-facing weight limit and a very unique legrest extension feature. You may use base positions 1, 2, 3 or 4 to achieve an appropriate RF recline angle as per the angle indicator but don’t expect that all 4 positions will yield an appropriate recline position in your vehicle. You may use any of the legrest panel positions rear-facing without restriction. The only rules are: make sure your recline angle is in the allowable range and make sure you don’t have too much overhang of the base.

Having so many rear-facing installation options creates more potential for finding a suitable recline angle, giving your child some extra legroom and taking up less space in your vehicle. However, the reality is that once you start using the legrest extension feature, the seat definitely takes up more front-to-back space in the vehicle. I lost 2-3″ of space in my vehicle when I extended the legrest fully and that was using the more upright #2 & #3 recline positions. The seat would have taken up even more room if I had extended the legrest in the most reclined position.

Parents who are taller than average and/or driving vehicles with limited legroom in the backseat may find that they aren’t able to take advantage of the legrest extension feature without seriously compromising the space upfront for the driver or passenger. I found it interesting that in my vehicle the less expensive Graco Extend2Fit convertible actually takes up slightly less space without the legrest extension than the 4Ever Extend2Fit model. With the legrest fully extended, both seats had the same +1.5″ measurement. 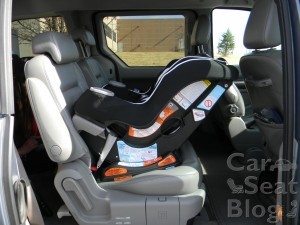 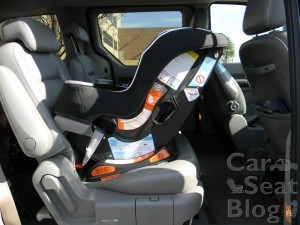 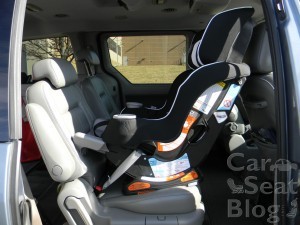 If front-to-back space is a big issue in your vehicle, and you don’t think that you will ever be able to take advantage of the legrest extension, then you might be better off with a different convertible seat since it doesn’t make sense to pay for a feature you won’t ever use. The original Graco 4Ever All-in-One, Graco Milestone All-in-One, Graco MySize 65 convertible & Graco Contender 65 convertible are all options that did better than average in our Rear-Facing Space Comparison but don’t have the Extend2Fit legrest feature.