People don’t often think of pickup trucks as “family vehicles,” but there’s a lot to be said for them if you look for the right features. There’s a wide range of trucks out there, from those with no back seat (standard cab), to those with an unusable back seat (many extended cabs), to those with back seats so large you could camp in them. The former might be tough to use with kids, but the latter can be great, allowing you to safely haul your kids and have plenty of room for cargo and/or horsepower for towing.

I recently had the opportunity to drive a 2016/2017 GMC Sierra 1500 4WD Crew Cab SLT for a week, and I could easily see it being someone’s family car.

We’ll get to the carseat stuff in a minute, but first let’s explore the Sierra’s features and what it’s like to drive it.

The Sierra gets a 5-star overall rating in the government crash tests. That includes 5-star ratings for driver and passenger frontal crash, driver and passenger side crash, and a 4-star rating for rollovers. It receives ratings of Good in most IIHS categories, with the exception of the small overlap test (Moderate), headlights (Acceptable), and LATCH ease of use (Poor—we’ll get to this later). Regarding the headlight category, only one large pickup rated better than the Sierra—the other trucks all got marginal or poor ratings. 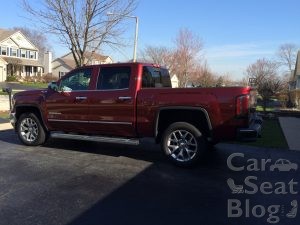 The Sierra comes with the safety features one would expect: Antilock breaks, a full range of airbags, a tire pressure monitoring system, etc. The model I drove had some extra safety features, including a forward collision alert system, parking assist, and a lane departure assist system.

The lane departure feature was really neat. I’ve driven a lot of cars that alert you when you’re drifting out of a lane, but this takes it one step further. If the vehicle detects that you’re leaving a lane (while not actively steering and with no turn signal on), it gently turns the steering wheel on its own to keep you in the lane. This is a very subtle process, and I had to test it several times to fully understand what it was doing, but it really did help keep the truck where it was supposed to be, in large part because the steering wheel moving on its own definitely grabs your attention.

I’m the first to admit that I’m not a “big car” person. The bigger the vehicle, the more I worry I’m going to run into something, especially when parking it. It’s the kind of fear that subsides over time, but I was still a bit nervous in the mere week I drove the Sierra. That said, I didn’t run into anything, nor did I have any trouble driving or maneuvering the truck.

Many pickup trucks, especially at higher trim levels, can look and feel like luxury cars inside, and that’s true of the Sierra, too. But make no mistake: It’s a pickup truck, and it feels like one when driving. It took a good depression on the gas pedal to get it going, and the acceleration took a while. That’s probably not surprising, but I drove the Sierra right after testing out the 2016 Subaru Forester, which accelerates like mad with just a feather’s touch, so it seemed like a big contrast. The ride was a bit bumpier than what you’d experience in a typical sedan, but again, that comes with the territory. Overall it was actually smoother than I expected it to be.

The Sierra definitely felt sturdy, and once I got used to the way it drove it was pretty fun, even for someone who gets nervous with big vehicles. I even parked it somewhat decently! (I’ve written about my parking woes in the past.) 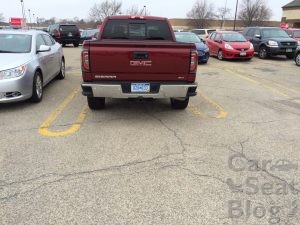 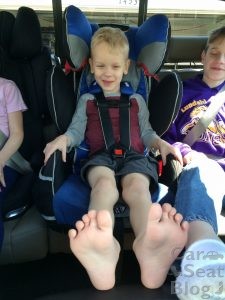 If you’re reading this review of the Sierra instead of (or in addition to) one on Edmunds, et. al., it’s probably because you have children and want to know how the Sierra Crew Cab stacks up in that regard.

I’m pleased to tell you: really well. Overall, the Sierra Crew Cab is carseat-friendly. The back seat is extremely wide, so fitting three passengers back there—even three passengers in car seats—should be very doable. I’d wager that three of almost any seat should fit back there, not just the slimmest.

In addition, the back-to-front room is extensive in the second row, meaning that rear-facing seats should usually fit just fine without the front passengers needing to have their knees in the dashboard.

Here’s a short video that goes over some of the features of the back seat and how they relate to hauling kids:

So how did the Sierra do in action? Here is a combination of a Cybex Solution Q-Fix booster, a Recaro Performance Sport, and a Britax Boulevard ClickTight, none of which are particularly narrow seats: 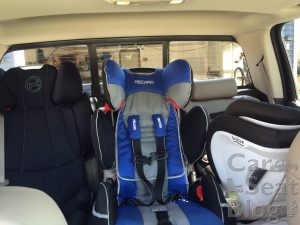 Next, a clek fllo, a Diono Pacifica, and a gb Asana: 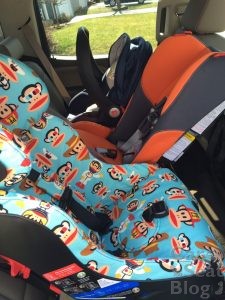 The same combination, but a Graco Nautilus instead of the Asana: 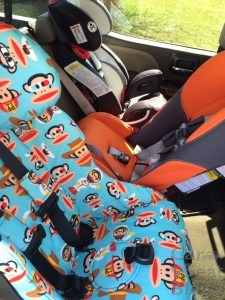 And my three kids, in the Q-Fix, Performance Sport, and just the seatbelt: 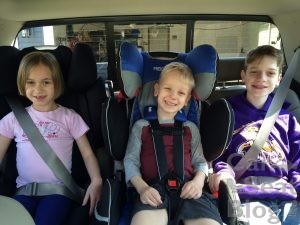 There are a few caveats, though.

In the back seat, the center position is shallower than the outboard seats. That might or might not be an issue depending on what you want to put there, since most car seats require at least 80% of the base to be on the vehicle seat, and some don’t allow any overhang.

You can see that a Diono convertible fit beautifully, with just a bit of room to spare, but a longer seat might not work, depending on how much overhang there is and what the seat allows. 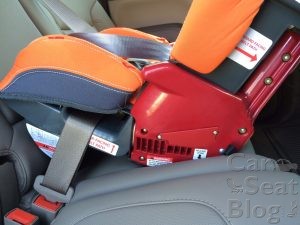 The headrests are adjustable but not removable unless you take it to a dealership. That might cause interference or incompatibilities with some seats. I didn’t find it to be a problem with the seats I tested, but it’s something to keep in mind.

Pickup trucks tend to have weird tether anchors, just by the nature of the vehicle. In the case of the Sierra, there are loops behind each seat. To attach the tether, you route it through the loop immediately behind the seat, then attach it to an adjacent loop. (It’s okay for the center loop to have both outboard tethers attached to it.) There’s very little space between headrest and window so it might be difficult (though likely not impossible) to route chunkier tether hardware through the loops. 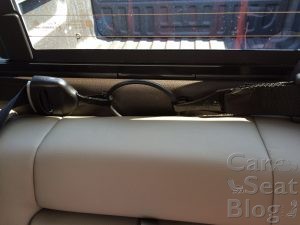 Also, there’s specific routing if you’re attaching a tether for a carseat on the driver’s side. In that case, the tether goes through the loop behind the seat, then under the center seatbelt before attaching to the loop in the center position. 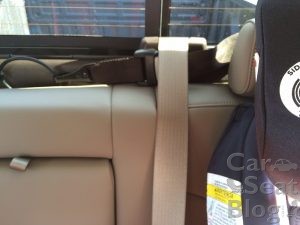 The back seat also has semi-fixed seatbelt buckles that could potentially cause some issues when installing certain seats. The driver’s side buckle is especially odd, since it’s non-flexible and comes out of the seat above the bight and at a sort-of weird angle. I didn’t have much trouble in general, but on the gb Asana base, the angle of that driver’s-side buckle caused the belt to sit back farther than usual in the beltpath. 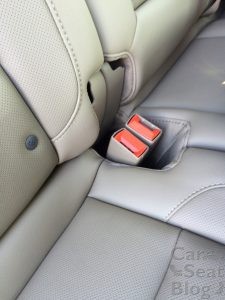 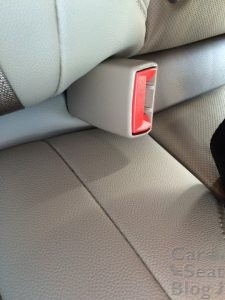 The seatbelts also have a sewn-on loop to keep the latchplate from sliding down. If your carseat has a lockoff, that loop might interfere with it, depending on where the loop falls and where the lockoff is located. I needed to loosen the belt a bit to get it to work with the lockoff on the Asana (making sure the seat was still tightly installed, of course). 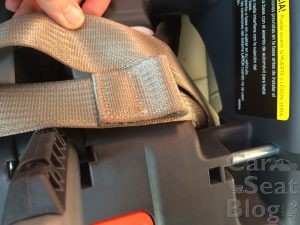 The lower anchors are harder to access than in some other vehicles, due to their placement within the leather upholstery. (That probably explains the IIHS’s rating of “poor” for the lower anchors.) I really needed to wriggle around in there to get the connectors to attach. The anchors are also located above the seat bight, which might cause some issues, although I didn’t have any. I was a little concerned I’d have trouble with the rigid anchors on the Cybex Solution Q-Fix but it worked thanks to the anchors’ ability to swivel. 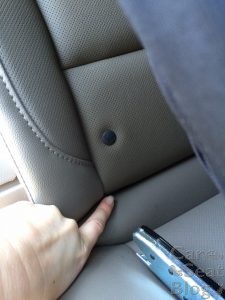 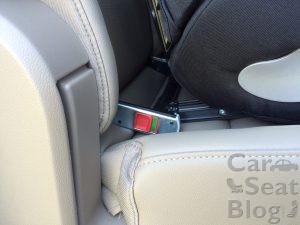 Another issue I encountered was the way the shoulder belt fit on my 7-year-old in a backless Graco TurboBooster. You can see it doesn’t make contact with her shoulder and crosses too close to her neck. 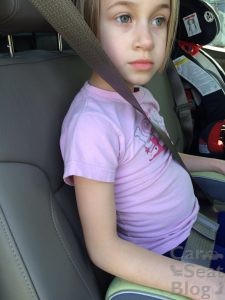 Although she’s on the small side and doesn’t normally ride in a backless booster, she does on occasion for short trips. She wanted to take the truck to school one morning, but I couldn’t allow it based on the shoulder belt. Putting her into a highback booster fixed the problem and allowed the seatbelt to fit nicely, though. (This is a good reminder that you should check the way the belt fits on boostered kids in any new vehicle or seating position they ride in.)

The loaded model I drove had lots of nice features: leather power seats, heated front seats and steering wheel, sunroof, huge navigation display, gigantic center console… It was the kind of vehicle I was

happy to spend time in.
My husband and I aren’t particularly tall, but I think even the tallest people would be comfortable given the ample seating room available.

With three kids, there’s not a lot of room to haul things inside the cab. The truck bed, however, is enormous. Putting a shell over the bed would easily give you tons and tons of “indoor” storage space for strollers, groceries, etc.

The center console for the front seat has enough depth and compartments to store a lot of stuff, and it has enough outlets and USB ports to charge the whole family’s devices. There’s also a small console available to the rear passengers, with some storage space and a 12-volt outlet. 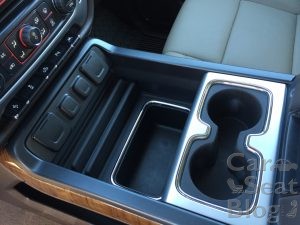 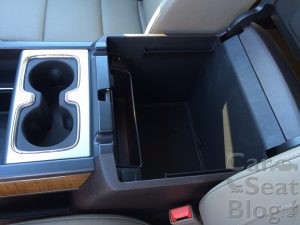 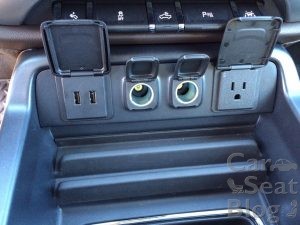 I’m not currently in the market for a pickup truck, but if I were, the GMC Sierra 1500 4WD Crew Cab SLT would be on my list. It has a ton of room inside for toting small items, and the large bed is great for hauling large ones. The wide and deep back seat should accommodate almost any combination of rear passengers, including three carseats. People who are considering large SUVs might want to take a look at the Sierra to see if it would fit their needs, too.

The SLT model I drove has a sticker price of $55,050, but the Sierra 1500 Crew Cab starts around $38,000 for the SLE trim. There is also a more expensive Denali trim. The Sierra is a nearly identical twin to the Chevrolet Silverado, so most of this review should apply to those models also.

Thank you to GMC for providing the Sierra for our review. All opinions are my own, and neither I nor CarseatBlog received any compensation.