On the eve of baby safety month, one of the big names in car seats has one again raised the bar for child passenger safety.

Britax, who has long been known and trusted by parents for their high quality car seats, is releasing new Advocate and Boulevard Clicktight convertible seats, now with an Anti-Rebound Bar (ARB) for rear facing children. The Anti-Rebound Bar is a steel bar with external padding that attaches to the end of the seat nearest the child’s feet to help improve performance in a crash. 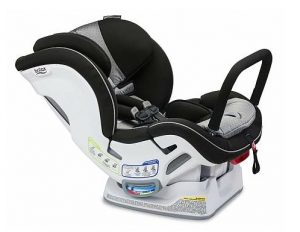 When a rear facing car seat is in a crash, it will often first move backwards, that is, towards the front of the vehicle, and then rebound back toward the seat it is installed in. For years companies have been trying to find a way to manage that rebound motion and for a while, it seemed that rear facing tethering was the direction companies were moving. But as vehicle incompatibility has become an issue, companies have had to look in other directions. It seems that the ARB is the up and coming strategy to manage this rebound motion.

Britax released a statement this week reporting that during testing, using both US Federal Motor Vehicle Safety Standards (FMVSS) and Canadian Motor Vehicle Safety Standards (CMVSS), the ARB was found to reduce the rebound rotation when rear facing in a crash by 40%, potentially providing a huge safety benefit to rear facing children. The ARB also improved stability to the car seat in frontal, rear-end and side-impact crashes. Since many parents express apprehensive about big kids rear facing in rear-end collisions, this news should also help allay some of those fears. 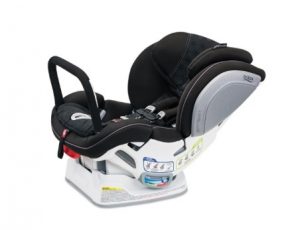 The Anti-Rebound Bar is currently being sold as an accessory for $39.99 for all ClickTight convertibles, but it will be available in select Advocate Clicktight ARB ($469.99) and Boulevard ClickTight ARB ($409.99) models starting in early September 2016. In store retailers will carry the Boulevard Clicktight ARB in the Solstice fashion (gray/black- the top picture), where online retailers will carry the ARB versions in the Circa fashion (black- the bottom picture). Look for a full review in the coming weeks, just as soon as we’ve had a chance to try out the Advocate and/or Boulevard ClickTight with Anti-Rebound Bar ourselves. 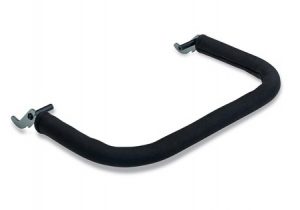 For more information about Britax, visit us.britax.com and watch for a variety of activities during child passenger safety week, September 18-24.