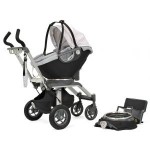 Recently Consumer Reports (CR) has claimed that they’ve identified a possible safety risk in models of the Orbit Baby infant carseat.  Here at CarseatBlog.com we always take news like this very seriously even if we’ve been generally skeptical about previous CR findings and ratings.  CR labeled the Orbit Carseat a “Don’t Buy: Safety Risk” after the infant carrier supposedly detached from its base in two of six CR-commissioned crash tests preformed at an outside laboratory.  So, should we sound the alarm?

Well, first let’s closely examine what we know about the situation.  CR claims they crash tested 6 of these carseats at an independent lab and in two of the tests (one had the seat installed with LATCH, the other was installed with a lap/shoulder seatbelt) the carrier detached from the base.  Orbit baby responded by firmly standing behind their product.  They claim that their own safety compliance testing contradicts the CR test results. “Our tests are conducted in the exact same lab that Consumer Reports and NHTSA (the National Highway Traffic Safety Administration) uses. In all of our compliance tests, we have never seen the failures that Consumer Reports has reported. Since safety is of top priority to us, we immediately ran more tests as soon as we learned about Consumer Reports’ results. We ran multiple tests in the same laboratory that Consumer Reports used, with various testing criteria, including the exact criteria Consumer Reports used. All of these tests passed. We also receive reports of real-life accidents from Orbit Baby parents, and we have never had a report of a separation or injury with an Orbit Baby car seat.”

Orbit Baby is also disputing the test results based on information they received from CR regarding the installation of their product in the tests.  Orbit Baby claims, and CR acknowledges, that the seats were installed without the use of the “StrongArm” mechanism whose function is to properly and sufficiently attach the base to the vehicle.  CR states that “Lab personnel installed the Orbit bases in our tests to meet the one inch condition and within the belt-tension range of the standard without needing to use the StrongArm mechanism.”

Honestly, I have to wonder about “lab personnel” who don’t follow the manufacturer’s specific instructions on proper installation of the child restraint. “…without needing to use the StrongArm mechanism” means someone thought the rules didn’t apply to them. Obviously, they were super confident that their way was just as good or better.  This is never a good sign.

As a CPS Technician-Instructor myself, I find it disturbing to hear that any infant child restraint detached from its base under testing conditions. However, I find it even more disturbing that the “lab personnel” or CPS Tech(s) on staff at CU are disregarding the manufacturer’s instructions when installing seats for testing purposes. And when CU stands behind the results even after admitting that the installation instructions were not followed to the letter – that’s not just irresponsible, it’s ludicrous.  If there is ever any doubt about the integrity of the testing methods then you have to throw out the results and redo the tests correctly.

To clarify – I’m not defending the product.  It’s possible that there could be legitimate issues here that CR has uncovered.  But for the sake of all that’s good in this world, redo the tests (installing the seat the way it’s supposed to be installed) and let’s settle this!  Additionally, it seems that there was originally a press video released by CR to the public that showed the Orbit Baby infant seat installed incorrectly without the base.  When Orbit Baby brought this misuse to CR’s attention they “…acknowledged their mistake and have since edited the video”. To be honest, I never saw the original press video so I can’t vouch for this incident but if it’s true… well, that doesn’t exactly inspire a lot of confidence in their abilities, now does it?

Really, these blunders are NOT helping CU to regain any of the public trust or credibility that they lost after the last infant carseat testing debacle. I appreciate that they’re trying to help the cause and improve crash protection for children in motor vehicles. However, if they are going to tackle complicated projects and issues then they need to be committed to doing them the right way. Otherwise, they should stick to reviewing digital cameras and deck stains and leave the complicated stuff to qualified professionals.