Anyone who has had a baby in an infant car seat has faced the grocery store dilemma- what to do with baby while you’re shopping? Especially a sleeping baby. And I know we’ve all seen what seems like the easiest answer- putting the infant seat, with baby, into the top part of the grocery basket.

There are signs posted on the infant seat and virtually every car seat manual says that you shouldn’t do this, but, is it really as unsafe as the signs lead us to believe? Is there a reason we can’t make use of this incredibly useful position for baby? Let’s find out.

MYTH: Infant car seats can safely “click” into the tops of shopping carts if you hear an audible “click.”

First, I would like to clarify that yes, there once was a seat that specified in the manual that you could do this (the Baby Trend Flex-Loc), however, the current manual does not allow it. So let’s set aside that seat/manual for the remainder of this discussion because it’s no longer true of that model of car seat.

As CPSTs, we counsel parents on this one quite a bit, mostly because nearly every infant seat manual specifically states not to put the car seat on top of the shopping cart. But do we know that it’s actually dangerous? The answer is sort of.

The Consumer Product Safety Commission has put forth a document describing the injuries to children related to grocery charts from birth to age of 5. Within that report, they state that

“Of the 12 incidents reported as falls, three involved a car seat with the child in it falling from the shopping cart; of these three incidents, one was a fatality and one involved a hospitalization. The fatality occurred when a 3-month-old boy fell while secured in a car seat that was not secured to the shopping cart after the cart was pushed over a speed bump in the parking lot.”

More on that terrible tragedy in a moment. It further states that,

“There were nine incidents coded as “other,” covering a range of hazards. Five of the reports concerned failures or inadequacies of the restraints in the shopping cart seat (including one involving a car seat); none resulted in injuries.”

So, it’s clear that a car seat improperly placed on a grocery cart can cause injury to an infant. Upon further searching, the single death cited by the CPSC did involve an infant seat in the top of the grocery cart. In a news report on the child’s death they report that the seat was placed in the part of the car closest to the push bar, where a toddler might sit, which is precisely the myth we are discussing. 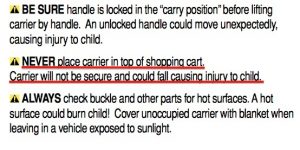 Just in terms of design, a cart can be very top heavy if not properly balanced. Anyone who has tried to stand on the bottom basket while pushing has felt that tipping motion and you can imagine if you have a 20 pound child in a 12 pound car seat, it wouldn’t take much for the cart to tip and the child to be injured. But I think there’s another piece to consider.

Your rear facing only car seat is made to click into one style base. You cannot put a Graco infant seat in a Chicco base because the locking mechanisms are not interchangeable. And the same is true for an infant seat and a grocery cart. You may hear an audible “click” but that does not mean that the seat is actually locked in because you have no way of knowing if the shape of the grocery cart is similar to the shape of your infant seat base. The part of this is that because the shape of a grocery cart won’t be the same as the shape of your base, trying to click it onto the cart might actually ruin the locking mechanism of your car seat. And you wouldn’t necessarily be able to see that or know that it wasn’t working until it was stressed by a crash.

Yet another hazard is a potentially broken shopping cart. The carts are used by dozens of people each day and they will break down over time. How terrifying would it be if this was your car seat with your child in it?

And last but not least, car seats are not meant to be used for long durations outside of the car. I know it’s convenient, believe me, I’m guilty of using my car seat for a few more errands than I should, but that doesn’t mean it’s safe. Car seats are meant to be at a very specific angle and if they are too upright, as they often are in strollers and grocery carts (especially when in the top of the cart) baby may not be able to breathe properly. And, obviously less seriously, excessive use of infant car seats can result in flattening of the back of baby’s head (brachycephaly), which may require use of a head orthosis to correct later on.

VERDICT: Between every manual and grocery cart forbidding it, the CPSC report and the potential to break your car seat, I think we can call this one BUSTED. Even if your car seat seems to “click” into the cart, that doesn’t mean it’s safe to be left there.

If you need to take your baby grocery shopping, you have a few safer options than the top of the cart. You can wear baby in a carrier or sling, you can bring baby in a regular stroller and use the stroller basket as your cart (this is what we do the most), or if you really need to use your infant car seat, you can place it in the big part of the grocery cart and put the rest of the groceries elsewhere. But the best option in my opinion is to get someone to babysit so you can stroll the aisles, childfree, as if you’re on vacation. Not that I do that or anything!

Please please please, don’t put your infant car seat in the top of a grocery cart. It may seem secure, but it only takes a split second for your infant to become a statistic.