Home  »  Safety • Vehicles   »   Collapsing Vehicle Seat Backs: What Can You Do? 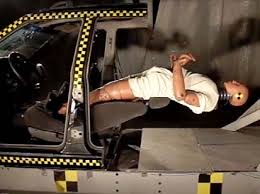 If you’ve paid attention to the news during the past year or two, you’ve probably come across some stories about front vehicle seats collapsing in crashes. In some cases, drivers and backseat passengers—including children—have been killed. Clearly, this is a potentially important safety matter, and one that an outlet like CarseatBlog should tackle, which we haven’t done until now.

It’s not that we haven’t noticed; it’s that usually when a subject like this comes up, there’s some kind of relatively easy way to avoid the problem. This one, like the Takata Airbag issue, is tough to write about because so much is out of a consumer’s power to avoid it. But we’ll try.

Basically, this is an issue of seat strength. In some rear-end crashes, especially high-speed ones, front vehicle seats have been found to collapse backwards. This can cause injuries to the front seat occupant, from “simple” whiplash to more extreme injuries like paralysis or death when the occupant ramps upward and hits the back seat or another part of the car. It’s also possible for people to be ejected backwards.

Because of reporting procedures, it’s hard to get an exact number on the amount of fatalities caused by collapsing seat backs. One expert interviewed by CBS news says that seat backs collapse (though not necessarily fatally) every day. That same report says that at the time of the story, nine children were known to have died due to collapsing seat backs. In another CBS report, a spokesman for The Center for Auto Safety, a consumer protection organization, says that 50 children a year are killed that way. Clearly there is a huge discrepancy between 50 per year and nine in an unknown timeframe, and I don’t know if anyone has definitive answers.

The National Highway Transportation Safety Administration and vehicle manufacturers have been aware of this problem for decades. CBS’s 60 Minutes first tackled the issue back in 1992. According to one of the recent CBS reports, back in 1992 a man named Paul Sheridan was in charge of a minivan safety team at Chrysler. He knew about the problem of seats collapsing and tried to take steps to research and correct it, but Chrysler instead dismantled his team and withheld evidence. At the time (remember, this is 1992) NHTSA said it would look into the issue. Nearly 25 years later, nothing has changed.

NHTSA and manufacturers claim that current seat backs meet or exceed the federal standard (FMVSS 207) for seat strength, and that’s probably true. The problem is that the standard was established in 1967 and has not been updated since then. Also, the test is static not dynamic (meaning that seats are exposed to a long pull of increasing resistance rather than a sudden change of force, like what happens in a real-life crash).

It’s not FMVSS 207 that the seats are failing. Where they’re found failing (other than in real life) is in FMVSS 301, which tests fuel system integrity. According to this article (admittedly from a law firm that specializes in crash lawsuits) in the crash tests for FMVSS 301, “almost all bucket seatbacks and split bench seatbacks fail and strike the rear seats.”

I was unable to access the source they used, but I did find a report submitted to NHTSA from SAFE Laboratories, an independent research and crash testing facility. That report showed of 21 tests, nearly all resulted in the seats collapsing. It said, “Although all of the above vehicles incorporated FVMSS 207 compliant seats, when loaded dynamically in a rear impact these seats consistently failed to prevent occupant excursion into the rear compartment and potentially injurious impacts with rear structures or rear seated occupants.” 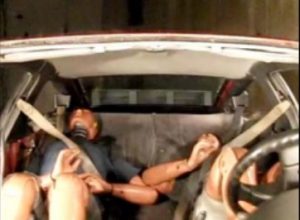 How has NHTSA responded to the increased media attention surrounding seat failures? Essentially by saying it’s not a problem. They say there’s not enough data to demonstrate a real-world benefit to changing the standard for seat strength.

The Warner family, interviewed by CBS, lost their toddler in a crash when the father’s seat back collapsed on her. That father said he imagines almost anyone would be willing to pay another $50 for their vehicle if it meant their seats wouldn’t collapse on their children.

The study I referenced above from SAFE Laboratories showed that adding a second recliner to seats limited how much the seats would pivot in a crash, thereby making them more stable. I’m not sure if that’s the fix the GM engineer referred to, but there are likely many possible solutions.

What You Can Do

There’s no surefire solution to this one, but here are some things that might help.

Rear-facing is safer overall, and the vast majority of crashes are frontal collisions (vs. the rear collisions where the seat backs are collapsing). It’s hard to say how much of a difference it would make for a child to be rear-facing vs. forward-facing if a seat back collapses on them, but it’s possible that a rear-facing child restraint might offer some additional protection if it’s able to stop the front seat back or keep t 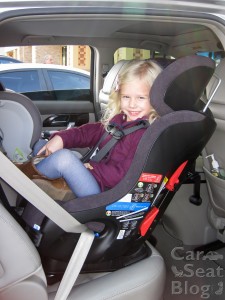 he child’s body contained within the shell. It’s also possible that the child restraint wouldn’t be strong enough to make a difference, but at least there’s that possibility.

(On that note, I have seen at least one instance where a forward-facing child was killed due to a known/suspected seat back collapse, and the immediate response of some safety advocates was that it wouldn’t have happened if the child had been rear-facing. First of all, we have no way of knowing whether that’s true. Second, that places blame where it doesn’t belong. The child might have been saved by a rear-facing seat, but the child almost definitely would have been saved if the front seat hadn’t collapsed in the first place.)

Keep children in the back seat

Some people are going to panic and think “The back seat is too dangerous now! Better move the kids to the front!” I understand the sentiment, but please don’t do that. The back seat is still the safest place for children. The front seat comes with its own dangers, for example airbags designed for adults (or ones that could malfunction) potentially hurting children. The vast majority of car crashes are frontal collisions, putting those front seat passengers closer to the point of impact. Also, if a child were to be sitting in the front seat and that seat collapses, the child is still likely to be injured.

I sort of hesitate to recommend something that’s not an “official” recommendation from the CPST curriculum, but in this case I think it makes sense, when practical. In March, the Center for Auto Safety petitioned NHTSA to warn parents not to seat their children behind occupied front seats. (As far as I know, NHTSA has not yet responded and probably won’t. After all, if the agency implements that recommendation, it would essentially be admitting that collapsing seats are enough of a problem to warrant a warning. If it’s serious enough to need a warning, it’s serious enough to need fixing, which NHTSA has said isn’t the case.)

If you’re concerned, though, and if you have the room, it’s a logical solution to place children in seating positions where there isn’t an occupant in front of them. Of course, unless you have only one child (and sometimes not even then), that’s not always possible or practical.

I don’t want to see this become an official recommendation because it’s one that’s just too hard for most people to follow. But when the question of “Which side is safer: the driver’s side or passenger side?” comes up, maybe it can help to take the presence of front passengers into consideration.

According to this CBS report, their experts state that BMW, Mercedes, and Volvo have stronger seats than their competitors. They don’t provide information to back up or explain those claims, so possibly take that with a grain of salt.

I know it’s a scary thought. No one wants to think about their child being killed by a collapsing seat, especially when there are already so many other dangers out there, and especially when there’s often no way to avoid a child sitting behind an occupied seat. Remember that these seat failures are occurring in rear-impact crashes. Rear-impacts are usually very low speed and account for far fewer fatalities than front- and side-impact crashes. The FMVSS 301 testing occurs at 50 mph, far faster than the typical fender-bender in heavy traffic. Although this does seem to be a serious issue that needs action, the odds of a child dying from a seat collapsing are very, very low.

If you’re concerned about this, take action. Write to your elected representatives and to NHTSA and push for a change in the standard. Write to your vehicle manufacturer to express your concern and demand that they increase the strength of their seat backs. Manufacturers know that money talks—make them listen.