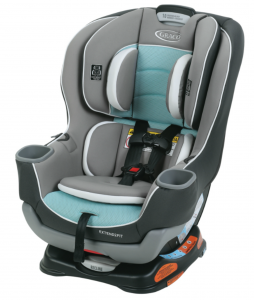 What’s the one thing most people say when faced with an older rear-facing toddler? “What about their legs? Aren’t they uncomfortable?” Well, no, actually, but Graco has taken the bull by the horns and addressed this issue with their new Extend2Fit convertible carseat. Their engineers have designed a unique tray that slides out to accommodate growing legs as a child sits rear-facing, giving epic legroom while still maintaining legroom for the adult in the front seat. They gave it a 50 lbs. rear-facing weight limit then added 2 (count ’em!) cup holders! How do they do it and for a reasonable price point? Keep reading and see if the Extend2Fit is the seat for you and your child.

*We recommend following the American Academy of Pediatrics minimum guidelines of rear-facing to at least age 2 before turning your child forward-facing. It’s safest to rear-face past the minimum of age 2 and with a seat that has such a high rear-facing weight limit, why not? 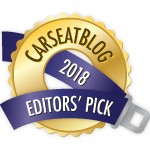 Graco also offers four other versions of the Extend2Fit. Here’s a quick overview of the differences:

Extend2Fit with RapidRemove: Has all the E2F features plus an easy-to-remove cover. MSRP $219.99

Extend2Fit 3-in-1: Has all the E2F features plus the capability of being used as a highback belt-positioning booster seat from 30-100 lbs. MSRP $249

Extend2Fit 3-in-1 with TrueShield: Has all the E2F 3-in-1 features plus TrueShield technology, an extra layer of side impact protection. MSRP $279.99

Installation was amazingly easy in my ’11 Acura MDX using either the vehicle seat belt or the lower LATCH strap. The LATCH strap is attached to the inside right side of the carseat with a metal bar, so it will never get tangled in the harness straps. The E2F comes out of the box set up with the LATCH strap set in the rear-facing belt path, so unless you are using it for an older child who will be forward-facing, there’s no need to move it. To move the LATCH strap, lift the cover and slide the strap up to the forward-facing belt path. 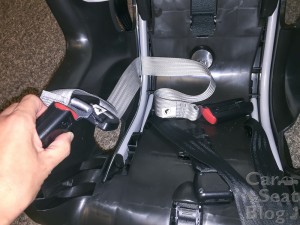 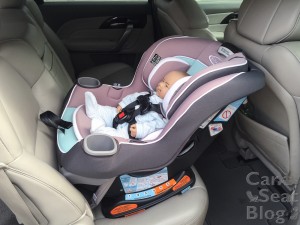 The lower LATCH connectors on the Extend2Fit are the deluxe push-on style, called the InRight LATCH system by Graco, which easily snap onto the vehicle’s anchors and remove with the push of a button.

This is a feature-rich carseat and as such, there are several things to keep in mind when setting the Extend2Fit up for rear-facing.

4 rear-facing recline settings: Infants 3 months and younger must have a recline that allows the ball in the recline angle indicator to be fully in the light blue circle, but after that age, you can make the recline as upright as your child is comfortable. The recline handle is on the very bottom of the seat and you pull on it to engage the mechanism.

4-position extension panel: If you would like additional legroom for your child’s tootsies, squeeze the handle under the front of the seat and pull the panel out to one of 4 positions. To be fair, there are really 3 extended positions, since position 1 is fully retracted. For kids over 40 lbs., any of positions 2-4 must be used (any extended position). With the extension panel fully extended, it’s the most legroom of any convertible carseat on the market. 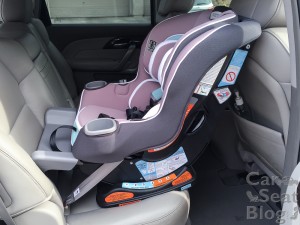 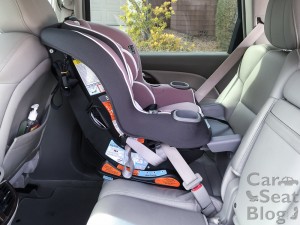 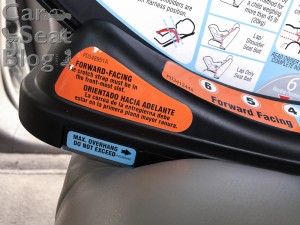 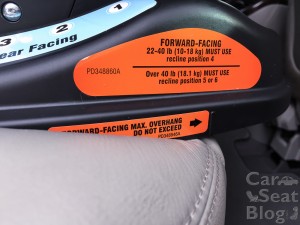 There are also some attributes to keep in mind when using the E2F forward-facing.

Use recline position 4 only for children weighing 22-40 lbs.: This is a very reclined position for forward-facing and will leave very little legroom for many kids in most vehicles. Unless your child has outgrown the carseat by height, it’s worth it to leave them rear-facing in this weight range. Kids over 40 lbs. must use recline 5 or 6. 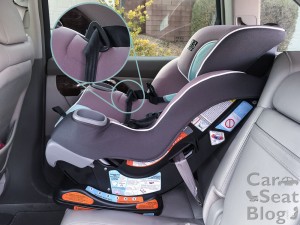 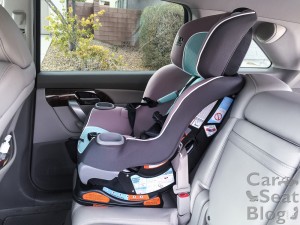 No extender: Put that leg extender away. It’s for rear-facing only! No exceptions.

No harness covers: Remove the harness covers and put them in a safe place when using the E2F forward-facing. It’s as if Graco wants you to use this seat rear-facing!

As always with any forward-facing installation, don’t forget to use the top tether regardless of whether you install the Extend2Fit using the seat belt or lower LATCH strap.

For fun, I put the E2F in my dh’s Tesla Model S and it fit nicely both rear- and forward-facing. In fact, it fit better rear-facing because the back seat doesn’t have the side bolsters like my back seat does, so the Extend2Fit was able to sit further back on the vehicle seat, leaving more room for the front passenger seat. Using the E2F in its tallest position, though, won’t work in this vehicle because of the low ceiling height. Even though our back seat is stained with red softball dirt, I didn’t want to risk damaging the headliner by installing the E2F and extending the headrest to it’s uppermost position. I did get it to one position below the highest. 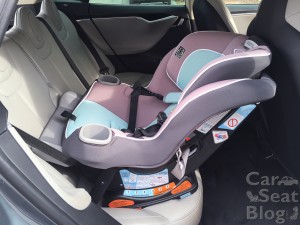 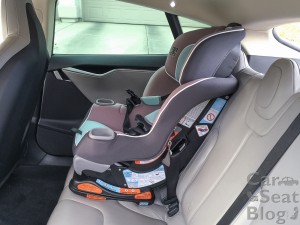 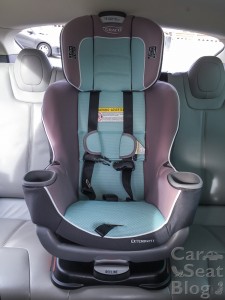 Center LATCH installations with Non-Standard Spacing:
Graco allows LATCH installation in the center seating position if the vehicle manufacturer allows it and the LATCH anchor bars are spaced 11” apart when measured at their centers.

Locking Clip
Like most other convertibles of its generation, the Extend2Fit does not come with a locking clip. If your seat belts do not lock at the retractor or at the latchplate, you will need to contact Graco for a locking clip.

The Extend2Fit is designed to fit children from 4-65 lbs. and to fit small babies, a body support and head pillow are included. The body support must be used if the baby’s shoulders are below the bottom harness slots, and it must be removed when the E2F is turned forward-facing. The harness pads also must be removed upon forward-facing. The head pillow can be removed at any time. Though it looks puffy, the pillow actually compresses pretty easily so bigger noggins will be comfy with it too.

My 4 lbs. preemie doll did not fit well in the Extend2Fit; this is not a carseat that will work for a very small newborn. The harness was too high and there was too much space around the hips and crotch. My doll, Romeo, is about the size of an 8-9 lbs. newborn and he fits well without the body support. In the rear-facing fit section, the instruction manual specifies that the harness height must be at or below the child’s shoulders. 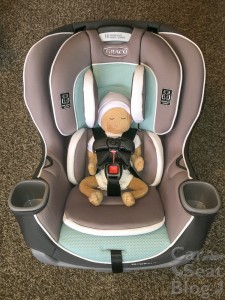 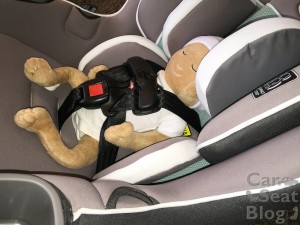 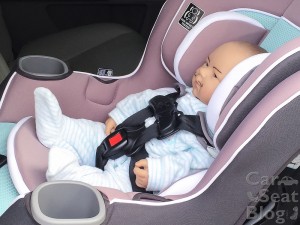 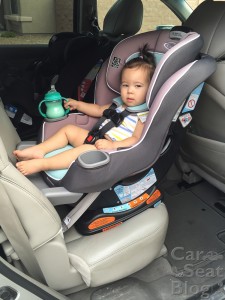 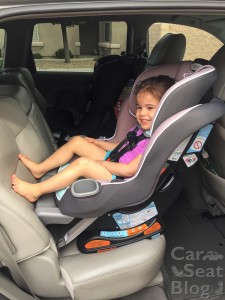 Nora, left, is 1 and around 25 lbs. Emma, right, is 4 and about 30 lbs. You can see the abundant legroom the Extend2Fit offers both girls. 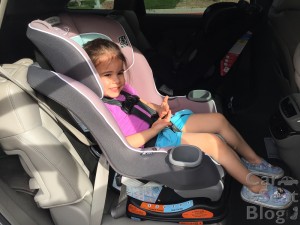 Here’s Emma forward-facing. At age 4, she’s very safe to ride in this position.

The cover that shipped on my seat wasn’t the easiest to remove. It was attached in 4 places with tight elastics that had me saying some not-so-nice things and since this is a family blog, there’s no need to impress you with my knowledge of sailor vocabulary (no offense to sailors intended!). Two of the elastics are attached under the extender. If you undo one of those to lift the cover to expose the rear-facing belt path, it is impossible to reattach if the extender is retracted. It is nearly impossible to reattach if the extender is extended at all. I don’t think that over time a child will work the cover up in that location getting in and out of the seat since it’s so tightly attached around the cup holders, but it is poor design. There are also 2 little elastic loops at the top of the torso section that are used by Graco to hold marketing tags. You may try forever to hook those little suckers to something but they don’t go anywhere. It’s OK and not a failure on your part.

I also don’t like elastics because they’re hard to thread through tiny holes or slits to attach to hooks and they don’t last more than a single hot season here in Las Vegas. OK, so I’m clearly not a fan of the logistical design of this cover, though I do like the look. I’m especially fond of the seafoam blue-ish Spire cover on the sample I was sent; it’s lovely, though all the E2F covers are sharp-looking. Some of the covers are mesh in the seating area and my experience with mesh is that crumbs can be ground into those little holes and never see the light of day again, so stay on top of the snacks. The cover can be washed in the washing machine on cold and air-dried.

The harness is one long length, but it has a butterfly attachment in the middle under the child’s bum area, so there’s not a possibility of one side being longer than the other. It can be cleaned like any other: dip a washcloth in water and use a drop of mild soap (Dawn, Dreft) to clean it. Be sure to wipe off that soap with the wet washcloth and let the harness thoroughly dry. Set it in full sun if it still stinks. But . . . the harness *is* replaceable, so if it’s just that nasty, buy a new one!

Graco has gone to a 1-harness-slot design on their no re-thread convertibles, which means that it will be more difficult to tighten and loosen the harness in lower “slot” positions because the headrest is pushing on it, causing friction. As your child gets older and taller, there will be less friction and it will be easier to use. 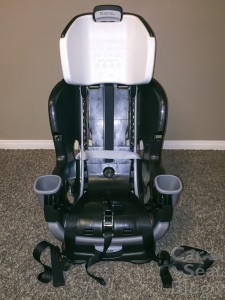 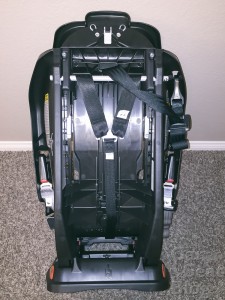 The Extend2Fit is FAA-approved, but you will most likely need to raise the armrests on the airplane seat to get it to fit because of the cup holders.

The Extend2Fit has a lifespan of 10 years and Graco wants you to replace it after any crash.

Disadvantages (In fairness, these aren’t necessarily problems but I list them here to inform potential consumers of specific Extend2Fit issues)

In a carseat universe increasingly dominated by All-In-One carseats, the standard Graco Extend2Fit is a great convertible carseat that is also a tremendous value when on sale.  Not surprisingly, it is one of our 2018 Editors’ Picks Recommended Carseats.

Thank you to Graco for providing the Graco Extend2Fit used for this review. No other compensation was provided. All opinions expressed are those of CarseatBlog.

Leave a Reply to Heather