Home
Uncategorized
That Time I Got Stuck in a Car, in Public
Tweet Pin It

I’ve found myself “stuck” in a car on more than one occasion, usually from installing a child restraint in the back seat and forgetting the child locks were on, requiring me to climb into the front seat to get out.

But until the other day, I had never been truly wedged in a car—and certainly not in such a public venue as where it happened.

You see, Darren and I went to the Chicago Auto Show, and we wanted to try out the features of the upcoming Chrysler Pacifica minivan. He was excited about trying the buttons that fold the third row. I was interested in exploring the strange LATCH set-up in the third row.

In retrospect, we should have taken turns exploring those aspects of the car, because you can’t really do both at once. I was sitting in the third row looking at the LATCH anchors when Darren started pushing buttons. Suddenly the 60 part of the 60/40 split started coming down on me.

“Oops!” Darren laughed, as he pushed other buttons to try to get the seat back up.

“Haha!” I laughed. No problem—I just scooted over a bit onto the other side of the seat, which hadn’t yet folded.

But the 60 side wouldn’t go back up. Darren speculated that maybe it needed to go all the way down first and maybe I was still sitting partially on the seat, blocking its descent. I didn’t seem to be, but I scooted over further onto the 40 side of the split and Darren hit the button again.

Only this time, he accidentally hit the button to fold the seat I was sitting on (again), and this time, I didn’t have anywhere else to move. The 60-side of the seat next to me was still partially folded down, blocking my exit in that direction. There was a man sitting in the captain’s chair in front of me (not that I would have been able to get out that way if it were empty).

No problem. I assumed the seat would have some kind of feature that stopped it from folding if it met resistance.

The seat kept folding and folding, and I kept sliding forward as much as I could (which wasn’t much) to avoid it. After a few seconds, I was completely and literally trapped in the third row of the Chrysler Pacifica. My side and hip were folded up in the third row, and the rest of me was wedged against the seat in front.

It was uncomfortable (my side hurt for a while afterwards), but mostly it was funny, so I laughed. I laughed so hard, in fact, that I had tears (of laughter) streaming down my face. Of course, this whole thing happened right after Chrysler’s big presentation to introduce the minivan, and to the throngs of people milling around it looked like I was crying tears of pain. They stopped to look.

“Is she okay?” I heard a couple people ask Darren.

I’m not sure they believed me. More people gathered around.

Darren gave up on trying to use the buttons to get the seat back up, but he did “help” by taking a picture. Unfortunately it wasn’t a very good picture, so I’ve created an artist’s rendering to give a better idea of what happened: 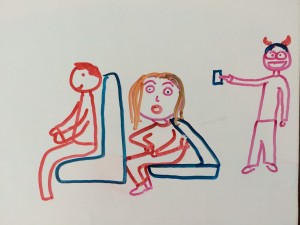 Eventually I was able to wiggle out. The seats stayed stuck, though. One of the Chrysler people tried for about ten minutes to get them to work, but after that Darren and I slunk away since we felt bad about breaking their van. (To be fair, the one seat had stopped working even before I got stuck in the other one, so I don’t think it was actually our fault.) We went by a while later, though, and the seats had been restored to their normal position, so I assume they got them working again.

For anyone concerned about the safety or reliability of the folding third-row seats, I’m sure there will be a warning in the manual to clear the area before folding them.   Based on our experience, they will probably design in an automatic stop system!  These were pre-production models at the show that might not have had all bugs worked out, so we were happy(?) to help them find this flaw before they are sold!

But in the future, I’m going to stay out of Darren’s way when he starts pushing buttons.

Stay tuned next week or our preview of the 2017 Chrysler Pacifica minivan.