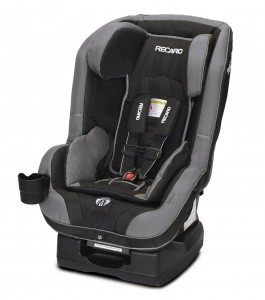 Today Consumer Reports released information on a safety issue they identified during testing of the Recaro Performance RIDE convertible. In crash tests using their new test protocol, the harness support hardware in the back of the Performance RIDE shell broke. This allowed the harness to pull through the seatback and loosen as the dummy moved forward. This structural failure occurred in three of four Performance RIDE tests using the 35 lb 3-year-old dummy. In all three cases, the seat was installed forward-facing on the test sled using LATCH (lower anchors and tether).

According to Consumer Reports:

The potential risk of a harness that loosens in an actual vehicle crash would be the increased forward movement of the head and added potential for a child’s head to contact some surface in the vehicle interior. There also is increased risk for the child to be ejected from the seat, and for the harness to no longer secure the child for any secondary or subsequent impacts or events.

I think it goes without saying that we take carseat safety very seriously around here and while these findings are concerning (especially when you consider that these same seats were recently recalled for unrelated performance issues) we want to make sure that Performance RIDE owners have a full understanding of what is going on so they can decide for themselves what action, if any, they should take.

First and foremost, it’s important to know that the new Consumer Reports carseat crash test was developed to be more rigorous than federal standards. CR realizes that not all carseats are created equal even though they should all meet the basic safety standards of FMVSS 213. Therefore, CR set out to develop a test to try to determine which carseats provide extra levels of protection beyond the standards already established by NHTSA. The CR test is very different from the FMVSS 213 tests that all child restraints are expected to pass in this country.

Since this is a new and more stringent test, we don’t automatically think that all seats that earn a “BASIC” rating from CR are unsafe in some way. On the other hand, no other convertible seats tested by CR using the new crash test protocol had these specific issues with the 3-year old dummy that weighs 35 pounds. Now, we are fully aware of the differences between running a test at 27-30 mph (FMVSS 213 speed) and running it at 35 mph (NCAP/CR TEST speed) but the fact that these convertible seats are rated up to 65 pounds forward-facing and yet may possibly experience issues with the 3-year-old dummy doesn’t exactly inspire confidence.

CR reports that the Performance RIDE had similar failures with the 6-year-old, 52 pound dummy in their test, installed using the lap/shoulder seatbelt and tether.  Four other convertibles of the 25 tested also failed with the larger dummy, though this is a much more extreme test in their new, higher speed protocol.  Also, most Recaro Performance RIDE and ProRIDE convertibles were recently recalled for failing to meet certain FMVSS 213 performance standards. It was a failure unrelated to the issue CR encountered and Recaro is sending a recall remedy to all owners of recalled seats but it was a performance failure nonetheless and it affected most of the convertible seats Recaro had made in the last 5 years.

If you are currently using a Recaro Performance RIDE carseat in the rear-facing position you don’t have any cause for concern at the moment since both the recent recall and the concerns raised by CR are related to issues that may potentially occur when the seat is used forward-facing.

If you are currently using a Recaro Performance RIDE carseat in the forward-facing position, fix your tether strap with the recall kit if your seat has been recalled and continue to monitor the blog for further updates, if any, regarding your carseat.  This issue reported by CR is not a second, new recall for your seat and there have been no public complaints made to NHTSA regarding this issue. As always, if your child is under 40 pounds and still fits in the rear-facing position, turn the seat rear-facing for optimum protection. Forward-facing, make sure the installation is tight and the harness is snug and continue to use it with caution until we learn more.  If your child no longer fits within the rear-facing limits, please consider another convertible or forward-facing carseat from our Recommended Carseats list.

“The Recaro Performance RIDE convertible car seat has saved the lives of many children involved in a car crash and has never experienced a field failure after being in the marketplace for over five years. Recaro tests to meet and exceed all National Highway Traffic Safety Administration (NHTSA) crash test requirements. The research by Consumer Reports was conducted with a crash test at 40 percent more energy at its peak than current NHTSA standards. We want to reassure our consumers that we take all aspects of a child’s safety seriously and will examine these findings closely. Recaro appreciates Consumer Reports’ interest in child passenger safety.”