We car seat geeks focus on restraints, but we tend to forget about the true 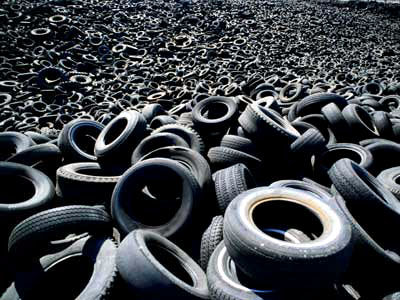 workhorses of the vehicle: the tires.  While getting the family ride ready to go to the Happiest Place on Earth, dh noticed that the tires were looking a bit worn down along the edges.  I looked at them and yup, all 4 tires were wearing a bit thinner than either of us liked to see on the edges, but the middles still have plenty of tread left in them.  Between the two of us, we couldn’t figure out when or if we had ever replaced the tires; we bought the van new in April 2005, so it’s been 4 years.  That’s a mighty long time to have a first set of tires on a vehicle, but aside from a handful of long trips, I mostly drive it within just a few miles of my home on a daily basis during the school year (in the summers, I’m begging the kids to run errands somewhere, anywhere, just to get out of the house!).  The van still has less than 40K miles on it!

I’ll be forthright and say that I don’t take the very best care of my tires.  I’m a stickler for keeping the air pressure at what the vehicle owner’s manual recommends because of some lousy tires that I had on my first new car—I had to add air to those tires every week because they lost 4-5 lbs. per week!  But I’m really bad at having them rotated on a regular basis.  I guess the dealer rotates them during the normally scheduled maintenance?  I hope so.  But I do inspect them and make sure they look OK from time to time.

So in doing research in whether or not they need to be replaced, a friend forwarded this great video to me.  I remember seeing it a while ago, but it’s good to watch again.  It’s about how to tell when your tires were made.  Just like car seats, tires expire.  It makes sense, doesn’t it?  Rubber dries out and cracks and we don’t want to be driving on that, do we?  Six years is the recommended life span of tires, just like some car seats, so it’s an easy number to remember.  My van’s tires are 4 years old—the same age as the van.

Something you can do is purchase tires online then have them installed at a local shop.  http://www.tirerack.com/tires/specialevents.jsp?PID=1337476&AID=10399972&  is one site that’s been recommended to me and if you go through the link I provided, our very own Nicole (QuassEE), moderator at c-s.org, will get a small commission.  You can, of course, go the traditional route of heading to a store that sells tires, but until Darren mentioned one time that he had bought a set at Tire Rack, I had never even dreamed you could buy *tires* online.  Go figure!

I just hate to think about the original spare tire that may still be in dh’s old ’72 Datsun 240Z.  His grandpa bought the car new and gave it to dh when we were in college.  The spare tire was never used and many mechanics through the years told him it was a safe tire to use if it ever needed to be.  That tire would now be 37 years old and I hope the collector who bought the car to restore it either replaced it or put it aside in a safe place to never be used.