It’s been The Buzz for some time now and we finally have one for review!  It’s the Safety 1st Complete Air Convertible with the Air Protect side impact technology cushions.  This model can be used rear facing from 5 to 40 pounds and 19-40 inches.  Front-facing, the limits are 22-50 pounds and 34-45 inches.  It is now available in the Complete Air LX version with improved recline and the original Complete Air as described in this revew.  I can’t tell you how it will perform in a crash, but I can tell you that it is feature packed and makes for a very nice covertible child safety seat.

Next, the “Revolutionary Side Impact Technology.”  This comes in the form of air filled cushions on the inside of each head restraint wing.  It essentially replaces the EPS foam found on most child restraints with an air-filled cushion.  It’s not an airbag, so there’s no inflation involved.  It’s basically a disc of open cell foam, surrounded by a perforated plastic bag.  When compressed, the air released is restricted by the size of the holes, allowing it to increase the ride down time of the child’s head before it reaches the plastic shell or an intruding part of the vehicle.  Whether or not this is a significant improvement over EPS foam (similar to what you find in a bicycle helmet) I cannot say, but it looks impressive: 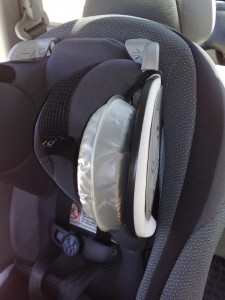 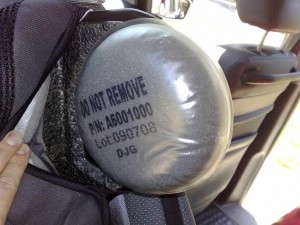 The other big feature of the Complete Air is the 40 pound rear-facing weight limit.  A wise man once said-

Rear-facing provides the most crash protection in the most common and severe frontal and side impacts.  There is a stigma for a lot of parents regarding rear-facing.  Many have the impression that kids should be front-facing once they are 1 year and 20 pounds.  Even some physicians still give this obsolete advice, contrary to the recommendations of the American Academy of Pediatrics.  Other parents just think their kids need to be front-facing for comfort or some other issue, or that turning front-facing is some sort of rite of passage or graduation award for being a year old.  Well, now there’s a reason why front-facing shouldn’t be a reward for many kids until they turn 4-years old!

The Complete Air is the second new model in the USA with a 40 pound limit.  Combined with that, Safety 1st gives a rear-facing height limit when top of the child’s head reaches the top of the adjustable head restraint section.  That is extremely generous, as you can see in the photos below.  On the left, my son is properly fitted with the adjustment in the 3rd from highest position and the harness slots are just below his shoulders.  On the right, you can see how much room he has with the headrest in the highest position!  He is 4 years and 2 months old, 43″ tall and weighs 40.0 pounds on our scale (clothed but without shoes!). 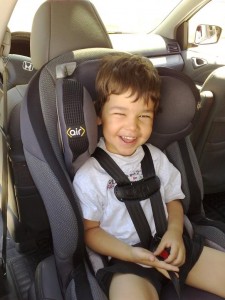 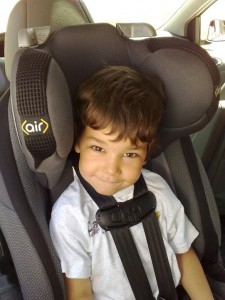 The only drawback is the stated 40″ rear-facing height limit.  There’s a nice “Safety Tip” section in the front-facing section that advises parents to use the seat rear-facing as long as possible, up to the 40 pound and 40 inch limits.  As is often the case, the standing height limit may be somewhat arbitrary, as it is mandated by the relevant standards.  I am not advocating that you exceed the limits in the owner’s manual, but include these photos for comparison purposes.  Leg room is limited by the vehicle seat, as it is with any rear-facing model in the USA or Canada.  As for front facing height limits, many readers will want to know about the maximum torso height.  This photo should be self explanatory: 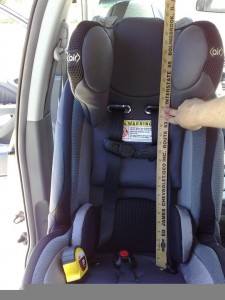 The rear-facing install angle was relatively upright in my minivan; fine for larger kids and older babies, once they can support their head well. It may need a pool noodle or rolled towel in many vehicles to get the 45 degree recline angle necessary for newborns and small infants.  There is a level line on the side of the shell, but not an actual indicator like you find on infant seats and some other convertibles.

Pros?  Well, rear-facing to 40 pounds is a real safety advantage.  One study indicates that rear-facing is especially advantageous in side impacts.  So, if the Air Protect cushions work as advertised, the combination is a legitimate safety benefit.  The generous harness and torso height settings are also a big plus, though they are mitigated by the published standing height limits that seem artificially low.  Deluxe push-button LATCH attachments make it easy to connect and disconnect from the anchors found in newer vehicles.  Front-facing LATCH installations are relatively straight forward with no unusual issues in my minivan.

The harness height mechanism is fairly easy to use from the front, even while installed.  You do need to make sure the harness is loose enough to adjust it higher and also make sure it clicks into place, especially at the top position.  The crotch strap has 3 positions, another nice addition.  The Complete Air is well padded and the cover fits well at the edges.  It’s made in North America (USA), another key selling point, in my humble opinion.

Cons?  It’s pricey at $249.  The LATCH attachments require rerouting to switch between rear and front facing use.  Though not difficult, it does take a few minutes to do.  There’s only a single tilt adjuster on one side.  Combined with the shape of the shell and position of the rear-facing belt path, you can’t quite get an ideal angle to tighten the LATCH straps rear-facing.  Even so, it installed well in my 2006 Odyssey, but it took a little more time than some other models.  Similarly, when installed rear-facing, the harness adjustment strap can be a little hard to pull to tighten it the last inch or so.  That’s mostly due to the angle you have to use to pull the strap, but could also be due in part to a new mechanism that needs some use to loosen up a bit.  It also appears that the harness straps can twist at the buckle.  Though it has EPS foam and the Air Protect around the head, it does lack EPS foam elsewhere.  Finally, the detachable cupholder is already being used as a hand hold to get into the van, I hope it doesn’t pop off in the process!

I have only had the Complete Air for part of one day.  I’ll post a full review by the end of July as I get some experience with it.  I’ll look over the manual thoroughly, try seatbelt installations, install in other vehicles and have some more photos, too.  At first glance, it seems quite nice overall.  It’s among the higher priced convertibles, but you do get some innovative features for the money.  You can find the Complete Air, Complete Air Special Edition and Complete Air LX (new base with imprved recline) at many stores!  Anyway, if it’s within your budget, the Complete Air is definitely worth consideration along with other competitive premium convertible models.