Home  »  Mythbusting   »   Mythbusters – You need an infant carseat for a newborn!

Presenting to you, another “episode” of CarseatBlog Mythbusting! This week we explore a common myth that plagues many first time parents.

Myth: You’re having a baby, therefore you need to buy an infant car seat.

We see it everywhere. The endless travel systems, the accessories to make it easier to carry that bulky infant seat without breaking your forearm, the preselected registries. It’s no wonder those who are first entering into the world of transporting babies haven’t even thought there was an alternative. And let’s face it, babies are portable, infant seats are portable, so they go hand in hand nicely. 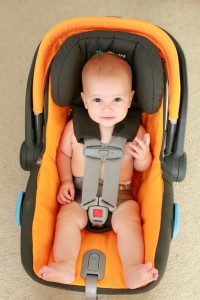 In a 3 year study done by the American Academy of Orthotists and Prosthetists, 28.6% of infants spent between 1.5-4 hours a day in either a car seat or swing. This study was done between 1998 and 2000, and we all know the increase and abundance of travel systems has gone up quite a bit since then! As a society, we spend so much time in the car. When using an infant seat, the convenience of taking it in and out of the car instead of removing the baby while running errands is surely a luxury, but when you add up the hours the infant has spent in that infant seat, it may be startling.

Most infant seats are heavy. Heavy being a relative term but when you add an infant older than a few months, it’s like lugging around a bowling ball in a purse. They’re awkward, and do you ever think about how many weird visuals your baby has gotten when placed on the floor and looking up? It’s a world of knees and crotches!

Babies outgrow some infant seats relatively quickly. Lots of people find it difficult to squeeze a convertible into the budget after purchasing an infant seat only to use it for less than a year. Skipping the infant seat altogether can save money!

A convertible seat is definitely an option. While not all convertibles fit newborn babies well, there are some great candidates! Here is our list of recommended convertibles for infants. They stay in the car and you can either wear your baby in a carrier or place them in a stroller. Most strollers on the market these days recline enough to be suitable for a floppy newborn. Some even reverse so baby faces you. It’s also a great way to get some use for that Snuzzler insert that you got at your baby shower that you learned isn’t safe in a carseat! 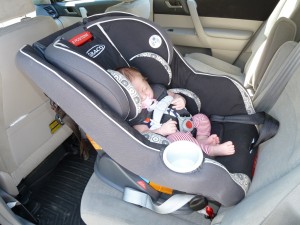 For lots of situations, an infant seat is best. Many of us just hate waking a sleeping baby. However, given the multitude of carseat options, ways to carry your baby, and tons of great strollers with full recline, the notion of NEEDING an infant carseat is definitely BUSTED.