Home
Kids
Where do they grow these kids?
Tweet Pin It 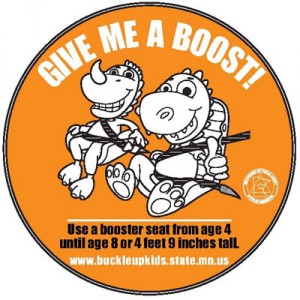 We’ve all seen it before. I’m talking about the information in pamphlets and flyers regarding kids and booster seats. Most read like this: Kids should remain in booster seats until they are at least 8 years old, unless they are 4’9″ tall.

Excuse me? I don’t know where this age 8 came from but where I live we don’t see too many kids who are almost 5 feet tall at 8 years or younger. I’m sure they’re out there but seriously, most 2nd and 3rd Graders are NOT the size of small adults. So what gives?

Honestly, I have no idea why it’s so common to see age 8 listed as the magic number when kids can graduate to the adult seatbelt. Yes, I realize that it often says “at least 8” but trust me when I say that it’s not the “at least” part that most parents remember. Most don’t even remember the 4’9″ part of the message. So where does that magic #8 come from? They sure aren’t referencing the CDC growth charts!

Maybe it’s a social change thing. We’re still getting a lot of parents used to the idea that their 6 and 7 year olds need a booster. Perhaps we’re worried that we’ll turn them off completely and they’ll think we’re all nuts if we tell them the truth. And age 8 seems like a reasonable number for most parents to ditch the booster seat, right?

Most 8 year old kids do not fit safely in the adult seatbelt of most vehicles. Sure, there are always exceptions, like some 3rd row seats which are clearly designed with smaller people in mind. But generally speaking, most kids do not actually pass the 5-Step Test until they are at least 57″ (4’9″ tall). For many kids even 57″ tall isn’t tall enough to get optimal belt fit.

So I’d like to know where they grow these huge 8 year olds that everyone seems to be talking about? Our dearly departed mascot, Marvin, would have said it sounds a little fishy.