Darren and I just got back from a fun-filled day at the Chicago Auto Show. Top on our list of things to see was the redesigned 2016 Honda Pilot, which you can read about here.

There were a lot of other vehicles to examine, though.

Redesigned Kia Sedona: This is the vehicle I was most impressed with. Darren will have a review of the 7-passenger Sedona shortly, but neither of us had seen the 8-passenger model, and there was a lot to drool over.

The styling is sleek, and the interior (at least on the higher trim models we saw) was gorgeous, with two-toned leather. It looked and felt luxurious.

The middle seat in the second row appeared to be a decent width, although the contoured bolsters of the two outboard seats mean that it doesn’t provide for a typical flat “bench,” which could potentially cause issues when installing a child restraint that doesn’t fit within the footprint of that center position.

The 8-passenger Sedona has three LATCH positions (both captains chairs, plus the third-row passenger) plus a fourth tether anchor in the center of the third row.

The absolute coolest thing about the 8-passenger Sedona, though, was the effortless system for accessing the third row. Simply turn a lever, and the seat practically moves itself out of the way. Another turn and the seat moves back into position. It is by far the easiest method I’ve ever encountered. Watch how easy!

This popular plug-in Hybrid gets a big redesign for 2016. For starters, they removed a couple hundred pounds of weight to make the car lighter, and they increased both the electrical range and the fuel milage. All good stuff.

They also added a fifth seating position to make the car more appealing to families!

Now, Chevy admits the rear center seating position has “no legroom,” and that’s not an exaggeration. The battery runs right through the center of the car, so there’s no way around that. A small boostered or forward-facing child might be okay sitting there, but a rear-facing seat is probably going to be the best option for that position.

Chevrolet’s trucks come in Single Cab, Double Cab, or Crew Cab body styles. The Double Cabs are the ones with the very small, fold-down back seats. As many people know, those can be notoriously difficult to install car seats on due to the shallowness of that fold-down seat. Chevy has come up with a solution, though: a removable headrest that can be inserted into the seat bottom, parallel to the ground, to extend the depth and make it more car-seat friendly. They didn’t have any available for us to see, but we’re intrigued by the possibility.

People asked us to take a look at the Mazda5, mainly to see if it still existed, as there were rumors it was being discontinued. It was there, so fans don’t need to fret. The 5 took some hits recently when it performed abysmally in the small overlap frontal crash test. The model at the show didn’t have crash test data listed, leading us to believe that something has changed. That could be good news for people who had been considering the 5 but were scared off by the previous crash-test results. 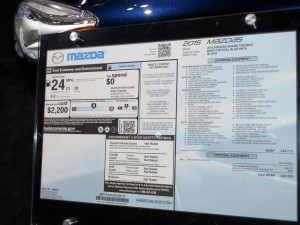 A few people asked us to take a look at this new crossover from Honda. We weren’t able to get too close to it since it was on a turntable, but it looked nice from what we could see—sort of a CR-V/Accord mashup.

This is another one people asked us to look at. This 5-seater hatchback had a generous amount of cargo room, although the back seat (at least in the leather version we saw) had funky seat

This is Hyundai’s foray into the truck-crossover market, a market that typically has not had much success. We couldn’t get a good look at the interior as the truck(ish) was up high on a turntable, but it does appear to have half-doors that presumably lead to some sort of back seat. All in all, it wasn’t the most attractive vehicle we saw all day. It reminded Darren of a Subaru Brat.

Toyota had a Sienna all decked out for the SpongeBob movie. The bright yellow van included a ship-like steering wheel, seats colored like SpongeBob characters, a bubble wand on the roof, and a flatscreen TV in the cargo area. Sorry, you can’t purchase it. 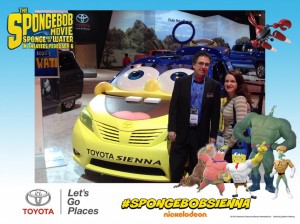 And in case you didn’t see it on our Facebook page, Darren and I got to dance with some Kia hamsters: