Can You Safely Use Those Center LATCH Anchors?

what’s best and safe with their children’s carseats: a harness that’s too loose, an installation that’s too loose, and a chest clip that’s too low. Following closely in 4th place is using the lower LATCH connectors in the center seating position of the back seat where they can’t be used. Really, any of these mistakes can be put in any order—they’re almost interchangeable given how often we see them.

Hold up, now. You mean I can’t use LATCH in the center seating position?

All passenger vehicles manufactured after September 1, 2002, have lower LATCH anchors (there are exceptions, of course). There are some vehicles that do have a specific set of lower LATCH anchors designed for use in the center position of the back seat, but most vehicles do not. That’s surprising to a large number of parents who rightly feel that the center of the back seat is the safest spot. It’s furthest from side impacts and LATCH generally is the easier method to get a tighter installation. So why is it that lower anchors aren’t available to be used in the center position and why is it that some CPS techs recommend using lower anchors in the middle while some don’t?

Lower LATCH anchors consist of 2 U-shaped metal bars welded to a sturdy bar. The anchors are spaced 280 mm apart, which to those of us not used to the metric system measures out to 11” center to center. The lower anchors are a system, designed to be used together because they are all welded together as one big piece. LATCH altogether is a system as well: Lower Anchors and Tethers for CHildren. The Tether referred to in the acronym is on a convertible or combination carseat and is generally used only for forward-facing carseats to hold the top of the carseat in place (some carseats can be tethered rear-facing—that’s a different topic). We never call lower LATCH straps “tethers” but sometimes you’ll see them referred to as “lower connector straps.” 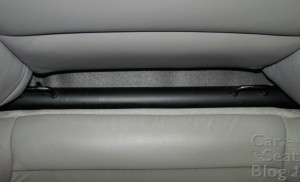 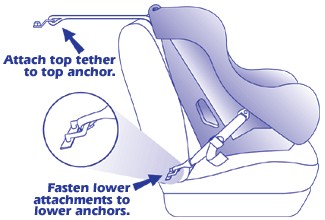 First let’s discuss the concept of “borrowing.” Just as there are a variety of vehicles with back seats, so are there a variety of configurations for lower LATCH anchors. In all 4-door sedans, there will be 2 sets of lower anchors in the outboard (outside) positions, for a total of 4 lower anchors. You can safely install 2 carseats with those lower anchors. In sedans, trucks, and SUVs with big enough back seats, there will be a third set in the middle. Aha! That’s the key—space. Even though you may have 6 total lower LATCH anchors, you may not be able to install 3 carseats using those anchors. Think about it: the LATCH anchors are spaced 11” across and the narrowest carseats are 17” across. The math simply doesn’t add up. Again, in the widest back seats, you can do it, but you have to remember that LATCH was designed to be a convenience feature; it’s not going to work in all situations. In some vehicles, there may be 5 lower anchors: 2 on each outboard side with 1 randomly stuck somewhere in the middle. What engineer was smoking what when they came up with that design? Well, in this case, you can use lower anchors in the center by using the inside lower anchor from one outboard side with that randomly placed center anchor. The carseat will have an offset installation; that is, it won’t be perfectly in the center. Here’s an example: 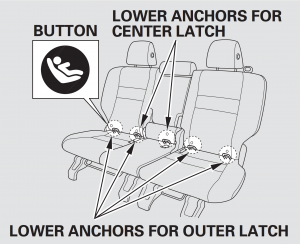 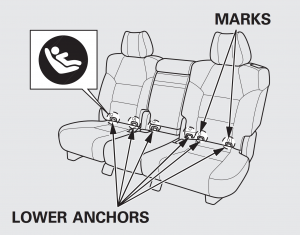 Can you use lower LATCH anchors to install your carseat in the center of the back seat if there aren’t any dedicated lower anchors in that position? Perhaps. This practice is known as LATCH anchor “borrowing” and you have to consult both your vehicle AND your carseat manual to see if they allow it. If one doesn’t, you can’t. It’s like asking mom if you can eat a piece of candy and she says no, so you ask dad. They both have to say yes. Why? Remember back to that lower anchor spacing of 11”. In a crash, forces are put on both the metal anchors (vehicle) and the plastic belt path (carseat). Because you are now using a spacing that is different than 11” (most likely more, and sometimes over 20”), the crash forces are coming at angles that either haven’t been tested for or have been tested but have failed.

Some manufacturers have tested for these contingencies and if you’re lucky enough to have a match, you can borrow those LATCH anchors. 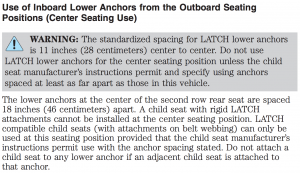 What’s a parent to do?

If you want to install your carseat in the center seating position with LATCH and your vehicle manual specifies that you have a set of dedicated lower anchors, go for it! It’ll likely be an easier installation for you. Don’t forget to check the label on the side of the carseat or the carseat manual for any LATCH weight limits, both rear- and forward-facing.

If you don’t have a set of dedicated lower anchors and want to borrow the inside anchors from the outboard positions, check both the vehicle AND carseat manuals to see if both allow it. The verbiage may be subtle (see the Graco manual excerpt), so if you’re unsure, don’t hesitate to call customer service.

Now that you know not to make the #4 mistake of borrowing lower LATCH anchors when you shouldn’t, it’s time to make sure that your child’s harness is snug enough, the chest clip is in the correct location, and the carseat is installed tightly enough. I’ve covered 2 of those mistakes in this article, so if you need a refresher on the others, take a glance at this blog: https://carseatblog.com/26763/carseatblog-quick-tip-proper-harness-tightness.