In 2011, the AAP issued a new policy statement. To summarize, it says:

All infants and toddlers should ride in a rear-facing car safety seat (CSS) until they are 2 years of age OR until they reach the highest weight or height allowed by the manufacturer of their CSS.

This wording is duplicated in their frequently updated Information for Families at HealthyChildren.org. The basis of this recommendation is primarily one study that surveyed injury data for children 0 to 23 months of age. Despite some acknowledged limitations, the study has been a benchmark in promoting rear-facing for older kids and we all applaud the results.

Other agencies, like NHTSA, have similar wording, “Keep your child rear-facing as long as possible. It’s the best way to keep him or her safe. Your child should remain in a rear-facing car seat until he or she reaches the top height or weight limit allowed by your car seat’s manufacturer.”  CarseatBlog does as well, and we encourage parents to keep their kids rear-facing to the limits of their convertible seat. Many of our Recommended Rear-Facing Carseats have sufficient rear-facing weight and/or height limits to keep the majority of children rear-facing until age 3 or 4, or even beyond in some cases. 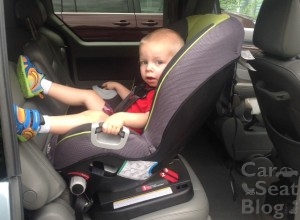 Although the messages are similar, they use slightly different wording. They all fail to specifically address child restraint instructions that permit a child to be forward-facing after one year of age. What if your child outgrows your convertible carseat’s rear-facing limits before their second birthday? Most convertibles on the market today can fit children rear-facing until at least 24 months, with some exceptions. For example, the Combi Coccoro is a great seat that fits in small spaces. However, its short shell and relatively low rear-facing weight limit make it more likely that some toddlers may outgrow it rear-facing before 24 months. Its manual states, “Toddlers 20-33 lbs., over one year of age, and who are capable of sitting upright unassisted may be forward-facing. Toddlers 33 to 40 lbs. and up to 40 inches tall MUST  be forward-facing.”  Many other carseats also have one year and 20-22 pound minimum limits for forward-facing.

Witness the chart from NHTSA:

As you can see from the chart, it is not prohibited to have a child ride forward-facing after age 1. To my knowledge, no auto manufacturer or major traffic safety agency in USA or Canada prohibits using a carseat as permitted by its instruction manual. Provided that the child is correctly restrained within the limits stated on the labels or in the manual, their carseat will still be very effective in reducing injuries. There is no doubt, based on both crash physics and real world data, that rear-facing is safest for babies, toddlers and kids of all ages if an appropriate restraint system can be used. With that said, there is some misinformation on this topic that we’d like to address:

While rear-facing limits are certainly important, they are only one aspect of finding the “best” carseat. The “best” carseat is one that fits the child and vehicle properly, and is easy to use correctly on each and every trip.  These factors are the critical ones for most parents when considering the purchase of a new carseat.

What does this all mean for parents and advocates?  Stay tuned for Part II tomorrow!