The updated ratings on convertible carseats are published and the results are going to make some people happy and others not so happy. There’s just no way around that. Parents who already own top-rated convertible seats are going to be happy while those that own seats at the bottom of the lists may be less-than-pleased. Some may even question whether they made a mistake buying “X” carseat instead of “Y” carseat.

Before we get to the CR top rated picks, let’s talk about what the “BEST” convertible carseat is. We say this all the time as Child Passenger Safety Technicians, but it’s the truth, hence why it’s repeated so often. The BEST carseat is the one that fits your vehicle (installs tightly), fits your child (is appropriate for their age/weight/height), and that you can use correctly on every single ride. And of course it needs to fit your wallet too. The best carseat is not necessarily the most expensive carseat you can (or can’t) afford. And it’s not necessarily the carseat that matches the rest of your nursery collection or the one that everyone raves about online.

While we think our Recommended Carseats list is a great place to start, the seats on our list aren’t going to work for everyone and every situation. Remember – what works best for *your* child in *your* vehicle might not be the best choice for your sister or your neighbor or your friend, and that’s important. For example, a loosely installed carseat or one where you can’t easily adjust the harness to be snug on your child is not safe. A convertible carseat that doesn’t fit rear-facing in your car is not going to be the best choice for your child either.

It’s important to point out that this round of ratings is based on crash test results using their previous testing methodology (30 mph, FMVSS 213 standard bench, testing with 3-point lap/shoulder seatbelt or LATCH and no blocker plate). Convertible seat testing with their new crash test methodology is underway, but those results will not be published until some time early next year. For more info on Consumer Reports’ new crash testing program please see our previous blog on the subject:

Currently CR evaluates carseats on several points, including fit-to-vehicle, ease-of-usage, price and crash test performance. We can’t comment on specific scores but after our meeting with CR last year, we do have a general idea of how their ratings are assigned within these categories.

They brake down the convertible carseat ratings into 3 categories:

In the up to 40 lbs. category, the Cosco Scenera, Scenera 40RF, Cosco Apt 40RF and Safety 1st onSide Air were their top rated picks. I don’t think the Scenera 40 RF is still being made or sold anywhere but the “regular” Cosco Scenera, the Cosco Apt 40RF and the Safety 1st onSide Air are all widely available and they are all budget-friendly seats (under $100) too. Just don’t expect them to fit your child for as long as larger competitors. These are basic, budget-friendly seats for infants and toddlers that should last many kids until at least age 3 and some to age 4. They also make great travel seats. 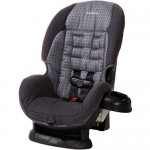 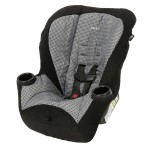 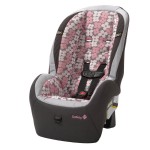 In the over 40 lbs. category, the Chicco NextFit is the top rated convertible seat followed closely by the entire Britax convertible lineup – Britax Advocate G4, Britax Boulevard G4, Britax Pavilion G4, Britax Marathon G4 and Britax Roundabout G4. The Britax Roundabout G4 and the Evenflo SureRide were rated as “Best Buys” because they offer good value for their price but they also received good scores in all categories. 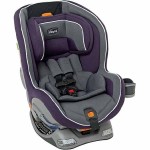 In the “All-in-One” category – the Evenflo Symphony was the top rated seat among the 5 models tested. 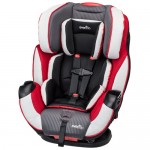 You can find their newest ratings on convertible seats at their website, www.consumerreports.org. Unfortunately, you have to be a paid subscriber to see the full ratings report.