It’s got a new name and a new available powertrain, but remains one of the best family haulers for your kids.  We previously looked at the Infinity QX60 a couple years ago in our 2013 Infiniti JX35 Review.  Though it has a new moniker, the vehicle is essentially the same.  Our comments from the previous review mostly apply to the current version as well.  So, this quick review will focus on the new hybrid powertrain and briefly cover some carseat related features.  We also have a review of the very similar 2013 Nissan Pathfinder. It offers all the interior flexibility for kids, without many of the luxury-class frills. and without the luxury-class price tag!

That shouldn’t be difficult to match with a few changes to your driving habits.  You can find some great articles online about maximizing hybrid fuel economy, or “hypermiling.”  Some of these may seem extreme for typical drivers, so I’ll simply give some key things to avoid in order to exceed those EPA estimates:

In comparison, the fuel economy is not as good as the 2014-2015 Toyota Highlander Hybrid I recently reviewed.  On paper, it’s only a bit short of the 27 mpg city and 28 mpg combined EPA ratings of the AWD Highlander Hybrid.  In practice, I found it much more difficult to exceed those ratings than I did with the Highlander in good conditions.  Infiniti’s hybrid system is simply not as robust and does not allow you to keep the internal combustion engine off for nearly the length of time as the Toyota system does in a wider variety of conditions.  For example, I was frustrated that sometimes the QX60’s system would keep the engine going for extended periods at stops, even with the engine warm, transmission in Park and climate control off.  Meanwhile, the Highlander Hybrid would have shut the engine off long before, as I started to coast or brake for a stop.

The QX60 won’t fool you into thinking it’s a driver’s vehicle.   It’s certainly an improvement over the full size truck-based SUVs, but it still feels mighty big behind the wheel and reminds you every time you have a turn.  On the plus side, it’s a comfortable cruiser for a long road trip, for sure.  It’s relatively quiet, too.  My only issue is that while the front seats are supportive, they are also a little too firm for my preference.  The transmission was smooth, but often had a power lag at starts and wasn’t as quiet or responsive as the one in the Toyota Highlander Hybrid I recently reviewed.  Visibility was average, especially over the hood where it can make simple turns around curbs more difficult than necessary.  The AroundView monitor is one of the best on the market.  It could be a little brighter and clearer, though.

We tried various seats with no particular difficulties.  As with all midsize SUVs, the 2nd row middle seat is relatively narrow and will not be compatible with all carseats, especially in a 3-across installation.  There are two LATCH seating positions in the outboard seats in the 2nd row, plus an additional top-tether anchor in the middle of the second row and on the passenger side of the third row seat.  A couple sample images of the Graco 4Ever 4-in-one (below, left) and the Clek Oobr and Recaro Performance Sport (below, right). 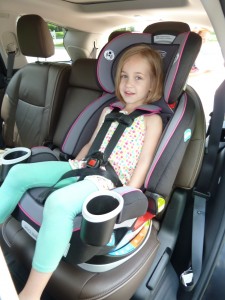 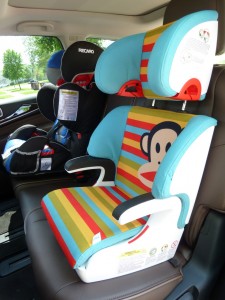 While its fuel economy is impressive for the midsize crossover world, the Infiniti QX60 Hybrid and Nissan Pathfinder Hybrid are definitely “mild” or “lite” hybrid systems.   While the Pathfinder Hybrid is a relative bargain in a 7-passenger hybrid vehicle, the QX60 Hybrid AWD with the Technology Package (also requires Premium Package) will cost you $58,145 MSRP.  In comparison, you can get all the safety goodies in the Toyota Highlander Hybrid AWD Limited with Technology Package for $49,560 MSRP.   You’ll get better fuel economy and improved towing capability for about $8,500 less, while keeping the luxury appointments.  For those concerned with safety, its chief rival is perhaps the excellent 2014 Acura MDX with Advance Package that carries a similar price tag but makes a big sacrifice at the pump.

Overall, the QX60 is a very solid and refined luxury class crossover.   A roomy interior, flexible seating for 7-passengers and easy 3rd row access are among its strengths.  A quiet and comfortable ride offset somewhat lackluster handling and power delivery for the class.  Families should be able to find combinations of carseats that work next to each other or in a 3-across setup in the second row, and there’s an extra top tether anchor in the third row as well.

Thank you to Infiniti USA for providing the QX60 Hybrid AWD (MSRP $60, 780 with $995 destination fee) with Roof Rails, Theater Package, Deluxe Technology Package and Hybrid Premium package that was used in this review.  No other compensation was provided and all opinions are our own.