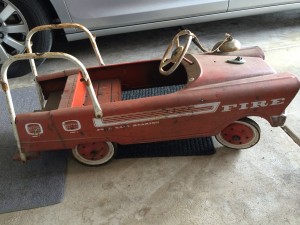 Recently I’ve been spending an inordinate amount of time watching instructional videos from the 1940s and 1950s. I’ve learned skills such as how to settle conflicts, how to be popular, and how to ask someone out on a date (which I can’t do, since I’m not male). Videos like these rank high on the nostalgia scale, but by today’s standards most of them are quaint and a bit silly, and sometimes even offensive.

Apparently in the 1950s, elementary schools in Phoenix decided to start driver’s education early. Really early. This video shows kindergarteners playing a musical-chairs-type game while holding cardboard steering wheels. As the years progress, they receive more instruction until they’re able to drive Power Wheels-esque (but way cooler) vehicles in a little “town,” and get traffic citations for breaking the rules.

Today there are bike rodeos and “safety towns” that teach similar concepts for cycling, but parents usually have to pursue these on their own, and they’re typically a one-time thing, not a curriculum that’s reinforced throughout several years of school.

The best part of this video is the “Attitude Court” that teens had to attend to earn back a suspended license. In addition to covering citizenship issues, the Attitude School held scientific demonstrations explaining aspects of safe driving. The attendees had to pass written tests and participate in a ride-along with a police officer before their licenses would be returned.

Yes, there is the standard cringe-inducing lack of seatbelts, but such was the era. We can’t expect them to have gotten everything right. But did I mention the film is narrated by Jimmy Stewart?

Take a few minutes and watch this, then go teach your kids hand signals if they don’t already know them.