Looking for a smart, economical vehicle that doesn’t say “Prius” on it?  Something that has a reasonably well-designed back seat for kids and carseats?  If so, the Ford C-Max should definitely be on your short list!  For 2014, you can expect slightly better fuel economy, thanks to improvements in the powertrain and aerodynamics.  Even so, because of some issues with the EPA ratings, the new labels will indicate a decrease to 45 mpg city, 40 mpg highway and 43 mpg overall.  For those familiar with driving a Prius or other hybrid, this drop may not be a disappointment in real world driving.  For example, I achieved just over the EPA ratings of 47 mpg around town for a 2013 model with some basic hybrid driving techniques; slightly better than the Prius V I tested in similar conditions.

The 2nd row of the C-Max is one of the better setups I’ve seen in a compact vehicle.  The lower LATCH anchors are easy to find.  The seatbelts and LATCH anchors don’t overlap.  The buckles are not too short, such that they are difficult for kids in boosters to buckle themselves like in a Prius.  All head restraints can be removed if necessary to fit a taller carseat.  The middle seat, while narrow, can still manage a 3-across with careful selection.  Overall, it’s slightly wider and much nicer than the standard Prius in terms of fitting kids and carseats.

Perhaps the only major downside is that there is not a lot of legroom back there, like any compact car.  It’s about the same as the standard Prius, but the seat cushions seem lower to the floor.  So, adults may find it a bit cramped in back.  If that’s an issue, the roomier Toyota Prius V does offer adjustable 2nd row seats that are more comfortable for older passengers in terms of legroom and also space for a rear-facing carseat.

The C-Max comes only in a 5-door hatchback, which is great if you want to fit a stroller and some groceries.  The only oddity is that the top tether anchors are fabric loops on the back of the seat, NOT to be confused with the sturdy-looking metal cargo hooks on the floor!  Fabric loops are perfectly fine, just something to note when you are looking for metal anchors.  As for the hatch, the optional power assist feature is great.  My son liked being able to open the lift gate. 🙂

As mentioned, the 2nd row setup of seatbelts and LATCH is very intuitive.  Ford is also to be commended for allowing the top tether system to be used up to the maximum limit indicated by the child safety seat manufacturer.

Below, left, I tested a Britax Advocate convertible carseat.  Installed rear-facing, it left adequate legroom for a 5’10” driver in front.  With a Recaro ProSport combination seat on the other side, a small adult or narrow booster would still have room in the center seat.  The same applies to the Cosco Scenera and Graco Nautilus I tested, below, right.  Finally, at the bottom, you can see the locations for attaching a front-facing (left) and rear-facing (right) tether system.  Please note that only a few manufacturers allow tethers to be used rear-facing, including Britax as shown. 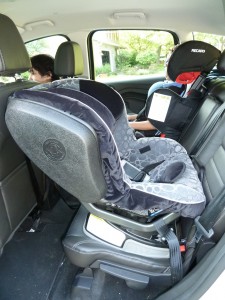 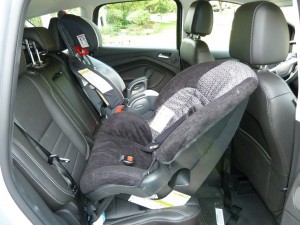 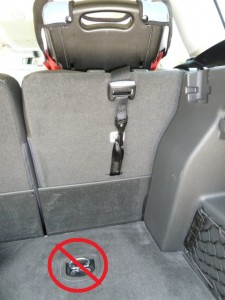 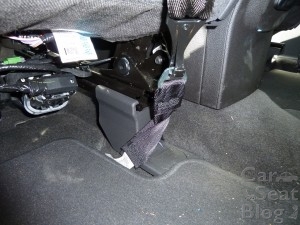 Did I mention the C-Max is fun to drive?  Unlike the Prius and Prius V, it actually accelerates.  Of course, pushing it to the limits frequently is why so many people found C-Max’s fuel economy to lag the EPA estimates!  The handling is much better than Prius, too.  Dare I say….sporty?  Yes.  I did it.  Not bad at all for such a fuel efficient car!  And, it’s quieter and more comfortable than Prius and Prius V, too.

I really enjoyed my time with the C-Max.  We’ve driven a Toyota Prius for a few years now and we are fans, but I’d take a C-Max for a swap in an instant.  The fuel economy isn’t quite as good as Prius, but I like almost every other aspect of the C-Max better.  There’s no question that the C-Max will be a little easier for kids and carseats compared to the Prius, making it the better family hauler.  The C-Max is not quite as roomy as the Prius V or the Ford Fusion Hybrid, for those seeking even more room.  The C-Max SE is a decent value as well, especially compared to the Prius V.

I wouldn’t be concerned about the “downgrade” to 43 mpg overall for 2014, or with comments about unattainable fuel economy ratings from reviewers who aren’t familiar with driving hybrids.  Many drive them like normal cars.  Petal to the metal when the light turns green.  Tailgate the driver in front for a quarter mile.  Brake hard for the next red light.  Rinse.  Repeat.  For most city and suburban drivers, you will easily exceed that 43 mpg with a few hybrid driving techniques.  As with most hybrids, cold winter months will cut fuel economy significantly, but for the rest of the year you will meet and likely exceed the EPA estimates and the C-Max is no exception!