This week we welcome Debbie (Defrost) for Guest Wednesday.

No one wants to hear that their new carseat will not install correctly in their vehicle.  Carseat techs tremble at the very thought of having to tell a parent that the carseat they are so pleased with and proud of – that they found for such a great deal, and that matches their car interior perfectly! – simply will not install safely in their vehicle.  For many parents, it seems like a ridiculous concept – “Incompatible?  What, are they getting married?”

Well, in a way, they are.  They are going to be joined for several years, side-by-side, day after day, working together, eating together, sleeping together.  Just like a human marriage, it’s important that they get along really well in order for it work!

Regardless of how much time and effort a parent puts into choosing a carseat, they are usually happy just to have that step over and done with.  They’ve researched, they’ve read the reviews, they’ve shopped all over town and/or the internet, they’ve convinced their partner of the outstanding benefits of their particular choice, and now they just want to get the thing installed so they can be on their way.  Even if they weren’t able to put that level of time and effort into their decision, they’ve still invested money into it, and sometimes no longer have the packaging or receipts to return the carseat.  It’s no wonder it’s so frustrating.

The most well-publicized incompatibility is a rear-facing carseat in front of an airbag.  Most parents already know about the dangers of such installations.

Other obvious incompatibilities are, fortunately, not very common in newer vehicles.  Seat belts that attach to the vehicle door, are motor-driven, or vehicle seats which face sideways or towards the rear of the vehicle are usually found in older models, and they are almost always incompatible with all carseats or boosters.  These restrictions, as well as others, are listed near the front of all carseat manuals and are easy to identify.

The real frustration is when you get a carseat that can usually be installed easily in most vehicles, combined with a vehicle that has previously had no issues with other carseats – and they simply won’t work together.

So, how can you avoid the frustration and hassle of ending up with a carseat that refuses to play nice with your car?  While there are never any guarantees, you can take steps to minimize the possibility.

Step 1: Know Your Vehicle.  You need to know the year, make, and model, and have an owner’s manual so you can read the section about installing carseats.  Some manufacturers have manuals available online for owners, some charge for this service, and for others you’ll have to order a manual through the dealer.

Step 2: Know Your Carseat.  If at all possible, read the manual before you buy the carseat – most manufacturers have their manuals available online.  Display models might have the manual stored on the back of the seat, or a salesperson might be willing to open a box so you can read the manual.

Step 3: Communicate.  Talk to people who have the same type of car you have.  Talk to people who have the same kind of carseat you’re considering.  Talk to a carseat tech.  Keep in mind that the answers you get will probably not be definite; for example, it’s not likely that someone who has the same car as you also has the same carseat you’re considering, or they may believe they had an incompatibility when in reality the carseat was incorrectly installed (remember, 9 out of 10 carseats are not installed correctly!)  Even a carseat tech who has installed hundreds of carseats may not have encountered the specific situation you will have.

Step 4: Try It Out.  If at all possible, find a carseat that’s as close to identical as possible as the one you’re considering, and try it out in your vehicle.  Many stores will allow you to try out their display model in your vehicle before buying, either by asking you to leave your driver’s license with them, or by having a salesperson accompany you to the parking lot.  You may also be able to find a parent in your area who has the carseat you’re considering, and borrow their carseat for a trial install.

Step 5: Find a Tech.  Even if the carseat seems incompatible with your vehicle, it’s possible a carseat tech will have suggestions that will fix the problem.  Carseat techs are like marriage counselors in that way.

The important thing to remember is that carseat and vehicle compatibility is never guaranteed.  Aside from the obvious incompatibilities like rear-facing seats in front of airbags, or seat belts that can’t be used with any carseat, you can’t say for sure whether a carseat is compatible with any particular vehicle until you try it.  When you purchase a carseat, make sure the store has a good return policy, save the box, don’t remove the tags, and keep your receipt until you’re certain it’s compatible with your vehicle.  Most of all – don’t get too attached! 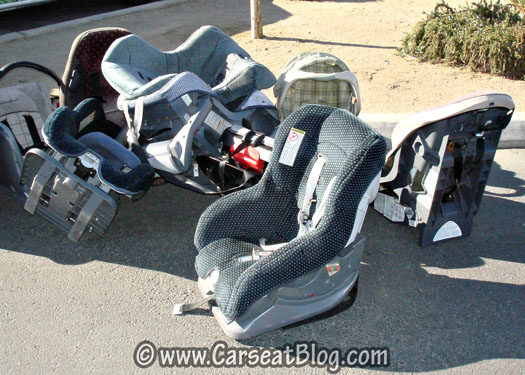