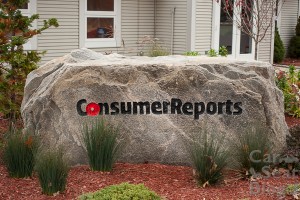 On a bright sunny day in September, there we were, minding our own business as we went about updating our Recommended Seats page when Kecia decided we needed to take a look at the Consumer Reports ratings to see how our choices compared to theirs. As we looked at their ratings, we noticed some discrepancies in their rating system—which we’ve noticed in the past—and we called them out on it in a blog post. One thing led to another, which led to an invitation to their testing facility in Connecticut. We’ve gotten an invitation to visit before but the timing has never been right for us. This invitation was a little more . . . firm, but in a friendly way, like “C’mon now, you’ve got to come visit us!” I have to say a visit to this testing facility has been on my list of things to do for a LONG time, so Kecia and I were able to squeeze some time in our schedules to get there. Finally!

Upon our arrival at the 327-acre testing facility, we were giddy at the sound of a car on the track screeching through curves and circles. The small parking lot was full of relatively new cars, some parked in spots marking them for sale. When we walked inside, everyone in the small building was waiting for us and greeted us warmly. Kecia and I weren’t sure if others would be attending with us that day, but it was soon clear then that the CR folks had set aside an entire day just for us and we were deeply grateful. I’d love to reciprocate, but my facility is pretty simple: a couch in front of a TV with a remote. Oh, and two cute furry mutts that occasionally nudge me.

After introductions and a tour of the main building, we went to where the real work is done: where they keep the vehicles in which they install the carseats they rate. It’s a rather warehouse-type building with a couple of garage doors on 2 sides to get the vehicles in and out and it’s lined on one side with offices. On one end is storage for all the carseats they’ve tested and because that’s not nearly enough storage (is it ever?), the storage runs along the top of the offices. It’s not a drab building at all and very comfortable to be in.

Now for a little background on CR vehicle testing. They’ve been doing vehicle dynamic crash tests since 1972 and auto testing since 1936. That’s quite a history! Each vehicle undergoes 50 tests and evaluations, which eventually leads to the ratings we see in the yearly comprehensive April auto issue and monthly issues where they review vehicles.

But what about CR’s carseat testing? Isn’t that why we went? Sure! We’ve wanted to know for years what’s behind those circles, formally known as “blobs” around CR, lol (and that term is probably trademarked 😉 ). CR employs 3 highly qualified individuals, who are also certified as child passenger safety technicians  (no, we didn’t ask to see their cards 😛 ). For each carseat they evaluate, they use standardized forms to keep track of how they score the seat using a point-based system. They cover ease of use features, such as harness adjustment, seat belt lockoffs, and harness height adjustment. Each carseat is evaluated based on installation in four 2008 vehicles (Honda Accord, Chevy Aveo, Jeep Liberty, Chrysler Town & Country) and a 2009 Honda Pilot. These vehicles represent many family vehicle types in which carseats will be installed and also present common installation problems so they feel they can get representative installs in them. Deductions in points are taken for things like having to make buckle twists (carseat belt path could be redesigned to eliminate need for twists), needing to remove vehicle head restraints to get the carseat to fit (referencing carseat design on taller seats), and so on. CR gives a numerical value to all of the crash data. Crash protection represents HIC, chest acceleration, and head and knee excursion values measured from their own crash performance tests.

The overall score is calculated by taking the weighted average of crash protection, ease of use, and fit to vehicle. They were unable to share the exact weights but they did indicate that the ease of use and fit-to-vehicle ratings matter most in the overall score calculations. Let’s say CR assigns a number value ranging from 1 to 5 to each category: crash protection, ease of use, and fit to vehicle. 5= excellent, 4=very good, 3=good, 2=fair and 1=poor. Because CR feels ease of use and fit to vehicle are very important to proper use of carseats, and therefore overall better protection for the child in the seat, the scores in those two categories count more heavily. For instance, let’s say we have 2 carseats to compare, carseat A and carseat B. When people try and average them traditionally the math doesn’t always work out as they would score a 3.67 and 4.3 overall if done that way. In truth a seat like Seat “A” below that excels in crash protection but is not as good for ease-of-use and fit-to-vehicle results in a lower overall score. Seat “B” conversely doesn’t do as well in crash protection but its score is boosted by its easy to use features and installation. Also, if CR finds a seat that performs poorly enough during crash testing to compromise its ability to protect a child, its rating will reflect that appropriately as we have seen in the past.

For booster testing, we got to meet a lovely young 6 yr old named Beatrice. At first, Kecia and I couldn’t figure out why they wheeled her out on a dial-a-belt seat (that’s a vehicle seat we use in tech classes that has a bunch of different seat belts for those of you who haven’t seen one before). Then I picked her up. Yep, nearly 52 lbs. of dead weight. My 11 yr old, who weighs 67 lbs. is much easier to pick up, but that’s because she provides a little jump, unlike the dummy. When they test a booster with Beatrice, they move her 20˚ forward and 15˚ to each side to simulate what a child might do in the vehicle. This helps them to identify problems like the shoulder belt catching in the belt guide, unlike the IIHS belt fit test, which strictly looks at a static fit. 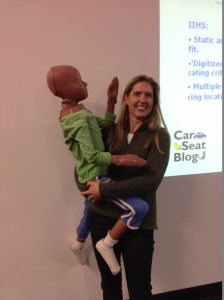 Kecia and I chose a day in early November to beat the winter weather, but that didn’t stop the rain from falling the day we visited. To finish up our visit, one of our hosts took us out in the pouring rain in a brand new Porsche Panamera for a professional drive on the test track—an unexpected special treat! We took off down the straightaway hitting speeds close to 100 mph, spun around the circle feeling the centrifigual force on our bodies, slid sideways, and generally felt carsick after the ride. But it was fabulous! 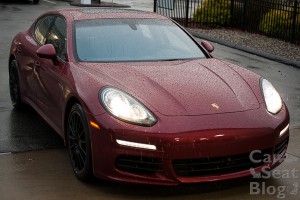 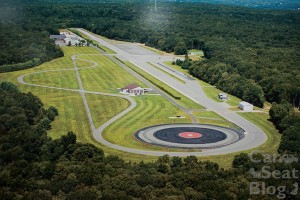