We are in the midst of CPS Week 2013 culminating on Saturday with Seat Check Saturday. To celebrate, because really, we CPS techs like to party believe it or not 😉 , Safe Kids Worldwide released the results of a study with some very shocking findings.

We know that vehicle crashes are leading killers of kids; for kids 5 and older, it’s the leading cause of death (see graphs pulled from the WISQARS national database on injury-related data). After reading the study released by Safe Kids Worldwide, we now understand a little bit more why they may be dying in the numbers we’re seeing and it’s truly shocking. We should be ashamed. 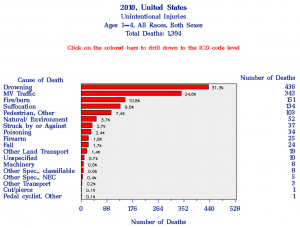 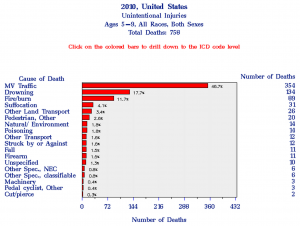 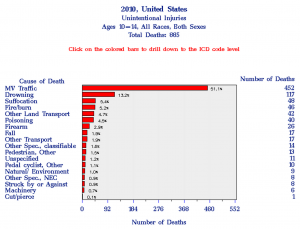 1002 parents and caregivers of children aged 10 and under were surveyed online as to their buckling practices and the results were disappointing. Twenty-four percent of parents (for brevity, I’m leaving off the word “caregiver,” but they’re included as well) have at one time or another not restrained their children. There weren’t a lot of differences in gender (no blaming the hubby here!), but

there was an interesting difference in education level. It turns out that those with the most education, such as a graduate degree, were more likely to say it was acceptable for a child to ride unrestrained than parents with a high school or college-level education. What the? Maybe now the whole pediatrician giving out bad advice thing is starting to make sense.

Along with rise in education, as income rises, so does the apparent acceptability for not restraining children. The excuses range from “I’m not driving far” to “rewarding the child” to child “keeps climbing out.” Perhaps when child passenger safety technicians

comment on parents’ carseat practices, we are actually commenting on their parenting abilities because like it or not, “rewarding a child” and not buckling a child because they “keep climbing out” is pretty poor parenting. In the past, I’ve always sworn up and down that I’m not commenting on a parent’s child-rearing abilities when I tell them that they aren’t tightening the harness enough, but damn, if you’re not buckling Billy because he got an A on his spelling test, I do have to question your parenting skills. Billy may not live to see his next spelling test because of that reward. Give him a hug instead, which he’ll appreciate a lot better.

For kids under age 12 who were killed in vehicle crashes in 2011, fully 1/3 were unrestrained. These are preventable deaths. Certainly there are crashes so severe that they are unsurvivable, but let’s at least give these kids a fighting chance. As children grow older, they are more likely to be unrestrained. Parents understand that babies need to be restrained properly, but that’s not carrying over to older children. Perhaps it’s the ease of use of infant seats that can be buckled in the house vs. in the vehicle, perhaps it’s the fast pace of American life where we spend so much time running from one activity to another with a cell phone plastered to our ears (let’s not get started on *that* one, shall we?), perhaps it’s thinking that older children should be able to buckle themselves when they really can’t due to dexterity or maturity issues—whatever it is, we should take the time to always ALWAYS buckle everyone in the vehicle, even if driving from one store to another in the same parking lot. It only takes a minor crash to cause a giant catastrophe that can change your life forever. 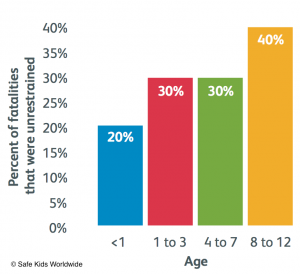 To make sure that your carseat or belt-positioning booster seat is being used properly, please take advantage of Seat Check Saturday this Saturday, September 21. Because it’s a special day, there should be more events planned than usual, so it should be easier to find one in your area. Nationally, it’s said that 80% of carseats are installed or used incorrectly, but I know that in my city, that number is 96%. That’s scary! So take advantage of FREE events! We’re here to help you install and use your carseats—we want to help and we want to make sure that everyone in your vehicle is safe. It’s what we do.

Thank you to Safe Kids Worldwide for permission to use charts and graphics!