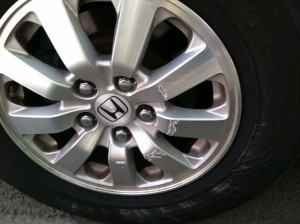 A couple times now, I’ve mentioned that I’m not very good at parking. That might be an understatement. I’m really bad at it.

Regular parking spaces, angled parking spaces, parallel parking, even spaces that simply require me to pull straight ahead…I always wind up lopsided or over the lines. I’m a great driver, but when it comes to low speed maneuvering, apparently I have some kind of deficiency.

But the other day, I hit a new low. Literally.

I drove into Chicago to meet someone for lunch. There were street-sweeping restrictions in the neighborhood that day, so I could only park on one half of the street, but those spaces were already taken. (I would have considered taking my chances parking on the street-sweeping side, but the couple cars over there had boots, so I figured it was better not to risk it.)

After driving around for 15 minutes, I finally saw a space. It was along a curb, with a car in front and an alley in back, so I had room to pull in without needing to parallel park. Perfect! I pulled up and realised I was hanging slightly into the bike lane, so I backed up and turned closer to the curb a bit, then pulled forward…and heard a terrible scraping sound and realized I was stuck.

I got out and surveyed the scene. On a normal curb, my tire would have bumped, but this was a really really tall curb, and my wheels were jammed. Panic set in as I tried to figure out how I’d get home and how we would unstick the car.

I got back in and tried a few more times. I realized that by turning the steering wheel lightly, I could move a fraction of an inch in either direction. So I sat there, slowly rocking my car out of the space and praying that no one was filming it for YouTube. At one point, I noticed a AAA tow truck emerging from the alley behind me and was about to flag it down, but it turned the other way. I continued to maneuver the car inch by inch until I had finally freed myself.

I texted my husband to tell him I ruined our hubcaps. He wrote back, “We don’t have hubcaps.”

I said, “Well maybe we should. In that case, I ruined the round metal things in the middle of the tires.”

I hoped it would “just buff out,” but Hubby says no. So I broke our car, but at least it appears to be cosmetic.