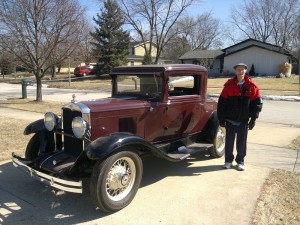 My dad and I didn’t have a whole lot in common. He traveled during the week and sold equipment to railroads, while I’m at home every day doing internet publishing and child passenger safety work.  He was always puttering outside or in the garage, I am usually inside on the computer.  He liked westerns, I like sci-fi.  He liked country music, I like rock/pop.  He drank Genuine Draft, I prefer Guinness.  He was more of a “farm boy”, I am definitely more “city”.

In talking to one of my sisters recently, I realized that he did impart at least one common interest to me.  Cars.  Turns out, we all had childhood memories of helping him grease the points or do an oil change.  To this day, I still put my cars on ramps to do an oil change, a hassle I’d probably never consider if it wasn’t for my dad.   My passion happens to be new cars and keeping kids safe in cars, while his favorite pastime was restoring antique cars.  So, perhaps it is not surprising where my interest originated, especially considering how different a path it is than high power electronics design, my career before this one.

So where is this going? In honor of dad, who would have been 78 today, I decided I was going to splurge on a safer, new set of tires for my car.  Something he would certainly appreciate!  My old ones were Toyota’s crummy OEM tires, but still in pretty good condition, so I hadn’t been able to justify replacing them.

Weird thing, while I was at the shop having the new treads installed, I was passing the time talking to Kecia about upcoming blogs on the phone.  I happened to learn that her car was in the shop at the exact same time last Monday morning, also for a new set of Michelin tires.  What are the odds of that?

Maybe we can chalk it up to like minds thinking alike.  Maybe it was simple cosmic coincidence.  Tires are perhaps one of the most important and also most overlooked safety features on a car.  I’m sure Kecia is glad she got her new tires with all the rain New York state is getting (safe wishes to anyone else affected by frankenstorm Sandy this week)!  So, anyone else put on a new set of rubber recently?