What can I say?  It’s a great seat that has been improved with a couple minor updates.  This quick review will not be as detailed as many of our reviews, because the G3 series models are nearly identical to the previous models.  Please read our current reviews of the Pavilion 70-G3, Advocate 70 (and Boulevard 70), Marathon 70 (Part I, Part II and Part III) and Roundabout 55.  So, yeah, we’ve covered them pretty well and for good reason.  While they may not have the very highest weight or height limits around, they do tend to be very easy to install and to use, compared to many other products.  They also tend to be very compatible with most vehicles, and can even fit rear-facing where some other models won’t.

Here is a list of the current Britax G3 convertibles.  Pricing is as of Nov, 2012, and includes free shipping and returns from Amazon.com .  Please see our review of the newer Britax Marathon, Britax Boulevard and Britax Advocate G4 review as well!

First, the EZ-Buckle System.  Most of us have encountered the annoyance of putting a child into a carseat and then having to dig around under them to fish out the buckle.  This simple improvement causes the buckle to flip forward every time the child gets out of the seat, so that it is *RIGHT THERE* the next time they climb in.  Couldn’t be simpler!  This feature is on all of the new Britax G3 models, but not on the Roundabout 55.

Next, the new HUGS pads with SafeCell Technology.  It’s not really the same as the SafeCell tech they put in the base of the shell, but the pads are now thicker and designed to absorb more energy in a crash.  The only catch here is that these new HUGS pads are tethered to the shell, restricting their movement down the straps to some extent.  That also means that for those familiar with Britax convertibles, you can no longer easily loosen the straps by grabbing the HUGS pads or putting your hand behind the HUGS pads to loosen.  Instead, you must use your fingers and pull on the straps themselves to loosen them.  Not a big deal, but it is a little different than what you are used to doing now.  These new HUGS pads appear on the Boulveard 70 G3, Pavilion 70 G3 and Advocate 70 G3.

There are a couple other minor updates as well.

The versa-tether system now has an energy absorbing feature built-in.  Presumably, this will slightly reduce the forces on a child in a crash.  Also, on the Advocate model, the innovative side impact cushions are now black, rather than grey.  As for value, a few other convertibles may be bigger, but you can see here that the Advocate 70 G3 will fit some kids up to age seven.  My son turned 7 a couple months prior to the photo (right).  He is about 57 pounds and 52″ tall and was right at the limit of the Advocate by height at the shoulders.  Even so, the shoulder room is limited for kids that big and there is also a standing 49″ height limit listed in the manual.  Given that he is 75th percentile for height and weight, I expect most kids will make it to at least 6 years and 50 pounds before outgrowing this seat, some longer.

Don’t forget the new Britax carseat accessories (sold separately)!  Below on the left you can see the Advocate 70 G3 with the optional Britax Vehicle Seat Protector.  It’s thin and flexible and works well to protect the seat cushion and contain small spills, too!  The boy is 3.5 years old, weighs 31 pounds and is about 37.5 inches tall.  On the right, you can see the torso portion of optional Britax Head and Body Support Pillow.  It gives a little more comfort and support for babies and smaller kids.  This 2.5 year old girl has just about outgrown the accessory torso pillow; she weighs 26 pounds and is around 35″ inches tall.  There is also a head pillow included, but it is not used on seats like the Advocate that have True Side Impact Protection.  Instead, the head support would be more appropriate for the Marathon 70 G3 and B-Safe infant seats. 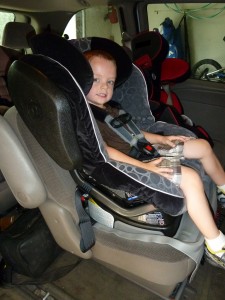 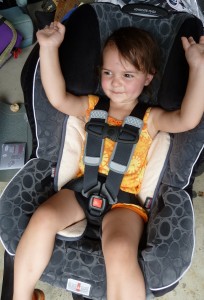 That’s it!  There’s really not much to complain about with these updates, except that the harness is not as easy to loosen as it was on the previous version.   It is also still compatible with the Britax Infant Positioning Insert for use with small baby or larger newborn, just be careful when you install and remove it, to avoid tears in the foam.

Key Advantages of the Advocate 70 G3:

Without a doubt, we will be updating our Recommended Carseats list to include one or more of the new G3 models.  If you have the width to fit the Advocate 70 G3 and will be using it in an outboard seating position, I highly recommend it.  If you have limited width or plan to install in the center seat, then you might save a few bucks and opt for the Pavilion 70 G3 (with the Click & Safe Feature) or Boulevard 70 G3 (without Click & Safe) instead. 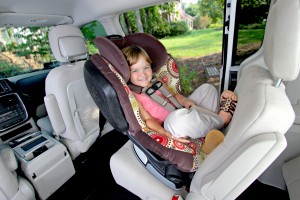 You can find information from Britax on the Advocate 70 G3 here.  Thank you to Britax USA for providing the sample used in this review.  No other compensation was provided and the opinions in this blog are solely those of CarseatBlog!