It’s another summer day. I roll out of bed sometime well after my 8a alarm goes off (set because, you know, I’ve planned to get up

early and actually accomplish something), mutter some general words of acknowledgement to my 12 year old who has no doubt been on his computer since 6a, notice that my 10 year old dd is nowhere to be found—must still be lying in bed, taking after her mama, lol. After I’m attacked by my little mutt who is desperate to see me after a long night away from me, her favorite person, I make my way downstairs to gag down some breakfast and read the newspaper. The rest of the day follows in similar lazy fashion. That’s a typical summer day. But today was different! We had a purpose today!

I had a meeting this morning, so before I left, I told my ds that after lunch, we were heading out for a Big Adventure. He’s the type that needs plenty of warning and lots of coercion to do even fun activities—takes after his dad, sigh. When I returned, we had to eat a quick lunch due to scheduling beyond my control. The kids were not happy. This did not follow our carefree, eat-when-we’re-hungry summer schedule. In order to get out of the house on time, I had to bribe the kids with stale gum. Whatever it takes, eh?

Can you guess where we were going?

I was pleasantly surprised by the ride. The bus was perfectly on time. It was clean. It didn’t have any odors. It wasn’t too hot and was pleasantly air conditioned. The bus driver was friendly and joked with my kids and me as we boarded. The other riders weren’t scary. It was everything I wasn’t expecting!

Our grand adventure took about 50 minutes and, despite being an “airport express,” included several stops downtown to pick up passengers. My dh saw our bus as we drove near his building and texted “There you go” and “Bye” as we passed. I saw how the driver secured a wheelchair passenger and my kids saw the passenger sleep soundly as we drove around the city. So, for $6, we had a Grand Adventure to the airport and I didn’t have to worry about traffic at all.

OK, I know you’re dying here—what did we pick up at the airport? ‘Cause this sounds like a one-way trip, doesn’t it? I picked up my latest review, a 2013 Lexus GS 450h. Getting it home was another adventure, as it always is. 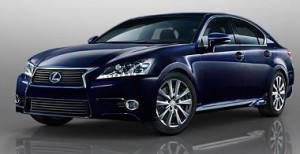