Clek’s president, Chris Lumley, is at the start of a three-month tour to introduce the Foonf prototype to retailers and other interested parties. When I saw that he would be in Southern California, I contacted Clek and told them that CarseatBlog’s readers would pee their pants with excitement (hopefully while sitting on Crypton fabric) to get some photos and info. Chris was indeed kind enough to meet with me and introduce me to the Foonf.

Before we get started, there is a lot of good information about the Foonf from the ABC Expo here, and information from Clek’s webinar here. Those posts have the basic measurements, features, etc., which I won’t rehash here, since not a lot has changed.

A few bits of new information:

By the time Chris and I met, it was late, dark and cold. (Cold by my standards, at least. Chris, being from Toronto, thought it was awesome.) This meant that my photos wound up not being the greatest, but hopefully they will help answer some questions about the Foonf.

Keep in mind that the Foonf Chris had with him is still a prototype, and some features will change slightly. The child in the photos is my daughter Anna, who will be 3 next month. She is slightly on the tall side for 3, and is more torso than leg (4T shirts, 2T pants). The car is a 2010 Honda Odyssey.

A few questions have surfaced about the Foonf, so I wanted to answer them.

1. Wow! That’s a tall seat! Will I be able to see out the back window?

This, obviously, will depend on several factors, including your type of car, your height, how the seat is installed, and how high the headrest is adjusted. However, I’m fairly confident in answering that for me in my car, even with the seat fully upright (rear-facing) and with the headrest extended all the way, the view out the back window is still pretty good.

I currently have a Monterey installed on the third row passenger side of my Odyssey. With the Foonf fully extended in the passenger captain’s chair (moved slightly to the center of the car), it took up just a bit more width in my mirror than the Monterey, and no additional height. Yes, it blocks a corner of the mirror, but not to the point that I would get nervous, and I get nervous about that kind of thing pretty easily.

It was too dark to get a shot of what the mirror looked like, unfortunately, but here is the view looking back from the front seat. 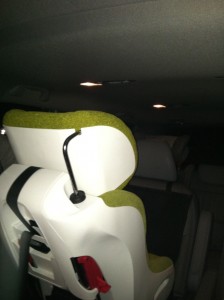 I was able to lift Anna in and out just fine. I did bonk her head on the door frame once, but I tend to do that anyway. The sides of the seat are low enough that it’s really not a problem. Again, the type of car you have might cause your results to vary.

Given the height of the base, I thought Anna might have trouble climbing in and out on her own. I worried for nothing, though. She scrambled right up and in when I asked her to.

No more than a MyRide, as it turns out. Fully reclined, the seat is taller than a MyRide, of course, but doesn’t take up any more back-to-front room. Upright, it takes up much less. Not bad for a seat that will last considerably longer.

Here it is, upright and reclined. 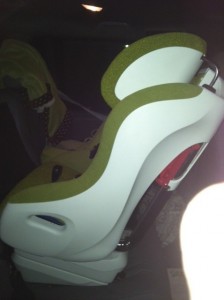 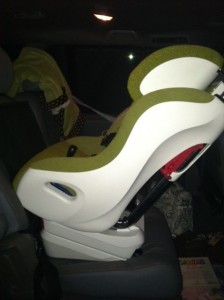 4. It looks like the headrest will push a kid’s head forward. What about head slump?

Anna wasn’t in the seat long enough to fall asleep, so I can’t answer for sure. She sure looked comfortable, though. Her head didn’t appear to be pushed forward in any unusual way.

Clek designed the seat to be compatible with active head restraints, which jut forward more than “traditional” headrests do. You can see how it plays nice: 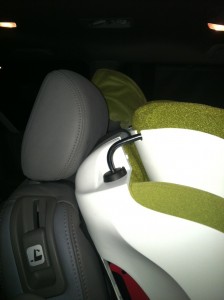 The production model will have the headrest back a bit farther than it is on the prototype, too, so it’s a bit early to measure head-slumpage issues.

My initial thought after having played with the seat is that it doesn’t look like it will cause any more or less slump than other seats installed at those particular angles. In other words, if you have the seat reclined, it won’t be an issue at all. If you have it installed very upright, you may very well get head-slump issues, but more because of the angle than the headrest.

Will the Foonf provide the most leg-room in its class? Probably not, but it’s not horrible either.

Here’s Anna sitting in it, in the most upright position. 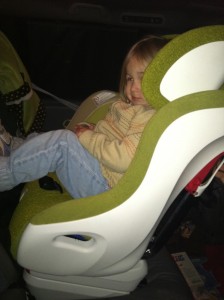 Keep in mind that she’s not “relaxed” here. I think she was afraid to have her feet touch the seat. When we were inside, Chris tried to put the recline bar on while she was sitting in it, and I kept telling her to move her feet out of the way, but she seemed petrified to put them on the fabric.

Ordinarily, she’d put her knees out and all would be well.

Keep in mind that with a seat as tall, long-lasting, upright, and well-built as the Foonf, there’s going to be some trade-off. Any very upright rear-facing seat is going to lose some room over one that’s more reclined. Bottom line: I’m not concerned about it, but if you have a leggy 6-year-old who can still fit rear-facing, you might want to try before you buy.

Yes! Here are a few more photos, just to give you a better idea of the seat.

Here is the bottom of the seat after removing the cushion to expose the rear-facing belt path and lockoffs. Cool! 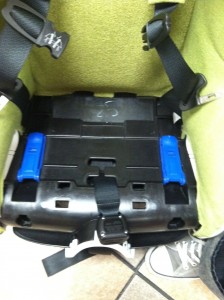 Here is how much room Anna has left to grow, rear-facing. (For reference, keep in mind that she wears 4T shirts.) 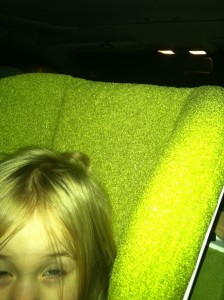 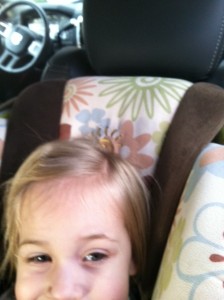 Here it is forward-facing. 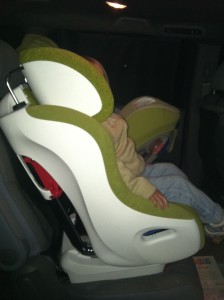 (Did you notice how beautiful it is next to the KeyLime Coccoro???)

So, what did we think?

I’ll admit I was a little skeptical going in, just because of the tall base. In practice, though, that doesn’t seem to be a huge issue. The biggest downside will likely be vision issues in some cars/situations, but that needs to be determined on a case-by-case basis.

My husband, who is no car seat expert but is probably smarter than the average bear just through putting up with me, was really impressed with the design and quality of materials.

What did Anna think? Well, after we were done in the car, we took the kids inside the fast-food place whose parking lot we used, and Chris bought the kids ice cream. When we went back out to the car to leave, Anna asked where her “new seat” was. I explained that it wasn’t our seat, and we couldn’t get one yet…and she cried all the way home, saying that she wanted “the new green seat.”

Looks like I need to start a Foonf Fund.

Thanks much to Chris at Clek for the ice cream and showing us the seat!