Home
Reviews
Cruisin’ for a Soothin’: A Review of the Fisher Price Cruisin’ Motion Soother
Tweet Pin It

Have you ever found yourself driving around with your crying infant at 3:00 in the morning because it’s the only way to get him or her to fall asleep? Wouldn’t it be nice if you could achieve the same effect in the comfort of your own living room?

This isn’t your typical vibrating-chair-thingy. Frankly, the monotonous vibration of similar products never did much for my kids. Instead, the Motion Soother both looks and acts like a car. No, it doesn’t actually drive your baby around the house, although that would be pretty cool. (They could combine it with a Roomba.) It does, however, shimmy and bump, replicating the motion of a baby’s car seat when strapped into a moving vehicle. (And it really does move that way. It amazed me how realistic it seems!)

While your baby is relaxing to the motion of the “car,” you can also play the included music or one of two sounds. When I tried the sounds, one was chirping birds, combined with either a strong wind or crashing waves. The other was a strange mechanical sound I couldn’t quite place. The next time I turned it on, though, it hit me: Windshield wipers in the rain! Very clever.

The Motion Soother also comes with a toy bar containing three vehicle-related toys: keys, a car with a ball to spin, and (my favorite) an adjustable rear-view mirror. The toy bar easily pops out or rotates back for quick loading/unloading of the baby. 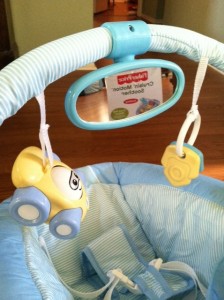 The Cruisin’ Motion Soother was remarkably easy to put together, unlike some other swing/seat-type products I have assembled. It did take me about 15 minutes, but that was without my husband’s power screwdriver and with the “help” of my older kids. With the automatic screwdriver and without my kids, I bet it would have been done in five minutes. There weren’t a whole lot of parts, and it pieced together very intuitively. 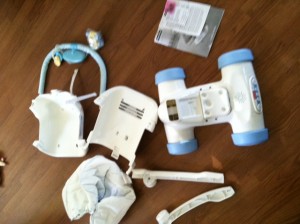 Another aspect I like is its small size. In all measurements (length, width, and height) it is very similar to an infant seat. That’s important to someone like me who doesn’t have a lot of room for elaborate baby devices. 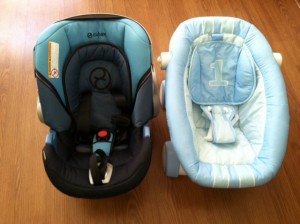 The Cruisin’ Motion Soother also gets the Husband Seal of Approval…from my husband, at least. He typically doesn’t have an opinion on baby items (“Sure, honey, whatever.”), but even he thinks this thing is awesome. He came home from work, saw it sitting in the living room, and said, “Oh, cool! Is that a race car?” I think he’s a little jealous that he doesn’t have one of his own.

He’s out of luck, though. The Cruisin’ Motion Soother is for babies up to 25 pounds and who cannot yet sit unassisted.

There are only two things I don’t like about the product, and they’re both minor. First, the controls are located at the bottom of the unit, underneath the seat. Because of the seat’s overhang, you can’t see them without putting your head practically on the floor. Once you’re used to them, though, you can pretty much go by touch. I’m also not sure how they’d work around that. Maybe a remote control that looks like a car’s key fob?

The other issue is that the toy bar has to be either all the way up or all the way back. The problem is that “all the way back” means “on the floor.” The bar stays attached (which is great) but it and the toys rest on the ground. Not a big deal, but I’m a bit of a germophobe, especially when it comes to baby things. It would be nice if it could stop part-way back.

Now, the million-dollar question: How does my baby like it?

I will admit that Oliver is a very easy-going kid. He usually doesn’t like not being held, though, so this could have gone either way.

We have been using the Cruisin’ Motion Soother for a couple weeks now, and he seems to like it a lot. Granted, he’s not in it often or for long periods of time, but I’ll set him in there while we eat breakfast or I take a shower. He usually stays in there happily until I come get him.

On Thanksgiving I put him in there while the rest of us played Monopoly, and he actually fell asleep! Then this morning, I put him in asleep, and he stayed that way.

The music and sounds don’t seem to do much for him either way, but I usually put on the windshield-wiper sound because I think it’s funny.

All in all, the Cruisin’ Motion Soother is a big winner in our home. The design is cool, the motion is innovative, and the little extras (like the wiper sound and rear-view mirror) serve as fun touches. I secretly hope Oliver takes his time learning to sit on his own so we can keep using it for a while.

Fine print: Do not use this as an actual car seat. The Cruisin’ Motion Soother requires 4 D batteries, not included.

Thank you to Fisher-Price for providing the Crusin’ Motion Soother for this blog review.

*UPDATE*: Just days after writing this review, I did discover a more significant issue with the Cruisin’ Motion Soother: It doesn’t have a shoulder harness. I noticed this right away, of course, but didn’t realize the potential problem with it until yesterday, when my not-yet-10-week-old practically climbed out of the device.

Oliver planted his feet on the bottom of the seat and pushed himself up until he was basically “standing” against the seatback, with the top of his head over the seat. His feet  were still restrained by the waist straps, but it was scary nonetheless.

Upon closer inspection, it looks like I had the waist straps a bit loose, but not much. I’m sure that would be a common problem with people who don’t realize their non-mobile child can find a way to flip out.

It should go without saying, but NEVER use this (or any other similar product, really) on a tabletop or other surface high off the ground.

I hope that Fisher-Price’s design team will find a way to add shoulder straps to this, because that would make it a nearly perfect product. Without them…I’m going to have to be much more cautious about using it.